Scientists Create the Smallest Possible Five-Ringed Molecule, Photograph It, and Call It Olympicene

While most people end up crafting stick figures in boring meetings, Graham Richards of the Royal Society of Chemistry (RSC)... 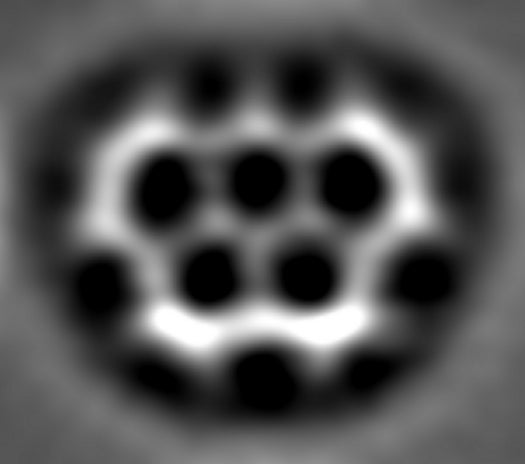 While most people end up crafting stick figures in boring meetings, Graham Richards of the Royal Society of Chemistry (RSC) was doodling when he thought making “a molecular structure with three hexagonal rings above two others would make for an interesting synthetic challenge.”

In an attempt to make casual daydreamers feel even worse, Richards and a team of chemists from the RSC, University of Warwick, and IBM Research–Zurich got to work, synthesizing and photographing olympicene with remarkable resolution.

The molecule has the smallest possible five-ringed structure (about 1.2 nanometres in width, or 100,000 times thinner than a human hair) and requires some serious hardware to catch a glimpse of.

The scientists at IBM employed non-contact atomic force microscopy, which IBM has used before on another molecule. It uses a tiny cantilever with a nanoscale point at the tip to scan over the molecule in an ultrahigh vacuum at 5 degrees Kelvin, and then delivers an image back to researchers.

But it’s more than just a neat way to look at things: Olympicene is part of a family of compounds related to single-layer graphite, also called graphene, that have shown some practical promise in the fields of optics and electronics.

[via University of Warwick]