Teleportation, sci-fi-y as it sounds, is actually not fictional or even new; two years ago, Chinese physicists broke the then-current... 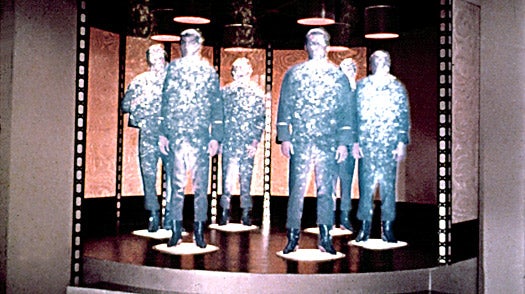 Teleportation, sci-fi-y as it sounds, is actually not fictional or even new; two years ago, Chinese physicists broke the then-current record for quantum teleportation by teleporting photons over 10 miles. But a new effort from that same team demolishes that record, beaming the photons over 97 kilometers.

The physicists, working from the University of Science and Technology of China in Shanghai, have again taken advantage of quantum entanglement for the purposes of moving an object from one place to another without ever moving in the space between. According to Technology Review, “The idea is not that the physical object is teleported but the information that describes it. This can then be applied to a similar object in a new location which effectively takes on the new identity.”

The task uses a 1.3-watt laser “and some fancy optics” to beam those photons and retrieve them at the final location. The trick seems to be maintaining the photons’ information, since the beam widens over space, but eventually teleportation of this sort could be used to beam information incredibly quickly up to satellites.