The first human eggs grown from human stem cells could be fertilized with human sperm cells later this year, potentially... 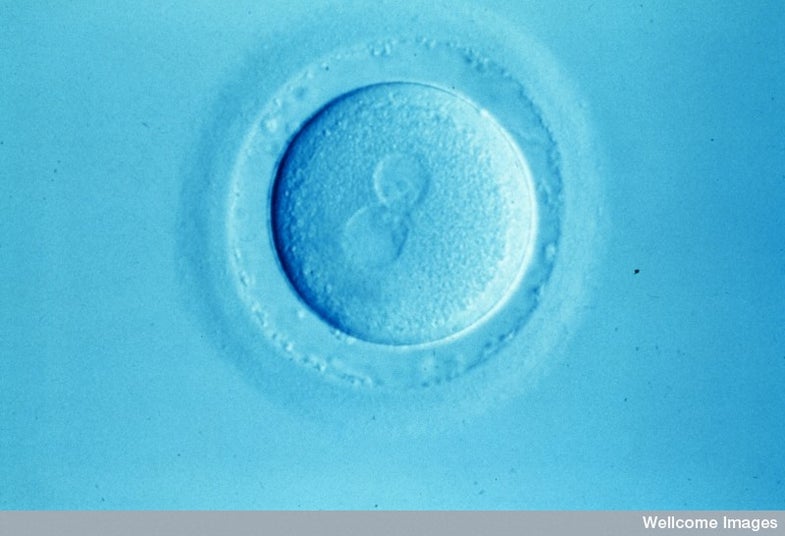 The first human eggs grown from human stem cells could be fertilized with human sperm cells later this year, potentially revolutionizing fertility treatment for women. This could be one more step on the path toward reproduction sans human interaction — in this case, a potential parent wouldn’t even need to donate her eggs. But it could also turn stem cells into an infinite loop, of egg cells into embryos into stem cells, and on and on, in a fractal-like repetition of reproduction.

In February, we heard about a study involving Japanese women whose reproductive stem cells were donated because they were undergoing gender reassignment surgery. Researchers at Massachusetts General Hospital were able to coax these ovarian stem cells into becoming immature human egg cells, which were then incubated in mice so they’d have the proper ovarian structures. Now these same scientists, working with a team at Edinburgh University, want to fertilize them.

After sperm implantation, the scientists would watch the blastocysts develop into embryos for two weeks — the legal limit — and determine if they’re viable. Then these embryos would either be frozen or “allowed to perish,” according to the Independent. The tests would validate the stem-cell-derived human eggs, more properly called oocytes, and serve as an early indicator of whether they could someday be used to eradicate infertility.

Stem-cell derived oocytes could replenish the stocks of women undergoing menopause, or they could be used to allow infertile women to reproduce. The Independent goes so far as to mention an “elixir of youth,” wherein women of any age are full of stem-cell derived oocytes, remaining fertile and youthfully healthy forever.

This potential stem cell-based embryo construction still faces some hurdles — reproductive biologists are applying for a license to the Human Fertilisation and Embryology Authority in the UK. But if it’s approved, the eggs could be fertilized this year, according to the Independent.

Stem cells hold such great promise because they can differentiate into any cell, potentially replacing neurons, islet cells, kidney cells and more. But this research conceivably turns stem cells into an infinite supply of cellular material. The stem cell eggs would obviously most likely be used to help women conceive a child, but it’s not a huge leap to much more frightening scenarios: Stem cells turned into human egg cells, which could be fertilized to grow embryos, which would contain more stem cells, which could in turn be harvested …. and so on, as self-contained stem cell factories. It will be interesting to see how the UK authority interprets the possibilities.