Merry Christmas, scientists! It’s that time of year again when all rational human beings shake our heads in amusement at... 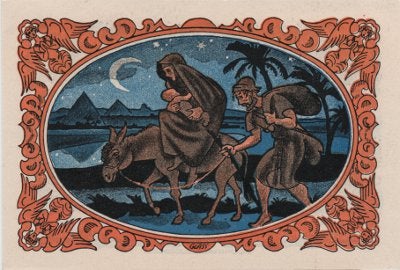 Merry Christmas, scientists! It’s that time of year again when all rational human beings shake our heads in amusement at those crazy, miracle-believers and their improbable stories. Flying reindeer? Walking on water? St. Nicholas’ ability to ingest mass quantities of cookies without succumbing to diabetes and other obesity-related health problems?

But science has actually been freaking us out lately about the most outlandish of all the biblical stories, and we’ve been forced to consider that maybe Mary wasn’t lying about that whole virgin birth thing. Just last week, a study came out with a number of women self-reporting that they had conceived without having had sex. The study raises all sorts of questions about the accuracy of self-reporting, and was coauthored by an Episcopal deacon, but whether you believe in God or starstuff, it’s fun to ponder: could Jesus have been conceived without Mary and Joseph getting it on? Let’s explore some possible theories.

Theory One: Bumping Uglies
If Mary and Joseph were into each other, but Joseph was still only betrothed to Mary (who was, in this case, 12 or 13 years old and still living at home), they might have wanted to lay with each other without Mary’s mom being any the wiser. Under these circumstances, we could imagine that Mary and Joseph might have done as many a horny-young-thing has done, and engaged in some genital-to-genital rubbing, like our bonobo brothers and sisters.

While Mary swore she was a virgin, there’s no way to prove such a claim, as hymens can break from non-sexual activity and sexual intercourse doesn’t always break them. A 2004 study published in the Archives of Pediatric Adolescent Medicine found that “[s]ubjects who admitted having past intercourse still had non disrupted, intact hymens in 52% of cases.”

Even Joseph thought Mary’s virgin birth story was iffy, and at one point was so sure Mary had lain with another that he was ready to divorce her. But assuming Mary was still a virgin and faithful to Joseph, it is possible (though way more miraculous) that pre-ejaculate (pre-cum) did the job. Pre-cum is an alkaline fluid released by the Cowper’s glands, which are located at the top of a man’s urethra just below the prostate. The jury is still out on whether pre-cum itself can contain sperm, although a 2011 study suggests that it can. Otherwise, semen left behind from a previous ejaculation could have possibly hang around in Joseph’s urethra, with the sperm protected from the urethra’s acidity by alkaline pre-cum, and then hitched a ride to Mary’s vagina when Joseph got aroused.

The verdict
Could Joseph have knocked Mary up before they “came together?” It doesn’t look too promising, but the research is incredibly weak. Right now, we’re stuck with a handful of obscure case studies and anecdotal evidence that it’s not only theoretically but actually possible to get pregnant this way. More research is definitely needed!

Theory Two: Parthenogenesis
In order for Jesus to be the son of God, Mary’s husband had to be cuckolded—investing parental resources in an offspring that was illigitimate, however holy. But the Lord would have had to work some serious magic to knock Mary up while preserving her virginity without having a penis of His own. Enter: cloning. This would make the virgin birth of Jesus totally logical (in Bible logic), in that he would receive his mother’s sinless soul — which she received through her Immaculate Conception — and the Holy Spirit would enter him through her. Would also explain why he doesn’t look anything like Joseph.

The process
The specific method of cloning that would result in a woman giving birth without male fertilization of the egg is called parthenogenesis (Greek for “virgin birth”). The first mention of parthenogenesis was by Swiss naturalist Charles Bonnet, who observed that aphid eggs develop into aphids without the involvement of sperm. Fast-forward 273 years and we have now observed parthenogenesis in a range of insects, komodo dragons, sharks, snakes, and even mice.

As the BBC reported, the first vertebrate cloning ever observed in nature (without researchers’ futzing around with the animals’ reproductive organs) happened in a captive boa constrictor, who gave birth to not one but two litters of clones from unfertilized eggs, each of which held a recessive mutation that led them to be caramel-colored. The crazy part about this was that mom was not caramel-colored herself, nor were any of the males. Whoa. This led researchers to investigate her babies’ DNA, finding that they had indeed not only been created by cloning, but that, in the cloning, had created a new gender. While humans’ chromosomes are XX (for female) and XY (for male), snakes’ and many other reptiles’ chromosomes are different: male snakes are ZZ, and female snakes are ZW (the Z chromosome from the father, the W from the mother). Yet, all of the snakes in these litters were WW, further suggesting they had been produced entirely from two of mama’s chromosomes. WW vertebrates had never been observed in the wild before this, and had never survived in lab tests. This was the first vertebrate cloning ever observed in nature, and it was pretty damn cool.

The verdict
What does this mean for Jesus? Turns out, not much. The problem with this theory is the parthenogenetic progeny of mammals would have two X chromosomes, and would therefore be female, as the lab-cloned mice were. Because human moms don’t have any Y’s lingering around, we can’t produce a crazy new gender (YY) or even come up with an XY male without sperm’s help. Unless the patriarchy lied about Jesus’ sex, this theory’s shot.

Theory Three: Jesus Was a Chimera
There is one last theory that takes the best of each of these and combines it into a Christmas miracle.

While parthenogenesis appears to be a smart survival strategy for species that are under ecological stress or stranded alone without any dudes, in mammals it is limited by a process called “genomic imprinting,” where one set of genes from mom or dad dominates over the other. The dominant genes are set before fertilization — so a virgin mama could end up giving her parthenogenetic offspring two inactive development genes, ensuring development is a non-starter, or two active genes, which causes overdevelopment and the formation of tumors called benign ovarian teratomas. Parthenogenetic mammals are able to begin developing into embryos despite this limitation because the genes required for fetal development are fully expressed on the maternal genome. The resulting embryos are not viable, however, as the code to allow for development past the embryo stage require paternal genomic imprinting. If a woman had an as-yet-never-seen genetic mutation in one of her two X chromosomes that removed the development gene from just that chromosome, then extra-embryonic development might proceed without sperm’s imprint intervention. Or, in theory, an egg could be cloned by mom, develop through the embryonic stage, and then get fertilized by a male’s sperm.

Not only could it happen, it actually has.

The process
In 2005, researchers from the University of Edinburgh reported the discovery of “FD,” a healthy, living three-and-a-half-year-old boy who was initially formed through parthenogenesis, but whose mother’s egg was later fertilized by her husband. Basically, right when the cell first split, researchers posit that the sperm got into and fertilized the second blastocyst formed in mitosis, leaving the rest of the cell splitting to occur separately off of both the unfertilized and the fertilized cells. While all of the cells required in development of key structures (such as the spine, skin and organs) derived from X and Y chromosomes from the fertilized egg, as would be expected, FD’s blood was completely made up of parthenogenetic cells from the unfertilized egg, leading all blood DNA tests to identify him as female. Aside from some mild developmental disability and small testes (those were formed by mom’s parthenogenetic cells!), FD seemed not only healthy but likely to father his own healthy children when that day came.

FD gives us evidence that, presuming god existed and wanted to induce a pregnancy in Mary, he could have started the process himself by creating a parthenogenetic oocyte (see more on how unlikely that is, here). Then Joseph could have helped little Jesus grow with his sperm’s genomic imprinting, making Jesus both the son of God and of man in the holiest three-way in history.

The Verdict
Is it incredibly unlikely? My God, yes. But to me, that’s what makes it a scientific miracle.

Khadijah Britton is a starstuff-and-God believing Christian who writes about science, law, technology and politics, often through a social justice lens.