Scientists could use the technique to reconstruct almost any intricate bone shape in the lab, using digital images as a model 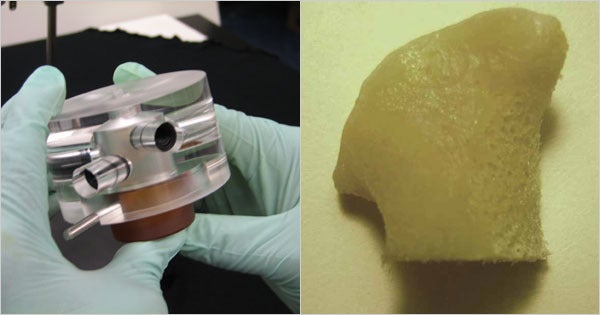 Figuring out a good bone replacement for limbs has proved a problem since the days of the wooden peg leg. Yet scientists have now grown two small bones based on digital images and a 3-D scaffolding, the New York Times reports.

The recent bone work comes from Columbia University, where biomedical researchers led by Gordana Vunjak-Novakovic first created their replica scaffolding based on digital images of an intact jaw bone. Such work has helped solve the problem of how to create lab-grown bones in the exact shape of the originals.

Vunjak-Novakovic’s group converted the bone material scaffolding into living tissue by placing it in a similar-shaped chamber, and added human stem cells extracted from bone marrow or liposuctioned fat. The bioreactor chamber then fed oxygen, growth hormones, and nutrients to the bone.

Another team at the University of Michigan plans to recreate jaw bones within the human body itself. It will create its bone scaffolding based on a printer laser system and CT scan, and then fill the scaffolding with cells taken from the patient who requires the bone replacement. Once implanted, the scaffolding would get absorbed by the body.

Developments such as these could do away with the need for painful bone grafts or using materials such as titanium that aren’t completely biocompatible with host bones. It’s almost a shame, really — wooden synthetic bones better than anything 18th-century pirates had were just making a comeback as artificial bone material substitutes.