Instead of building super-strong yet flexible structures to withstand earthquakes, what if you built your house to levitate on a... 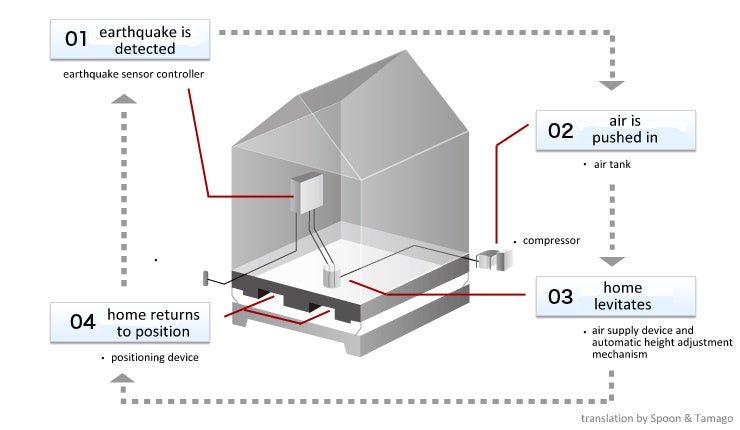 Instead of building super-strong yet flexible structures to withstand earthquakes, what if you built your house to levitate on a cushion of air? This is already being employed in Japan, a little less than a year after the massive earthquake and tsunami that devastated the country.

The levitation system is the brainchild of a company called Air Danshin Systems Inc., which the Japanese-culture-and-art site Spoon & Tamago says roughly translates to “anti-seismic.” It was founded in 2005 but has caught on after the March 11, 2011 Tohoku earthquake.

It consists of a sensor network, an air compressor and an artificial second foundation beneath the home’s bottom level and just above the ground. An earthquake-sensitive motion sensor recognizes when the earth is unstable, and an air compressor activates within half a second to fill the space between the building and the ground. It can lift a structure 1.2 inches off the ground, according to a report in DigitalTrends.

While the earth moves, the levitating home would stay still, protected by the air cushion. Apparently 88 homes in Japan already had this home-airbag system as of last summer.

There’s even a video demonstration below — seems like it works pretty well. (Why didn’t they let the old guy sit in the comfortable chair?)

The whole thing seems like a good idea, if slightly impractical — it would not be easy to lift a home off the ground and install this second artificial foundation. But then again, it would be better to install this rather than let the earth move your house for you.