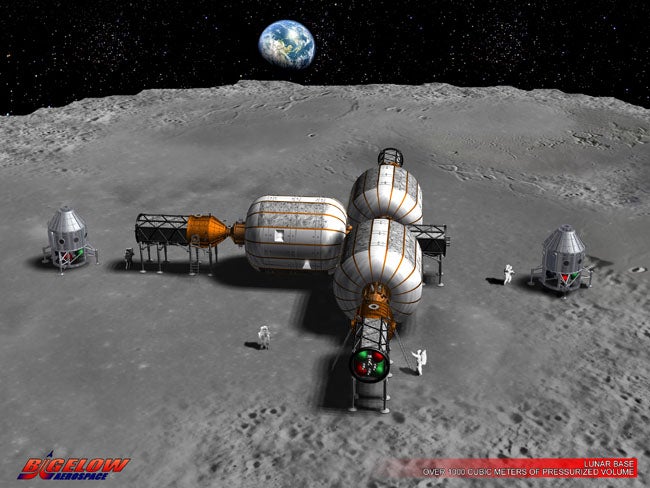 Robert Bigelow’s inflatable space stations could get another look from NASA because of the space agency’s new direction, but the space hotel visionary has already set his sights on the moon. He has begun planning for inflatable modules that could serve as a lunar base for up to 18 astronauts, SPACE.com reports.

The moon base would consist of three BA-330 inflatable units which each offer 11,653 cubic feet of space and contain their own propulsion and power units. Such units could be joined together in lunar orbit or even farther out before flying down to a selected surface location.

It’s not a huge stretch for Bigelow and his company Bigelow Aerospace. The space mogul has drawn up plans for parking inflatable habitats around the Lagrangian point L1 — a stable orbital point between the moon and the Earth — as well as orbital depots that could supply outbound Mars missions.

Bigelow Aerospace has also teamed up with Boeing for a commercial transport system that could move astronauts among the International Space Station, Bigelow Aerospace’s Orbital Space Complex, and other orbital destinations.

The company even proposed a modified Orion crew capsule for NASA’s cancelled Constellation program to carry cargo and crew into space — though that capsule has since undergone a resurrection as the space station’s future escape pod. It seems like inflatable habitats aren’t the only space technology getting a second chance under the new N4ASA.