6 of the most important drug milestones of all time

From arsenic to Prozac to the passage of the Pure Food and Drug Act. In The Drug Book, author Michael C. Gerald details 250 milestones in the history of drugs, from the introduction of arsenic and Xanax to the passage of the 1906 Pure Food and Drug Act, the first major legislation aimed at protecting the public from dangerous medications. We asked Gerald, a professor emeritus of pharmacy at the University of Connecticut, to select a handful of the most important milestones. Read on to see what he picked. 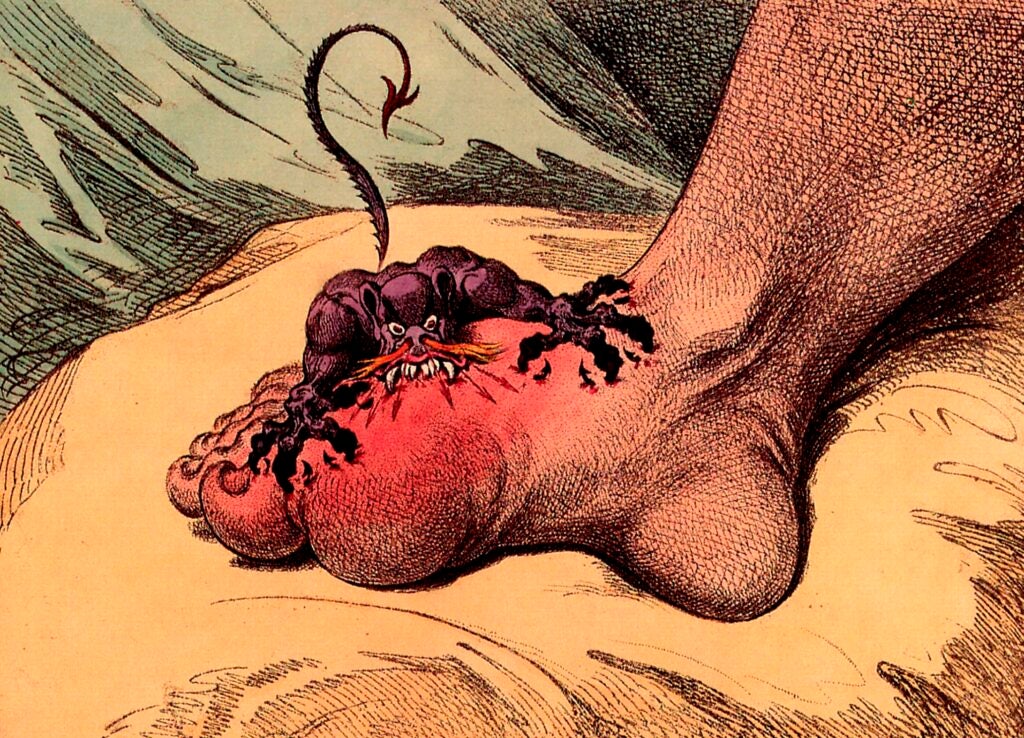 Used to prevent attacks in individuals afflicted with frequent and recurrent episodes of gout.

Descriptions of gout date back almost 5,000 years to ancient Egypt and are included in the Smith and Ebers Papyri. The most prominent symptoms of gout—a type of arthritis—are swelling, redness, and intense joint pain that most commonly affects the big toe and that may persist for days to weeks. In this condition, crystals of uric acid—the normal end-product of purine metabolism—deposit in the joints.

In his classic work De Materia Medica (Regarding Medical Matters), written in approximately the year 70, Dioscorides describes the use of Colchicum (meadow saffron) seeds to treat gout. Extracts of the seeds were used well into the nineteenth century. Colchicine, an alkaloid and the active constituent in Colchicum, was extracted and isolated from the seeds in 1820 by the French chemists Pierre-Joseph Pelletier and Joseph Bienaimé Caventou.

Colchicine is very selective and effective in its ability to relieve the pain and swelling seen with acute attacks of gout but not with other types of arthritis. It is also used to prevent attacks in individuals afflicted with frequent and recurrent episodes of gout. Colchicine use has declined and has been replaced by less toxic drugs, such as Benemid, which increases the elimination of uric acid in the urine, and Zyloprim, which reduces uric acid synthesis in the body.
Combating the “Disease of Kings.” Gout has long been considered a “disease of kings,” or at least of the very wealthy, because of their overindulgence in rich foods and alcohol. (It has now been downgraded to a middle-class disease.) Among the many famous gout sufferers were King Henry VIII, Thomas Jefferson, Martin Luther, Charles Darwin, and Benjamin Franklin. Franklin used Colchicum extract while serving as the Ambassador to France (1776–1785) and introduced the drug to his fellow Americans. He also offered the following sage advice: “Be temperate in wine, in eating, girls, and cloth, or the Gout will seize you and plague you both.” 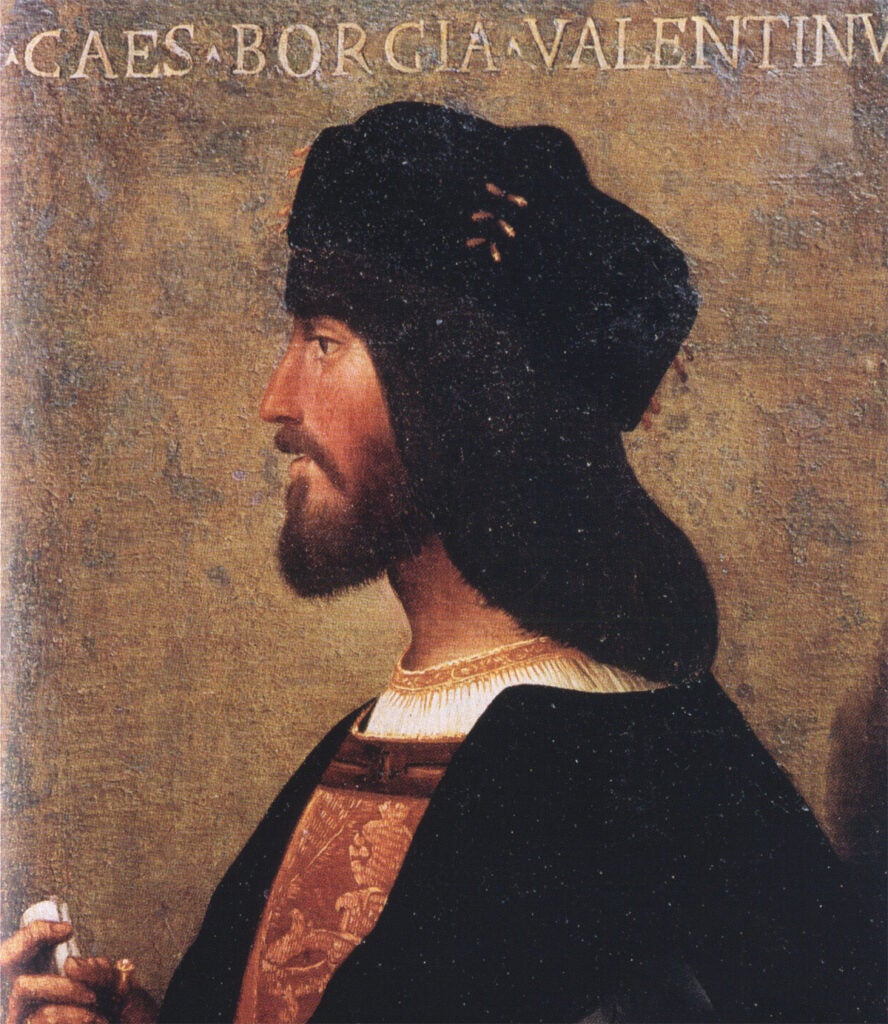 Arsenic’s role as a medicine, however, is dwarfed by its esteemed reputation as a poison between the times of ancient Rome and the nineteenth century

When arsenic comes to mind, few think of its medical uses, which date back to ancient Greece and China more than two millennia ago. More recently, potassium arsenite— now a reputable anticancer treatment—was sold as an early cure-all medication in 1786. Of far greater significance, arsphenamine (Salvarsan), an organic arsenic-containing drug, was the first authentic cure for syphilis, which plagued humankind beginning in the sixteenth century.

Arsenic’s role as a medicine, however, is dwarfed by its esteemed reputation as a poison between the times of ancient Rome and the nineteenth century. It was first isolated as an element in 1250. The poison of choice for nefarious professionals, arsenic trioxide (white arsenic) is colorless, nearly tasteless, and readily dissolvable in water and other drinking liquids. Thus, victims are oblivious to their impending doom. While the signs and symptoms of strychnine and cyanide poisoning are obvious, family members, physicians, and authorities might unwittingly attribute arsenic-induced vomiting, diarrhea, and muscle cramps to any number of ailments.

Among the most infamous and highly successful early poisoners was Agrippina the Younger. Sister of Caligula, she used arsenic to dispose of her husband, freeing her to marry the Roman emperor Claudius, her uncle. Many poisonings later, her sixteen-year-old son Nero became emperor. “La Cantarella” arsenic trioxide powder was a family trademark perfected by the Borgias of Renaissance Italy—particularly Rodrigo (Pope Alexander VI) and his children, Cesare and Lucrezia. La Cantarella was said to induce a deep, death-simulating sleep lasting for four hours, during which time the user had no detectable pulse. Juliet may have taken this potion while awaiting Romeo. Two centuries later, Tofana of Sicily’s arsenic solution Aqua Tofana was reportedly responsible for the deaths of 500–600 persons.

The epoch of the “inheritance powder” declined significantly in 1836, when the British chemist James Marsh developed an irrefutable and highly sensitive chemical test for the presence of this poison in tissues. 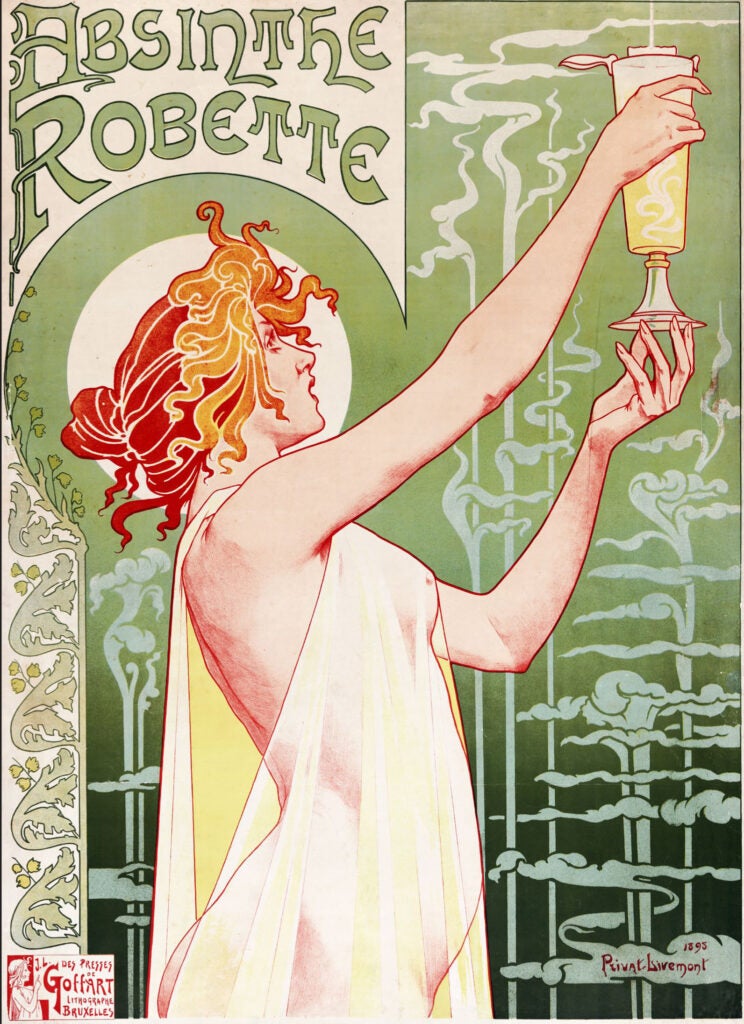 During the early years of the twentieth century, absinthe drinking lost its mystique and was linked to violent crimes and social disorder.

Switzerland has the dual distinction of being the first country to commercially manufacture absinthe in the 1790s and among the first in Europe and North America to ban it one century later. During the intervening period, the “green fairy” was mythicized in the works and by the drinking habits of artists and writers living in France, including van Gogh, Manet, Toulouse-Lautrec, Picasso, Baudelaire, Hemingway, Rimbaud, and Wilde.

During the early years of the twentieth century, absinthe drinking lost its mystique and was linked to violent crimes and social disorder. This led to bans on its manufacture in much of Europe (excluding the United Kingdom) and the United States. In the 1990s, the hazards of absinthe were reevaluated, and the potent liquor was returned to the shelves worldwide.

Absinthe is a spirit containing 50–75 percent alcohol, anise (imparting its flavor), fennel, and the leaves of wormwood (Artemisia absinthum). The wormwood leaves contain thujone, absinthe’s chief behaviorally active constituent, and its characteristic green color is the result of chlorophyll in the herbs. The method used to prepare the drink generally involves pouring ice-cold water over a sugar cube into a glass that contains the spirit. 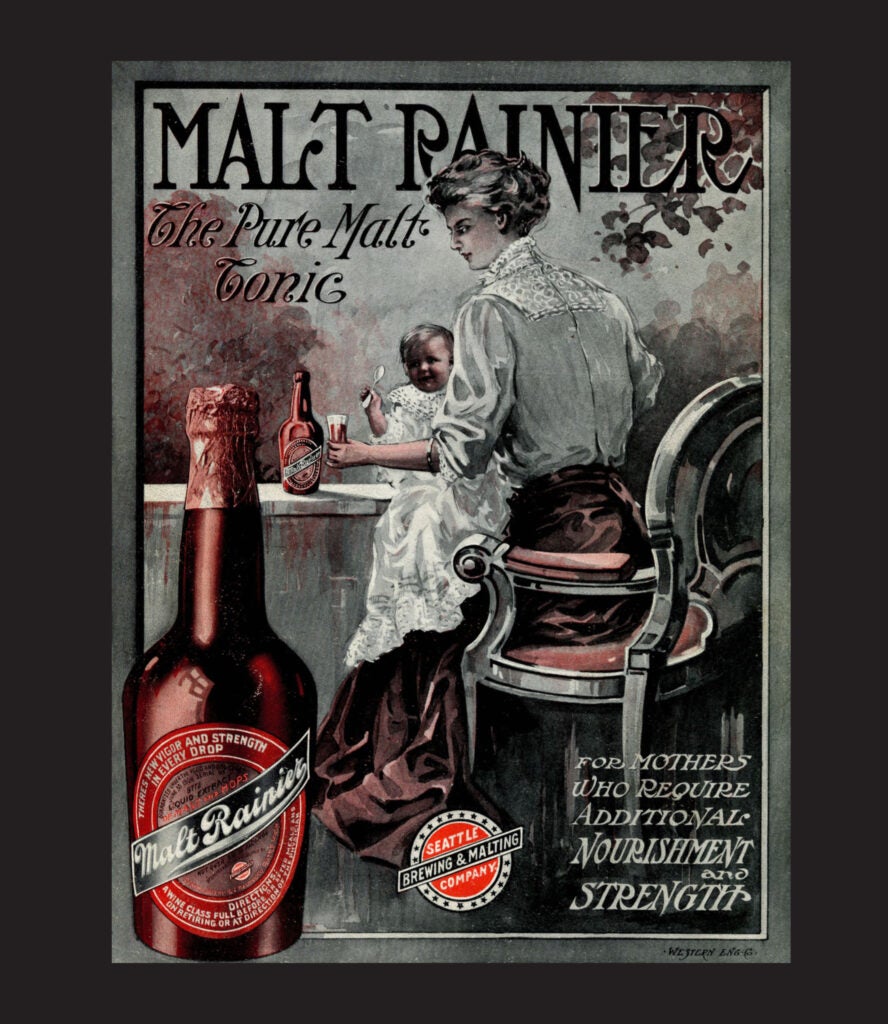 The rapidly enacted Pure Food and Drug Act prohibited adulterated and misbranded foods and drugs and destroyed the cloak of secrecy concealing the presence of potentially harmful and habit-forming patent medicines.

Many of the best-selling patent medicines available at the turn of the twentieth century claimed to not only benefit but actually “cure” a range of medical problems, including cancer, infertility, tuberculosis, epilepsy, and “female complaints,” to name very few. Although they contained secret formulas, none contained “harmful” ingredients—or so claimed testimonials or the creative pens of manufacturers. Two monumental works by American activists destroyed these long-held myths and led to the passage of the first federal legislation enacted to protect the public from unsafe medications—the Pure Food and Drug Act, which President Theodore Roosevelt signed into law in 1906.

Upton Sinclair’s 1906 novel The Jungle was written with the intent of exposing the meat-packing industry and the exploitation of its workers. The revolting and grossly unsanitary conditions Sinclair described in the preparation of meat products succeeded in catching the public’s attention. In October 1905, the first of an eleven-article series titled “The Great American Fraud,” authored by the investigative reporter Samuel Hopkins Adams, appeared in Collier’s Weekly. In these articles, which were reprinted the following year as a book, Adams exposed the false claims patent medicine manufacturers made for their products and the harmful and even dangerous nature of their ingredients.

The rapidly enacted Pure Food and Drug Act prohibited adulterated and misbranded foods and drugs and destroyed the cloak of secrecy concealing the presence of potentially harmful and habit-forming patent medicines. Although the act did not outlaw the inclusion of alcohol, morphine, opium, cocaine, or cannabis in nonprescription products, products containing these substances had to disclose their presence and amounts. To some, Adams may be better known as the author of “Night Bus,” a short story that served as the basis for the 1934 film (and winner of five major Academy Awards) It Happened One Night, starring Clark Gable and Claudette Colbert. 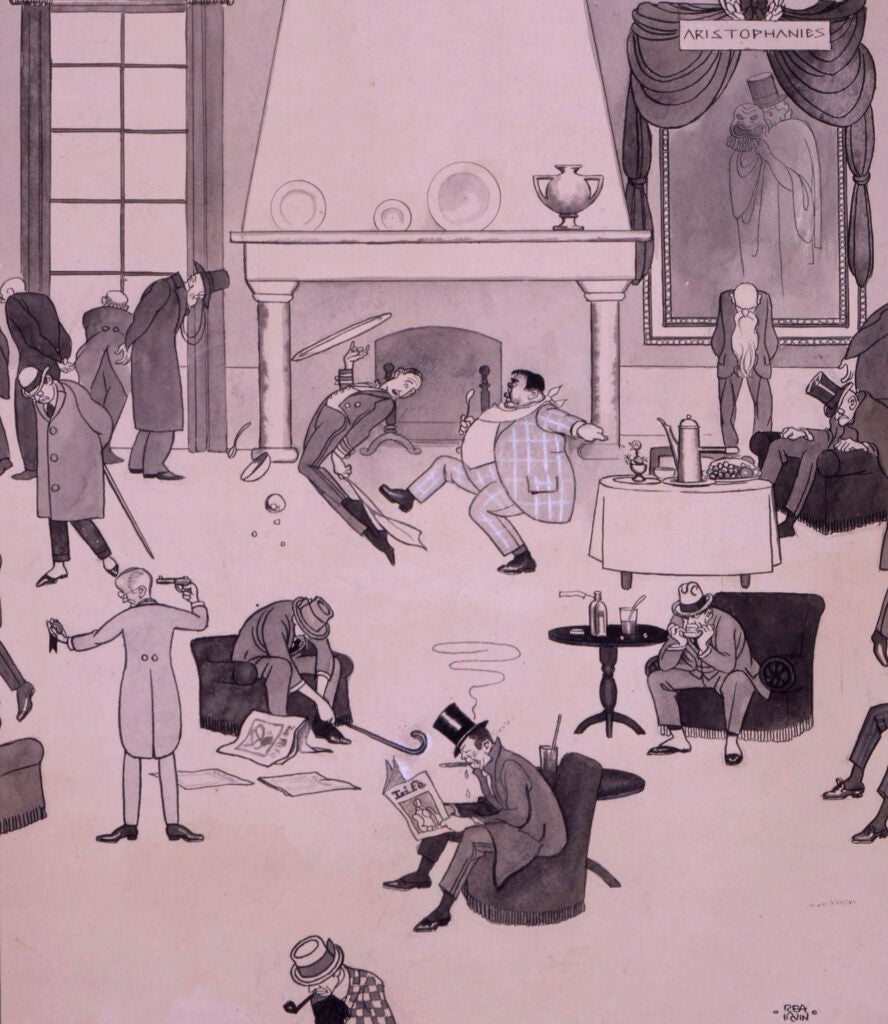 The approved medical uses of the SSRI differ somewhat around the world but often include anxiety and panic disorders, obsessive-compulsive disorders (think Lady Macbeth), and clinical depression.

Prozac and its half-dozen “band of brothers”—selective serotonin reuptake inhibitors (SSRIs)—are the most commonly prescribed class of antidepressants, in spite of questions regarding their effectiveness. However, there is no question that SSRIs cause fewer side effects and are safer when taken in overdose than the tricyclics.

During the 1970s and 1980s, the link between serotonin and depression became more convincing. Interest focused on the SSRIs, drugs that preferentially increase serotonin at mood-influencing sites in the brain. Prozac (fluoxetine), first approved in 1987 and marketed the following year, was later joined by Celexa, Lexapro, Luvox, Paxil, and Zoloft, plus a generous number of generic equivalents.

The approved medical uses of the SSRI differ somewhat around the world but often include anxiety and panic disorders, obsessive-compulsive disorders (think Lady Macbeth), and clinical depression. When used to treat severe depression, they start producing their beneficial effects in two to four weeks, which is comparable to the tricyclics. To reduce the risk of relapse, a common concern, antidepressants are generally taken for at least six months—and, often, for years—after recovery. Some 20– 25 percent of individuals who abruptly stop taking these medications experience SSRI discontinuation (withdrawal) syndrome.

Notwithstanding their marketplace success, the use of SSRIs is embroiled in controversy. Some 30–40 percent of depressed patients receiving placebos improve, which complicates studies attempting to objectively demonstrate the effectiveness of SSRIs. Two critical meta-analyses of multiple studies appearing in 2008 and 2010 concluded that, when compared with placebos for the treatment of mild to moderate depression, SSRIs provided little or no benefit. SSRIs were, however, quite effective for treating severe depression. Regulatory agencies in the United States and United Kingdom have concluded that SSRIs can increase suicidal thoughts in children, adolescents, and young adults up to the age of twenty-four, although suicide attempts have not increased. This risk has not been shown for adults.

When Eli Lilly’s patent for Prozac expired in 2001, they rebranded Prozac as Sarafem—same drug, different color capsule—at a much higher price than generic fluoxetine for “premenstrual dysphoric disorder.” 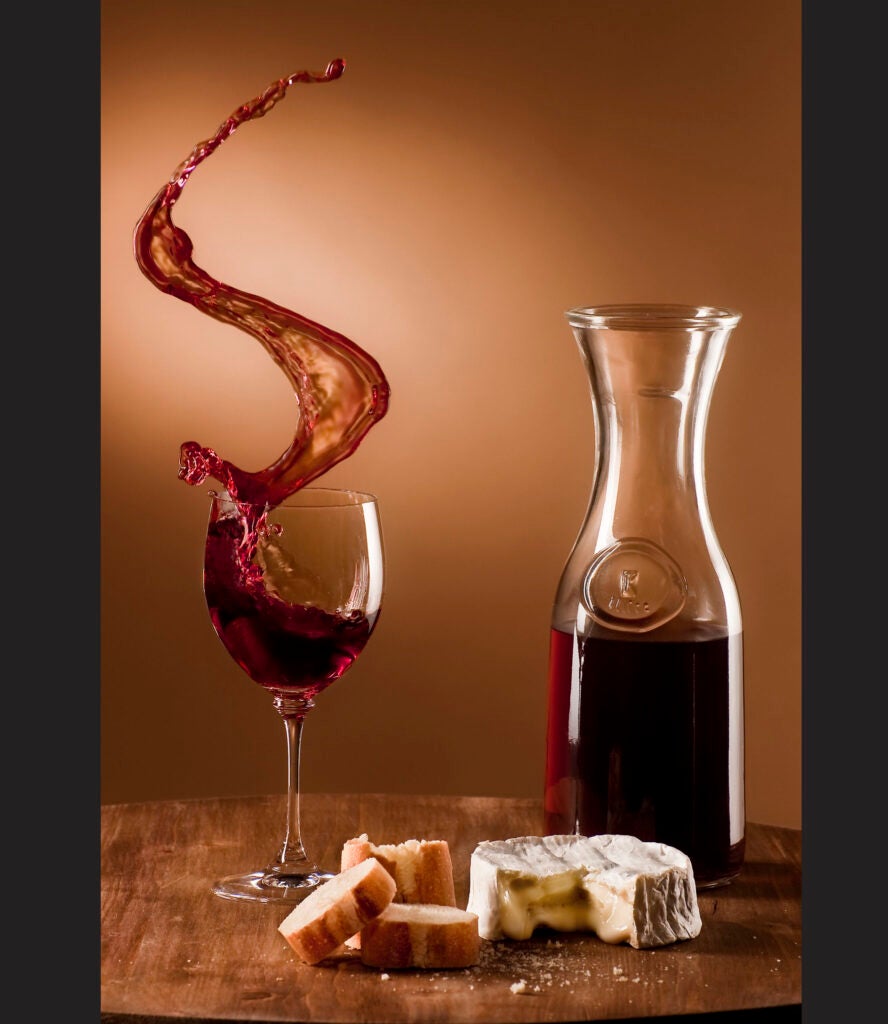 Resveratrol, found in the skin of grapes and in red wine, is said to have health-promoting effects.

The French diet is high in heart-unhealthy saturated fats, yet the French are reported to have a low incidence of heart disease. This so-called French Paradox was first brought to viewers’ attention in a 1991 broadcast of 60 Minutes, with the suggestion that an ingredient in wine, when consumed in moderation, protects the heart.

Did Methuselah Drink Red Wine? Resveratrol, found in the skin of grapes and in red wine, is said to have health-promoting effects. This antioxidant is thought to protect the cells against free radicals, which damage cells, potentially shielding us from heart disease and cancer. Results of studies published in 2003 reported that resveratrol extended the lives of yeasts, worms, fruit flies, and short-lifespan fish. Mice fed a high-fat diet and treated with resveratrol had lower rates of obesity and diabetes, strong risk factors in heart disease. (To get a mouse-comparable dose of resveratrol, a human would have to consume 100 to1,000 bottles of red wine each day!) Other animal studies pointed to its anti-inflammatory and antidiabetic effects, its protection against brain plaque formation associated with Alzheimer’s disease, and its reduction of skin cancer rates when applied to the skin.

After reading the promotional literature for resveratrol-containing dietary supplements found on the Internet, one reaches the inescapable conclusion that these same health benefits occur in humans. To date, we still anxiously await such positive findings. When taken as a pill, resveratrol is extensively broken down in the digestive tract and, after circulating in the blood and reaching the liver, is rapidly inactivated.

The pharmaceutical company Sirtris continues work on developing a synthetic resveratrol-like drug. This drug is theorized to work by activating SIRT1, a protein thought to extend the life of mice and, presumably, humans. For now, delay plans to celebrate your 120th birthday.