Sweetest Little Warbird in the Sky

You can buy a MiG if you have the jack, but a Czech trainer is the jet to love. 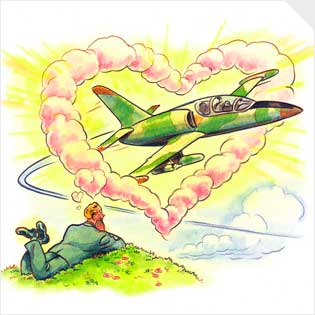 Thirty-six years ago, the talented Czech aeronautical engineer Jan Vlcek designed a remarkably handsome two-seat, single-engine military jet. Vlcek hoped his Aero Vodochody L-39 Albatros would be adopted as the primary trainer for all Warsaw Pact air forces, and in 1972 it was. From then until the collapse of communism, the L-39 schooled generations of Russian, East German, Czech, and Ukrainian farm boys, who stepped straight from its cozy little cockpit into enormous MiG-21s, -23s and -29s.

What Vlcek never in his wildest dreams imagined, however, was that the L-39 would become a toy of the very American capitalists it opposed.

Dial forward a few years. In 1997 Carl Ludwig, a shy, obsessive electrical engineer and software maven (he was one of the pioneers of cinematic computer animation, having developed the digital film recording equipment used on Tron) went to an airbase outside Moscow. After drinking far too many vodka toasts, Carl and a friend bought two L-39s from a Soviet Air Force colonel who may or may not have been entirely authorized to sell them. Never mind, they got the proper seals, stamps, signoffs, and export papers, and the L-39s were soon on trucks, across the border, and aboard a ship. Carl’s arrived at the airport in Montgomery, New York, where my own airplane was based, in a shipping crate the size of a Manhattan studio apartment.

I’d known Carl ever since he started flying a Beech T-34 ex-Air Force trainer and driving the very first Porsche 911 in our little town-he still owns both-and immediately volunteered my meager talents to the L-39 project. Carl spent two years reassembling his Albatros. (His buddy got cold feet and sold his at a nice profit without ever taking it out of the box.) We worked together rewiring the Albatros and installing modern avionics, and it quickly became apparent why L-39s would become the most popular of all privately owned jet warbirds. Even perched on jackstands in its weathered Soviet camouflage-the Russians had crudely chiseled off the red stars-Carl’s plane was a beauty. It looked like a potent fighter, not a docile trainer. Big tiptanks counterbalanced the ends of stubby, low-aspect-ratio wings. A thrusting needle nose trailed back over a tandem-seat Plexiglas canopy to a tall fin and a fat turbofan tailpipe.

When it was ready, Carl had it painted in the absolutely authentic colors of the Royal Thai Air Force’s 102nd Fighter Squadron, which operates nicely armed ground-attack L-39s. This was a plane to love. At $600,000 a pop, the cleanest, lowest-time L-39s are today more valuable than better-known jet fighters such as the North American F-86 Sabre, the Lockheed T-33 T-Bird, or the Hawker Hunter. (A few Northrop T-38s and F-5s are in private hands, and they are worth perhaps twice as much as the best L-39s, but these are cranky and demanding exotics.) The popularity of the L-39 made it ideal for collectors: When we needed parts, they were a phone call away. With 3,000 Albatroses operating everywhere from Cuba to Bangladesh, there are still warehouses full of spares.

Here we were, refurbishing a plane that was once part of a military machine intended to bury us. Your average American might enjoy the irony of that, but he’s likely a bit surprised, post 9/11, to learn that warplanes are available to hobbyists. If you’ve got the jack, you can fly a MiG.

Of course, operating a jet is not a hobby to take lightly. For the past 15 years, the jet warbird accident rate has remained at roughly two to three fatal crashes a year, four to six deaths. With a fleet of only 500 to 550 such airplanes flying in the United States, that’s a not-inconsequential rate of attrition. Flying a jet warbird probably approaches Formula 1 racing on the danger scale- and Formula 1 racing is done on a track, and generally not by hobbyists.

Instructor and airshow pilot Larry Salganek of Santa Fe, New Mexico, has a fleet of five jet warbirds-one L-39, an L-29, a Fouga Magister, a Lockheed T-33, and a MiG-15-that he uses to train aspiring pilots. Cautious Carl Ludwig is one of the pilots smart enough to have paid Salganek a considerable sum to make him jet-capable. Salganek says it takes a good private pilot 8 to 10 hours of flight time, plus at least that much ground schooling, to become proficient in a simple, relatively forgiving L-39-training that typically costs from $13,000 to $16,000.

Not everyone has the money, or bothers to spend it. For someone wanting cheaper thrills, aging, obscure jet trainers and stone-age fighters-Spanish CASA Saetas, Yugoslav Soko Galebs, British de Havilland Vampires-are available for less than the cost of a used Cessna 172. “We just sold an L-29 (the L-39’s ungainly predecessor) for $45,000,” Salganek says, “and I had a guy call me the other day with a British Jet Provost for sale for $35,000.” The punters who buy these bargains sometimes don’t have the funds or inclination for proper training and maintenance.

Even in a beauty like the L-39, mistakes cost. Within less than three weeks last year, two L-39s crashed, killing four people, including The Wall Street Journal’s aerospace reporter. One accident was the result of low-altitude aerobatics, perhaps to wow the young woman in the back seat. (Pilots cruelly joke that the last words on such flights are usually, “Watch this!”) The other seems to have been precipitated by an unlocked-canopy warning that should have been a routinely handled problem but somehow turned into an out-of-control airplane.

Flying a military jet is “not a skill thing,” Salganek avers, “it’s a head thing. It’s planning ahead, making the right decisions. Jets are very easy to operate, but the penalty for making a mistake is way higher.”

Knowing Carl, and knowing his plane intimately, I am comfortable flying with him-and there are a lot of other warbird enthusiasts I prefer to watch from the ground. A few months ago we coasted back down the Hudson River Valley after a quick dash to Vermont to check out the snow cover on the ski slopes. Boston Center called us out to an Air France Airbus that was inbound to Newark-a couple of miles to our right-as “traffic 10 o’clock, goin’ by you, he’s indicating about 2,000 feet higher . . .” To the Frenchmen in the cockpit, a two-seat private jet in blue-and-gray camo must have looked as baffling as a Grandma Moses painting in the Louvre. For those who don’t fly, the skies are more interesting than you’ll ever know.