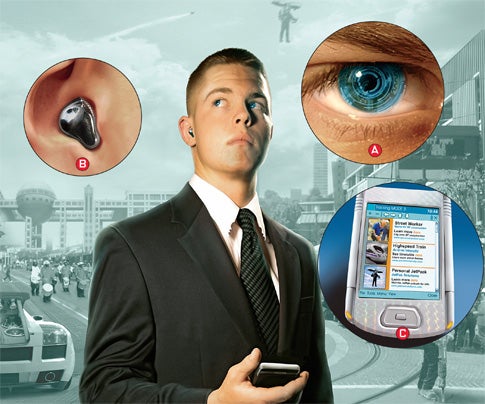 Upgrading our memory is a matter of improving our recording and retrieving abilities. At the current pace of miniaturization, camera components could be made tiny enough to fit in a contact lens (A) in just a few years. A high-precision microphone could fit in your ear (B). And the data could be downloaded to a searchable handheld gadget (C)

Humans naturally have the power to remember almost two bits of information per second, or a few hundred megabytes over a lifetime. Compared with a DVD movie, which holds up to 17 gigabytes, that´s nothing. Worse, you might easily recall the 40-year-old dialogue from Hogan´s Heroes yet forget your mom´s birthday. Or memorize reams of sports stats while spacing out on work you completed just last week.

It´s a problem that´s been bothering Gordon Bell for almost as long as he can remember. In 1998 Bell, a senior researcher at Microsoft, began digitally capturing his entire life for a project he calls MyLifeBits. First, he scanned his old photographs, research documents and notes. He began recording his meetings and phone calls and cataloguing his new photos and movies he saw. Every e-mail exchange he had was digitally archived, and he started using the company´s prototype SenseCam, which he wears around his neck, to automatically snap photos throughout the day.

Bell now documents about one gigabyte of information every month, all of which is stored in a searchable database on his PC. His is a highly manual process, but he expects that
in as few as 15 years it will be common to carry nearly all our â€memoriesâ€ around with us in a single device that will automatically record the sound and video of our daily activities, creating an inventory of the conversations we have, the faces we see and the articles we read. That data would be tied to communications that are already tracked electronically, like e-mail and event calendars, as well as TV shows, movies and other media we take in. The end result: on-demand total recall.

The biggest challenge to Bell´s vision is developing the software required to search your memory database effectively. So far, MyLifeBits pulls together more than 20 data types to link various memories to one another. Using a full-text search, Bell tracks down what he´s looking for in no more than 30 seconds. Soon, when searching through meeting notes, for instance, photos of people attending those meetings and their contact information will appear side by side. The effort could be pushed along by Columbia University researchers who are using statistical-analysis programs to automatically sort hours of recorded audio by time and location (office, caf, etcetera). Next, they´ll tackle speaker recognition, which would allow for categorizing and searching conversation by who´s talking.

Meanwhile, miniaturization and the falling cost of image sensors and data storage will soon allow for unobtrusive recording, as well as on-person storage, of several terabytes-which means a vast upgrade in personal processing power. â€Having a surrogate memory creates a freeing and secure feeling,â€ Bell says of his self-experiment. â€It´s similar to having an assistant with perfect memory.”

_Hear our contributing troubadour Jonathan Coulton talk MyLifeBits with Gordon Bell on the PopSci _Podcast from the Moon.