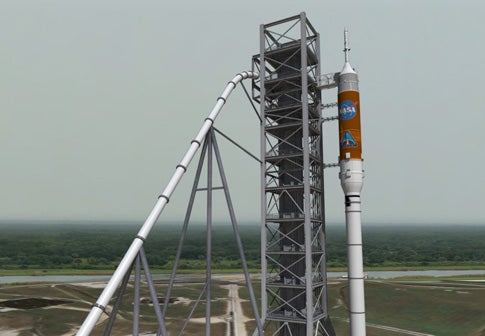 The giant slide tube, a take on a water slide, is a metal or fiberglass cylinder connected to the launcher’s access arm. The ride might sound like fun, but it’s not speedy enough for an emergency escape.

For more on NASA’s Emergency Egress System, check out this week’s episode of the PopSci Podcast

If something goes wrong in the tense moments before a space launch, such as an explosion of noxious gases or a fire on the launchpad, future astronauts could escape harm-on a roller coaster. Chris Bergin, editor
of the independent Web site NASASpaceFlight.com, recently unearthed a confidential NASA study of emergency egress systems (EES) in which the authors recommended using mini railcars, docked at the top of a 350-foot-tall launch tower, to speed crews down a track to ground level in a heart-pumping 4.5 seconds.

If you´re imagining astronauts screaming â€Whee!â€ inside their helmets with their gloved hands in the air, you´re not far off: Roller-coaster engineers served as consultants on the design, Bergin says. Other escape plans under consideration include a faster version of the current EES for space-shuttle flights-baskets suspended from cables, which astronauts have, thankfully, never had to use-as well as a high-speed elevator and a â€slide tube.â€

At press time, NASA wouldn´t specify a front-runner, but Kennedy Space Center´s Bruce Buckingham says a new EES will be in place for the launch of the shuttle´s successor, Orion, as early as 2012. That leaves plenty of time for practice runs at Six Flags.

STEP 1: Hop in and Buckle Up

At the first sign of danger, astronauts dash from the crew vehicle across the top of the launch tower and buckle into an enclosed four-seat mini car. Up to four cabs would be lined up on the track to accommodate other escaping launch and rescue personnel.

A crew member inside unlocks the unpowered coaster from its safety catch, sending the car down a tubular track to the base of the tower. As with many modern amusement-park steel rocket â€screamers,â€ gravity keeps the coaster wheels locked to the track, and the enclosure protects astronauts from smoke, toxic leaks and flying debris.

STEP 3: Hold Onto Your Lunch

Traveling at a
gravity-induced
100 mph, the cab rolls about 1,200 feet along a ground track to a safe area or bunker located inside the launch zone. A passive magnetic and friction braking system similar to those used on amusement-park rides decelerates the cabs. Total time from launchpad to bunker: about 88 seconds.

The evacuated crew exit the roller-coaster car into the safety of a covered and ventilated area, which can hold 21 people in sealed comfort for up to an hour until the danger has passed.

Other Creative Ways to Escape Disaster: