Racing technology, now and in the future 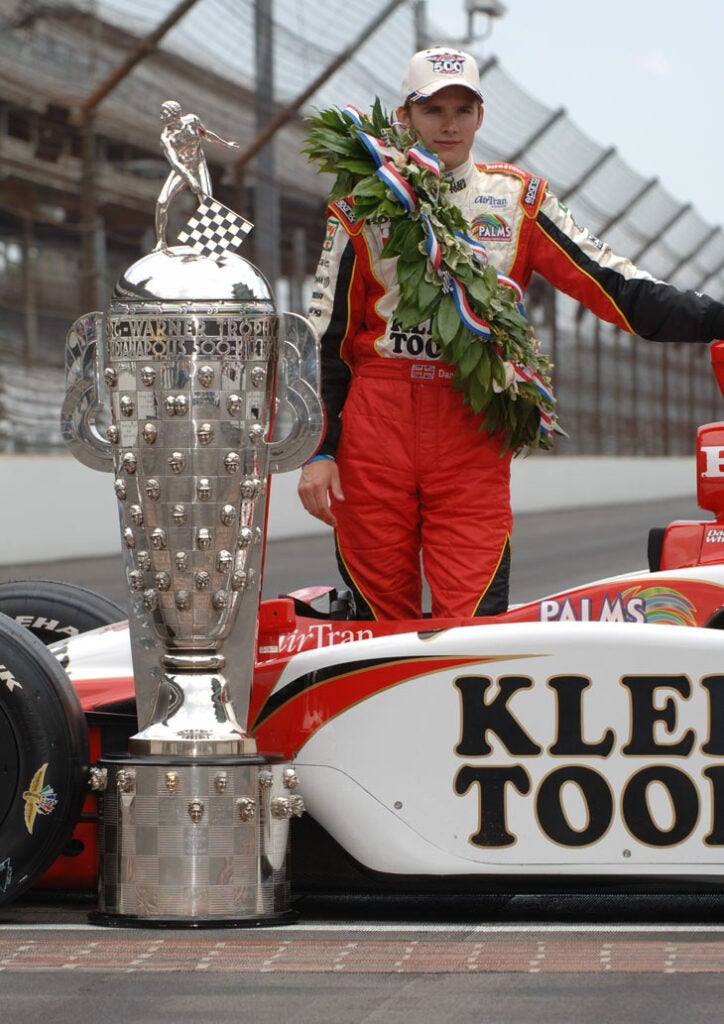 Popular Science magazine sat down with Indy Racing League driver Dan Wheldon three days after his May 29th triumph in the 2005 Indianapolis 500. The 26-year-old British driver for the Andretti-Green Racing team discussed his experiences on the track, the role of technology in auto racing, and the future of the sport

PopSci: Obviously, you won the 500, but how do you feel your team did, and you did as a driver during preparations and the actual race?

Wheldon: The month of May is very enjoyable, but you can get very frustrated. This month was probably the most mentally tiring I’ve ever had in my life. We started off the first day as the quickest in the field. We finished the month well also. But some days in between, for whatever reason, the car was just not as quick. It wasn’t a mile an hour, it wasn’t two, it was three or four. It made it very frustrating and very hard to develop the car, because you weren’t sure if the problem was with the car or that the track conditions had changed or something like that. On the whole, the month was very, very competitive, more competitive than even people thought–and people never underestimate the 500. We worked every minute to just try to improve the performance. In the race, we’d been running in traffic a lot. It was very difficult to pass because it was so tight. With better drivers now, they don’t make mistakes as often. So it’s difficult to capitalize on anything when they’re not doing anything wrong. But eventually we just worked our way forward. We improved the car at every single stop. With 30 laps to go, I’m sitting in the lead, with Danica [Patrick] pushing me pretty hard. We kind of went back and forth, but it was one of those races where my car was not bad to start with, but it wasn’t great. The changes we made not only made the car quicker and better and more comfortable through traffic, but when I got into the lead I was also able to stay in the lead. It’s tough to get that combination because normally if you want to be good in traffic, you have to have a ton of down-force. But if you have a ton of down-force, you’re slow when you’re out front and on your own. We managed to maximize exactly what we had.

PopSci: What are some of the changes you are able to make on the fly?

Wheldon: Tire pressure, front wing †some people tape a gurney on the rear wing for the 500 and then rip it off near the end of the race [to reduce the down-force], because what you try and do is position yourself at the front for the end of the race. Unfortunately, my teammates, Dario [Franchitti] and Tony [Kanaan] ran up front all day, but they dropped back in the pack, and because they hadn’t been there, they weren’t able to work on their cars so much. When they got in traffic, their cars were difficult. Also, your car can disturb the airflow to the car behind you. Danica didn’t disturb mine quite as much as she wishes she did now. Say we go through a corner–if she’s sitting right on the bottom, I have no other choice than to go up top. But she gave me a little bit of room, and that’s why I was able to follow her so close, because I had some air on my left front wing. That’s why I could get by her quicker than most. I think her car was pretty neutral, pretty loose, so she couldn’t get it way down, and that just enabled me to have some air on the front wing and then shhheeewww.

PopSci: Do you have any favorite moments from the race? Any particular moves or sequences of events that you are particularly proud of?

Wheldon: The chase and release in the final turn, that’s something I think I’ll always remember. There was a point where Danica and Bryan [Herta] stayed out on track and everybody else pitted, and I was about fifth in line. There was Vitor Meira in front of me, Ryan Briscoe, then Bryan and Danica. That sequence of laps where I was able to get by Vitor, get by Briscoe, by Bryan and then Danica was pretty special. It was sheer determination, because there were points in the race when you follow somebody close and you do pick up the understeer that’s around the speedway. The car just takes off funny on the exit of the corner, and you find yourself lifting a little bit off the gas. But it was one of them when I wasn’t lifting, so I was either going to win the race or go out trying. That sequence on the outside–I definitely got really close to the wall, so close where I had to move my leg in, for fear of hitting the fence and banging it.

PopSci: How about your strategy. What was the plan going in?

Wheldon: Starting in the middle of the pack, there’s obviously a lot of dirty air to start with, so the aim was to move to the front as quick as possible. It took me longer than expected just because of the dirty air and how competitive the field was, but we wanted to be around the top five by lap 150 and then really try and save some fuel so we could do a short last stop. It pretty much went according to plan. You have an overall plan, but then you’ve got to adjust to when the yellows come out, how long those yellows are for, and stuff like that.

PopSci: Were there any surprises with the car or the field?
Wheldon: The race pace was very fast. I don’t think people thought it would be as fast as it was. In testing leading into the race, I think people thought the race pace would be around 220-mile-an-hour average a lap or maximum 222. I remember seeing on my dash a lot of laps 225-mile-an-hour-plus. The race pace definitely picked up, and that changed people’s approach somewhat. They were perhaps more aggressive on changes to their car so that they could be quick and be comfortable in traffic.

PopSci: Does the field’s pace have to do with track conditions getting a little bit better? How does the pace change happen with the entire field?

Wheldon: It could be the weather conditions that could make the race pace faster, how the field is situated; if we’re all bunched up or all spread out, that can really have an effect too. There are certainly people out there that gear for one thing, or gear up thinking, â€Hey, it’s going to be 215 tonight,â€ and then all of a sudden it’s 220. Then you find yourself just working–not harder, but pushing the envelope more so you can do that. But weather is a very critical part of Indianapolis Motor Speedway. You wouldn’t think a temperature change here or there would make much of a difference, but it really does. Even a shade over part of the track would make a difference.

PopSci: How interested are you in the technology surrounding the cars themselves? Are you mostly into the racing, or do you have a deep interest in the tech that’s pushing you along?

Wheldon: I know a lot about the technology, but I choose not to really get involved as far as telling the team what changes to make. I will just relay to my engineers exactly what I’m feeling from the car, and I might relate that to a change they’ve made in the past. Now, Dario does the opposite. He can say what he wants, how many clicks he wants, how many degrees he wants. You have to have an understanding of the technology in order for it to help you, particularly when you’re working with Honda on launch-control stuff and the traction control. You need to understand what it’s doing, when it’s doing it and how you can improve on, for example, the traction control. How much you need it to intervene, when you need to intervene, how harsh it should be coming in, etcetera.

PopSci: What do you think of the driver aids that are starting to creep into all these cars: semi-automatics, traction control?

Wheldon: That’s the direction that racing’s going. It’s technology, and a lot of the engine manufacturers involved use the technology from their race programs to make their road cars better. If you’re going to see it on road cars, then it’s a good idea that they fine-tune it on a race car. If we had every driver aid in the book and every guy or every girl was allowed the same thing, I bet the same people would still be at the front. I don’t think it would make a difference from that standpoint, and I don’t necessarily think it makes a car any easier or harder to drive; it’s just the way it is. If it was easy, no one would put it in a wall, because traction control would just kick in and you’d be good to go, but obviously you can’t rely on that totally.

PopSci: What are some of the main differences among the teams in the way they’re set up and the technology they’re using?

Wheldon: From an engineering standpoint, there’s a lot that’s very different. For example, the Rahal team’s cars are very quick on their own, but they’re not quite as good in traffic. That’s because they certainly go down a set-up path in one direction, and we perhaps go in another. But as far as differences, it’s very hard to say from team to team, because no one knows. From driver to driver, Dario and Brian prefer a car that’s a bit more understeery while not quite as pointy as Tony and I do. Tony and I really like something that reacts very quickly, and that might be a spring difference. It could be a down-force difference, it could a distribution of the central pressure. There’s a lot of different things it could be.

PopSci: Moving on to the future of the sport, is there any technology that you either suspect is coming or would like to see come?

Wheldon: I think we’re going to start going to the semi-automatic transmissions. It seems to be that’s happening a lot in Europe, and also it’s happening in Formula One. From a safety standpoint it could be better, because you could keep two hands on the steering wheel at once. There might be a standard engine-management-system box that each engine manufacturer can fine-tune and put in information to make each engine do individual things. You’ll perhaps just get one box that’s supplied for each engine manufacturer, and they will have to use the same. I also see this championship getting to have more races. I don’t know if this would happen, but a race here would be fantastic–a street race. Certainly in New York, the people are more enamored toward the Indy car race. They like the glamour, they like the glitz. We had our first [street race] this year in St. Petersburg, Florida, and it was a huge success. It was probably the best street race in America for a long, long time. Actually, our team got a one-two-three-four finish there, so it’s pretty special to us.

PopSci: What kind of cars do you drive off the track?

Wheldon: The Ferrari F430. My teammate has a 360 Stradale–it’s absolutely beautiful. Oh, the Enzo’s nice too, but that’s a little bit out of my price range right now.

Wheldon: Ayrton Senna. I thought he was supremely talented and dedicated, and you could see that passion. Even when you listened to him, you could feel that from him, and some of his beliefs I felt very strongly about.