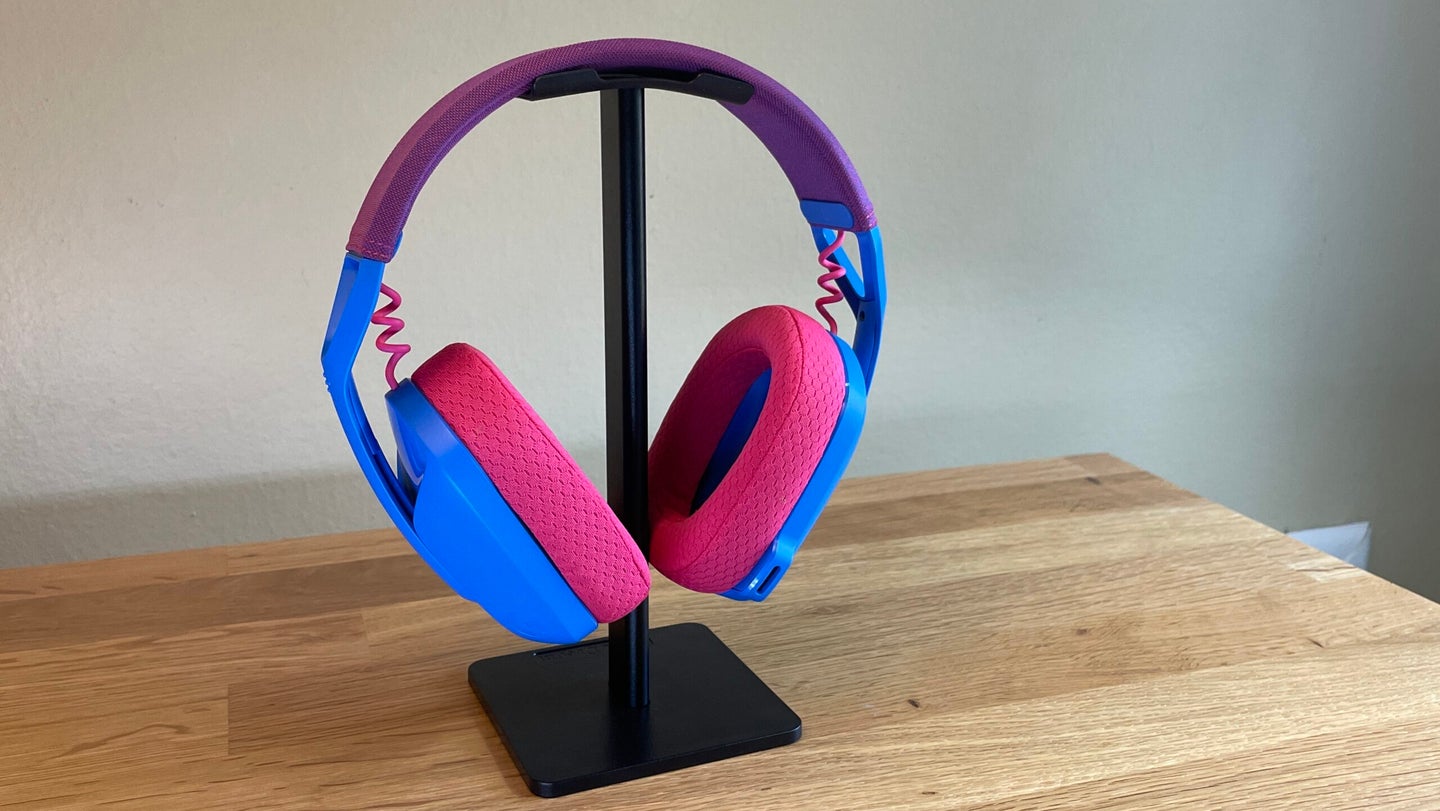 A great gaming headset needs to do more than simply sound good. Yes, you want every moment of your favorite games to come through clear with nuanced detail. But, you also want to be able to wear your cans all day without feeling like your head got too heavy for your neck. And it’s nice to have a wireless headset with long battery life. And what about something that looks good, so you can wear it on stream or in a Zoom call? Logitech’s newest wireless gaming headset, the Logitech G435, gets the basics right—it delivers solid sound—but pushes the envelope in other places. At 5.78 ounces, it’s among the lightest headsets I’ve ever tested. Its battery lasts almost as long as the best wireless gaming headsets. It’s colorful and stylish. Oh, and it’s pretty cheap, too. All of these things coalesce into a very impressive budget wireless headset.

It doesn’t have to be all about sound

Every aspect of the Logitech G435 keeps it casual. It’s plastic frame bends, though not flimsily. The top band is covered in fabric, but has no padding: The headset’s so light, it doesn’t need any. Instead of traditional forks, the cans connect on sliding bars of plastic that seem to slide into place without the need to adjust them to fit your head. There’s no boom mic extending from the headphones in front of your face, so you never have to adjust anything to get the best possible sound. And, most obviously, it’s strikingly colorful. No amount of RGB lighting can ever approach the flair of simply wearing a blue and pink headset. (It also comes in off-white and lavender, or black and yellow).

From a technical perspective, the Logitech G435’s light frame is its signature feature. Again, it weighs just 164 grams (or 5.78 ounces). Judging the weight of a headset can feel a bit like splitting hairs: The G435’s 164 grams feels impossibly light, but the 13.4 ounces of the HyperX Cloud Revolver is heavy enough to weigh you down after a couple of hours. But while the numbers seem arbitrary, a lower weight makes a big difference. Most of my favorite headsets are pretty heavy: They need lots of padding, enough clamp force to grab your head and hold in place and, often, a suspended or “floating” headband to distribute the weight.

The G435, shockingly, needs none of these things. The top of the headset doesn’t have any memory foam cushioning to soften the pressure on the top of your head. But, oddly, it doesn’t seem to need any. Even without any clamping, the headset holds in place on your head with only the slightest amount of pressure. The mesh-covered memory foam ear cup pads are a little too small to let you forget that you’re wearing a headset, but you can wear them for a full day without feeling any fatigue.

You could make the lightest, most comfortable headset design ever, but it would still be garbage if the headphones sounded bad. The 40mm drivers in the G435 push a sound that I’d describe as balanced, if somewhat flat. The mix is only slightly bass-forward (most gaming headsets pack in a lot of bass to emphasize explosions and the crack of gunfire), which lets the mids take charge when they need to, and the clean highs sing.

I wouldn’t describe the sound as great, though, either. The bass lacks the “punch” of a more powerful, bass-heavy speaker. I also, on a few occasions, noticed that some sounds could bleed into each other during complex songs like Dua Lipa’s “Love Again,” or busy moments in games like a crowded room full of guns firing and grenades exploding in “Call of Duty: Black Ops Cold War.”

Again, the Logitech G435 is casual in just about every way, so if you’re serious about sound, you will want to invest more. That said, the G435 sounds about as clean as any sub-$100 headset I’ve ever used. They deliver beyond any reasonable expectation of a budget wireless headset.

What about the buttons on the Logitech G435, though?

The one place where Logitech G435 is surprisingly not chill is its onboard inputs. The headset has only four plastic buttons on the back of the left ear cup: A power button, a two-part volume rocker and a mic mute button. There’s also a USB-C charging port. (It’s just for charging, though. The G435 doesn’t support a wired connection, which is a shame).

Those four buttons handle far more than four inputs, though, which can make the controls hard to grasp. Virtually every long-press and combination of presses does something, often an important something. Holding power and mute triggers Bluetooth pairing. Holding volume down and mute trigger low-decibel mode, which caps the volume at 85dB to minimize hearing damage if you’re playing and/or listening for many hours.

Every headset requires a little getting used to, but the G435’s is particularly frustrating because it includes core features, like pairing. It also doesn’t help that the headset doesn’t come with a reference guide, just a QR code linking to a digital manual.

Double the wireless, double the fun

It has downsides, though: It drains the battery more quickly, and can only pair with devices that have a spare USB port. The Logitech G435 gets an estimated 18 hours of battery life, which is very good for a budget headset, but it probably won’t last that long in 2.4GHz mode. Having Bluetooth opens the door to pairing with your phone and using the G435 as a pair of everyday headphones: Normally, that’s not something I look for in a headset, but given its light weight and relatively contained look, you might consider wearing these around the house or even on a commute.

I’d still recommend using 2.4 GHz whenever possible for gaming, though. Bluetooth, even the “gaming grade” version, introduces just enough audio lag to make you uncomfortable, particularly when playing rhythm games, or using a game streaming platform like Google Stadia or Xbox Game Pass. While playing Call of Duty: Black Ops Cold War on PC with a Bluetooth connection, the audio would occasionally drop out or stutter, which never happened while using a 2.4 GHz connection.

Two mics are almost as good as one

Opting for a pair of built-in microphones over an adjustable boom mic is usually a huge red flag on a gaming headset. Even when using a dual-mic active noise cancelling setup, as many of the best Bluetooth headphones do, a lot more ambient noise gets through than when you use a dedicated boom microphone that you can position right in your face.

The Logitech G435 seems to be an exception to that rule, though. Like other active noise-cancelling microphone setups, the headset actually uses two beamforming microphones. One microphone detects the sound right in front of your lips. The other detects noise coming from other directions. The headset is able to digitally cross-reference the sounds on both mics and filter out a lot of the ambient noise. The G435 isn’t the first headset to use a beamforming mic array for active noise cancelling, but I noticed the shortcomings of the inset microphone less than on other headsets. I would still prefer an adjustable boom, but the Logitech G435’s hardware exceeded my expectations.

Who should buy the Logitech G435 wireless gaming headset?

In fact, just about every facet of the Logitech G435 wireless gaming headset exceeded my expectations. If you wear a headset or headphones to wear all day, and want to avoid spending too much, it’s a $79.99 headset that punches well above its literal and figurative weight. Does it have top-of-the-line sound or the best microphone? No, but the sound quality is good enough across the board to serve most casual players and listeners. More importantly, it is extremely lightweight, which makes putting them on and leaving them on pretty less of an imposition than most headphones.

There aren’t a lot of sub-$100 wireless headsets that I’d recommend. I realize that’s a narrow set of parameters, but the G435 gets to hold court in that small kingdom.