Apple iPad Pro 12.9-inch review: The screen will spoil you

The new iPad Pro 12.9 has the M1 chip inside, but the beautiful mini LED display steals the show. 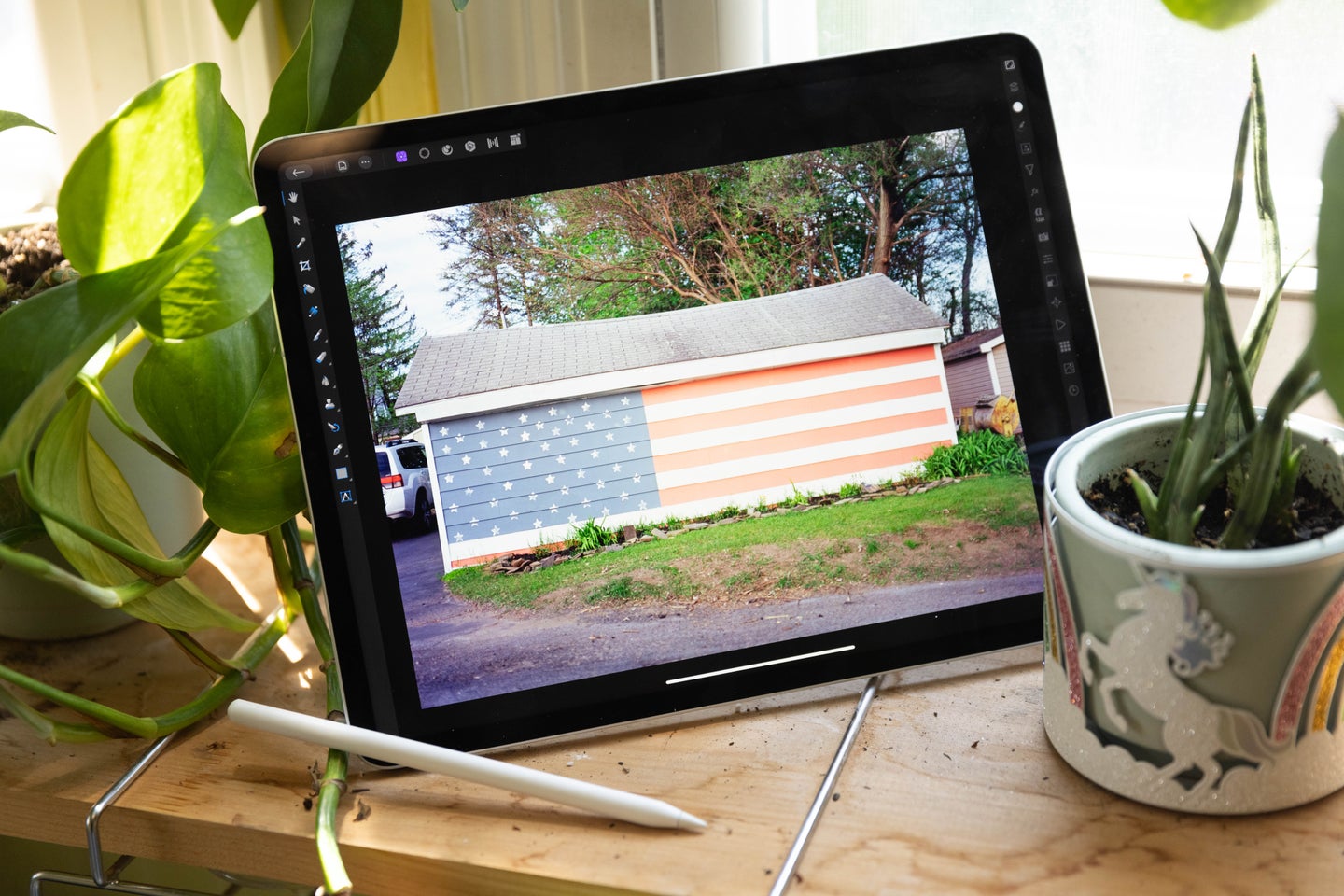 Even before its most recent update, the 12.9-inch iPad Pro felt like a flex. Take the biggest iPad out in public and there was a good chance it would be the prettiest display in the room, even compared to high-end laptops. The new iPad Pro, which Apple announced earlier this month, raises the bar even higher when it comes to beautiful screens.

At the same time, this is also the first generation of iPad to include Apple’s new M1 chip. While the M1 seems like a fairly natural evolution from the A12Z Bionic that came before it, the iPad Pro (2021) is now working with the same hardware found in the new MacBooks, Mac Mini, and iMacs.

Combined with a few other smart upgrades, the new iPad Pro’s feature set makes it decidedly more useful for creating content and a lot more enjoyable when consuming it.

While we would typically start an iPad Pro review talking about performance, the new screen is the biggest story here. For the 12.9-inch version, Apple has introduced a new 2,732 x 2,048 mini LED backlighting system, which crams roughly 10,000 tiny lights behind the display. It’s an increasingly common feature found in high-end TVs, and it helps make the new iPad decidedly brighter than the previous model.

To quantify that claim a little bit, the new iPad tops out at 1,000 nits (a measure of brightness) across the entire screen, which matches the $4,000 Pro Display XDR that debuted with the most recent Mac Pro. Some areas of the iPad’s screen can reach 1,600 nits, which is likely too bright for your sensitive eyeballs in some lighting situations. As a comparison, consider that the previous iPad Pro display topped out 600 nits. So, yeah, the new iPad Pro is bright.

That extra illumination comes in very handy when you’re working (or watching content) in bright areas. The extra brightness is particularly noticeable when watching HDR content.

My color calibration gear doesn’t work natively with the iPad, so I couldn’t do a formal color measurement. Sitting next to my calibrated IPS monitor, however, the colors looked close enough that I’d feel comfortable editing images for work on it without worrying about a color shift.

Beyond all of the technical stuff, the screen is simply beautiful. The anti-glare coating works excellently, even in direct light. The colors are poppy, but accurate. It’s truly impressive to look at.

The M1 chip comes to the iPad Pro

If you’ve been following Apple news in the past year, you’re probably sick of hearing about the M1 chip. This piece of hardware has shown up in every new Mac computer and tablet since the company broke off its relationship with Intel last year. While the M1 was a big departure for laptops and desktops, it’s a more natural evolution for the iPad Pro, which was already using Apple Silicon.

Apple claims the M1 offers a 50-percent increase in CPU performance and a 40-percent bump in graphics processing when compared to the A12Z, which powered the previous model. Numbers like that can be hard to parse because they don’t have a direct relationship with real-world applications. Your videos aren’t going to render 40 percent faster based purely on GPU upgrades. There are many other factors at play.

Now that both the iPad Pro and the MacBooks are running the M1, however, it is slightly easier to compare them. Programs like Affinity Photo are M1-optimized and offer a much more similar experience across platforms.

I ran the new 12.9-inch iPad Pro through some basic Geekbench 5 tests and, unsurprisingly, it spit out similar results to the most recent iMac and MacBooks. It scored roughly 1700 in the single-core test and around 7300 in the multi-core test. While those numbers give a handy baseline, they can’t account for real-world usage.

For testing in the wild, I imported a few hundred 45-megapixel Canon EOS R5 photos into Lightroom, it was predictably snappy. It quickly rendered full-resolution previews and allowed me to hurry through hundreds of images to find the keepers. I’d feel more than comfortable using the iPad Pro like this, even with a picky creative director looking over my shoulder.

That speed carries over to other creative apps as well. I edited some 4K video in LumaFusion (which is an excellent pro video editing app if you haven’t tried it). Once the footage was imported and in place, the software allowed me to move clips around and preview my composition without much hesitation.

Ultimately, the iPad Pro isn’t going to replace a burly Mac Pro sitting in a studio. It is, however, more than capable of handling serious workflow in the field.

A front-facing camera with Center Stage

Video chatting on the iPad has always been slightly awkward due to the camera’s position. It’s at the top when you’re holding it in portrait mode, but it sits to one side when the device is in a keyboard case. As a result, the other people in your call see you looking off at an angle. That hasn’t changed. However, Apple has added a new feature called Center Stage to the front-facing camera.

The cam can now track your face, even if you shift around. It doesn’t have to physically move in order to keep you in the frame, but rather it does the tracking digitally. It’s similar to a feature found in Facebook’s Portal device.

It’s clever and seems to work pretty well when I tried it, but I’m not the kind of person who moves around a lot during calls.

The USB-C connector on the bottom of the new iPad Pro is now Thunderbolt/USB 4 compatible, so you can plug in devices like external storage or cameras and transfer files much more quickly and reliably.

I easily transferred a whole grip of large digital image files into the iPad with the same speed I would dump them to a computer. This is another one of those upgrades that will be extremely useful to some people while others won’t even necessarily notice it.

The iPad Pro can now accept a 5G SIM card for faster connectivity. 5G’s utility, however, depends on your access to a fast network. I tried it. It worked. It was unexciting, but that’s what you want when it comes to a mobile connection.

If you’re stepping up from an older model iPad Pro, battery life won’t be much of a factor in your decision-making. Because the device itself is so large, it still manages to squeeze plenty of work time out of its built-in battery.

Lastly, the Magic Keyboard iPad Pro 12.9 case now comes in white. While it looks impressive, I can’t imagine ever buying one. Even trying to baby it during my week of usage, I still managed to get crud on it. If you can buy this thing and keep it clean, then you deserve to be in the next iPad commercial. And while the iPad Pro dimensions haven’t changed, you’ll want to buy the latest model Magic Keyboard case to get full functionality when compared to the older model.

For some dedicated creative types, the new iPad Pro will be the best iPad overall. The screen is a huge upgrade, it has noticeably more computing power, and the USB port makes dumping files to the Apple tablet much simpler. If you’re planning on using it heavily for work in the field, then the several hundred dollars it costs beyond the price of an iPad Air is justifiable. Deciding the battle between iPad Air vs. iPad Pro really comes down to your intended usage and budget.

If you’re looking for a gadget flex, then the iPad Pro is the best tablet around. It’s an undeniably beautiful piece of gear that I enjoyed using.

If you’re considering the iPad Pro 12.9- vs. 11-inch model, you’ll get a cheaper, perhaps more practical device, but you won’t enjoy the benefits of all the fancy new screen tech that makes the 12.9-inch model so appealing in the first place. The 11-inch version is great, but it doesn’t hit quite like the biggest iPad.

Before you take the leap, though, remember that the iPad price is only the beginning. A 12.9-inch iPad Pro with 512 GB storage retails for $1,399, which is already steep. Adding a Magic Keyboard case and an Apple Pencil (which you will definitely want) pushes the price tag all the way up to nearly $1,900. That’s the kind of price that’s much easier to handle when you have an expense account. It sure is beautiful, though.