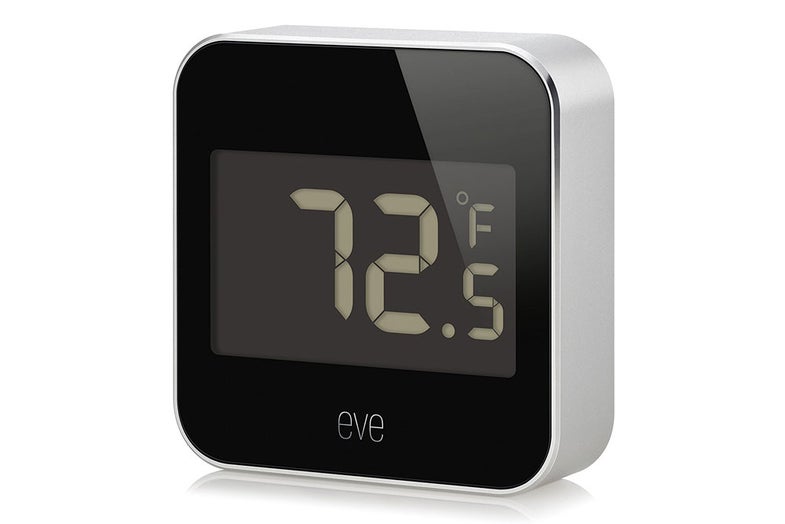 The Eve Degree lets you track temperature, humidity, and barometric pressure inside your home or out. And if you have other Apple HomeKit-compatible devices, you can use those readings to trigger specific smart home actions, like turning off the heat or turning on a humidifier.

As with most HomeKit devices, the Degree takes less than a minute to set up. The palm-sized sensor comes with its replaceable coin battery pre-installed and displays the temperature as soon as you press the sensor’s solitary rear button (pressing it again displays humidity). While you can use Apple’s Home or any other HomeKit-compatible app to set things up, Elgato’s Eve app lets you also specify your elevation for more accurate air pressure readings. After choosing to add a new device, you simply scan the HomeKit code on the bottom of the Degree, and it instantly connects to your HomeKit setup via Bluetooth low energy. No hubs or Wi-Fi required.

Because the Degree is IPX3 certified (rainproof, basically), we decided to use it both indoors and out. We tested it in our bedroom for a week and then mounted it outside on our back deck for another week. While we didn’t have a HomeKit-compatible thermostat on hand, we did hook up a standalone humidifier and fan to Eve’s Energy switch to see how well event triggering worked.

At 2.1 x 2.1 x 0.6 inches, the Degree is one of Elgato’s tiniest HomeKit-compatible sensors and an attractive alternative to the much chunkier Eve Weather—a device that does the same thing but is designed primarily for outdoor use. Unlike the latter, the Degree comes with an LCD screen that can be used to display either the temperature or humidity level. You can also mount the sensor to a wall thanks to a hole in the back.

While the Degree may look a lot different from the Eve Weather, they both provide you with essentially the same data. You get temperature and humidity information that you can access through Apple’s Home app, Elgato’s Eve app, or through Siri. That data can also trigger automation rules.

Setting those up is easy. Once inside the Eve app, you select Scenes and then Rules. A rule consists of at least one trigger (ex: humidity dips below 50 percent), and you can add additional conditions to that trigger if desired (ex: after 9pm) before the resulting ‘scene’ is initiated. We tested out a couple straightforward automations—one that turned on a fan plugged into the Eve Energy Switch when the temperature was above 80 degrees Fahrenheit, and another that turned on a humidifier in our room when the humidity dropped below 65 percent. Both worked flawlessly.

While you’re not forced to rely on it, the Eve app itself is refined and easy to use. It not only provides you with the ability to track temperature, humidity, and air pressure over time using attractive graphs, it also lets you organize that data by hour, day, week, or month. You can even export it all if so desired.

Still, as $70 sensor that really only integrates with HomeKit there were definitely some areas we felt the Degree fell short. For one thing, the screen is virtually unreadable in direct sunlight—or any kind of bright light. There’s no backlighting, either (presumably this would have sapped its battery life), which means it’s also unreadable in the dark. Neither of these details mean that much ultimately as you’ll usually be accessing the sensor’s data via an app. But if you’re going to go to the trouble of including a screen on a device, it’s a good idea to make it legible.

Elgato also made the curious decision to put the device’s one button on the back of the unit. Again, you’re usually accessing the sensor’s data via an app, but if you’re going to give people the option to switch readout measurements, it would nice not to have to unmount the Degree from the wall every time you want to do that.

Potential buyers will also have to contend with the usual HomeKit-related caveats. For one thing, you’ll need to own an Apple TV or an iPad if you want to use the Degree while away from home. And for some reason, Apple’s Home app doesn’t list the Eve Degree as a trigger despite the fact that you can set up other automations with it. Then there’s Bluetooth low energy. Our wireless home network is forever grateful to it for taking on some of the communication burden for HomeKit devices, but it can be quite slow to update depending on how far away you are from your HomeKit devices.

There are definitely cheaper ways to track temperature and humidity data in and around your home. But if you’re in a predominately Apple household and want a well-built, accurate sensor that integrates seamlessly with HomeKit, look no further than the Degree.