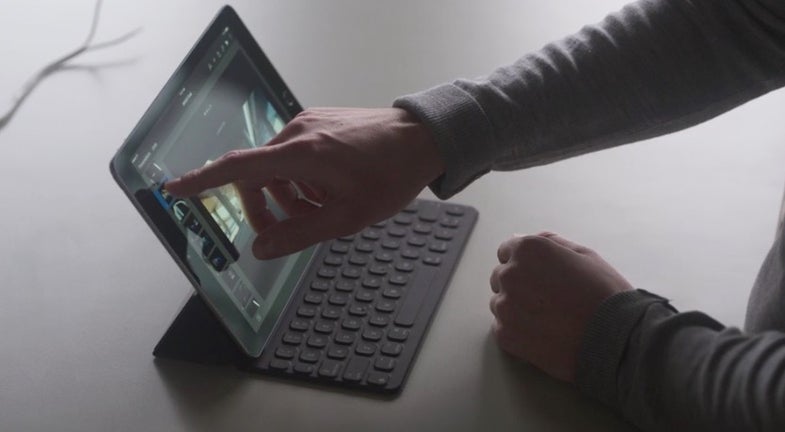 Apple has shrunk the size of its iPad Pro from 12.9 inches down to 9.7 inches to pull in customers who prefer the original iPad dimensions, but everything else on board is bigger, better, and more powerful.

The new 9.7-inch Retina display is the classic size most recently seen in iPad Air 2. It’s a large enough display to get your work done, but small enough to carry around wherever you go.

Apple knows 9.7 inches is the optimum size for a lot of customers. After all, they’ve sold over 200 million 9.7 inch iPads in total, and they expect this to be part of that community.

“They’ll all see that it is their ultimate upgrade,” said Phil Schiller, Apple’s senior vice president of marketing.

Apple pointed to a statistic that says there are currently 600 million PCs over 5 years old, suggesting it’s time for a replacement.

It has the same display technology–40 percent less reflective and 25 percent brighter than an iPad Air 2. Its color saturation is also 25 percent better, and works with night shift (though that may be counterintuitive for all the professional graphic designers out there).

Keeping designers in mind though, a new feature matches screen tone to environmental lighting. Two new four-channel ambient light sensors measure the light temperature of the environment, and matches the display images to the environment–wherever you go. That means warmer colors indoors and more blue light in the sun.

It puts out twice the audio volume as the Air 2, and the new A9X chip delivers about 500 gigaflops of power (a little more than an Xbox 360), and great rendering.

Apple says the new iPad Pro is ideal for photo and video work. It has a 5 megapixel front camera, 12mp in the back, 4K video, and Retina Flash.

Oh, and it supports Pencil, of course.