Apple to Announce iPad 3 on March 7th (With Bonus Rumors)

Apple just sent out invites to what, with our Holmesian deduction skills, we can safely say will be an event... 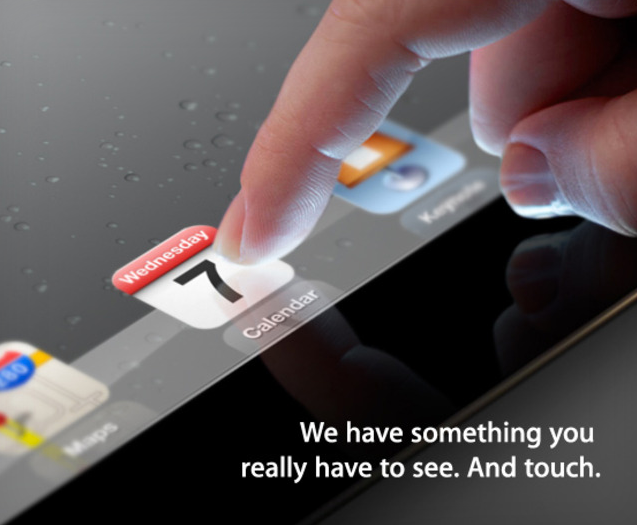 Apple just sent out invites to what, with our Holmesian deduction skills, we can safely say will be an event announcing the next iPad. It’ll be held on March 7th in Apple’s favorite announcement spot, the Yerba Buena Center for the Arts in San Francisco, and of course we will be breathlessly reporting the details of the gadget that will inspire us to throw our current iPads out of the 9th-floor windows of our office in disgust.

The rumor mill is already pretty well churning with the possibilities of the new tablet. Given the phrase on the invite, “We have something you really have to see,” most outlets are assuming the iPad will see a bump in screen resolution, which would be welcome. Our friends at Gizmodo performed an exhaustively detailed reenactment of the photo in the invite, analyzing the position of the raindrops and icon spacings (!), and deduced that it is likely that the screen resolution is higher. Even odder, they make a fairly convincing argument that Apple is eliminating the home button in place of some kind of touch button.

Other rumors: a faster A6 chip (the current iPad has an A5), possible 4G LTE antenna (the iPad has a big enough battery that it could cope with the strain of that network), improved cameras, and the addition of Siri. We’ll let you know how many of these come true on March 7th.