Backup storage in the form of an SD card is a nice touch. 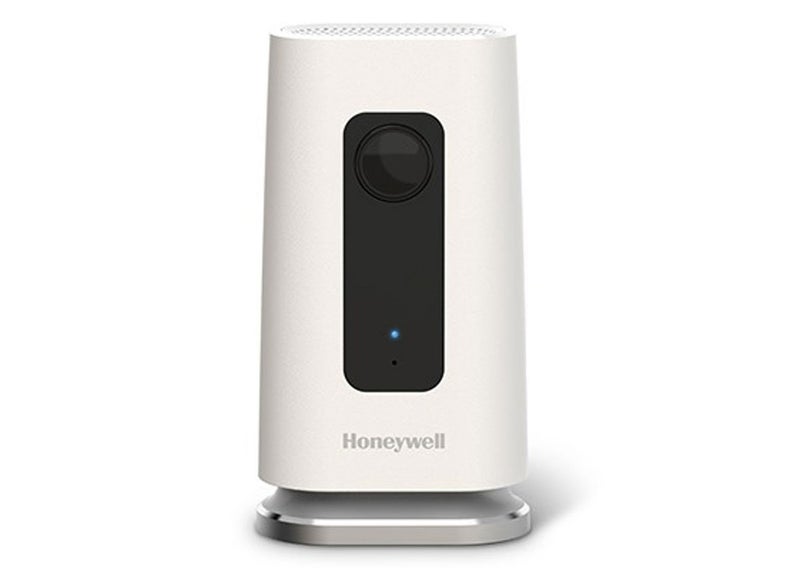 Like every other indoor security camera, the Lyric C1 helps you keep an eye on things while you’re away from home. In addition to sending alerts when it detects motion, the camera also offers intelligent audio monitoring and can let you know if your smoke alarm is going off. It will even continue recording video if your Wi-Fi goes down thanks to an 8GB SD card.

The C1 uses the same app as the rest of Honeywell’s Lyric family of smart home devices. After downloading and launching it, you select the C1 Wi-Fi Camera and create an account if you don’t have one already. Then you name the camera and its location, remove the magnetic base, plug the camera into a power outlet, and wait for the LED light to turn blue.

The app will connect to the camera via Bluetooth and display a QR code, which you scan with the camera lens. You’ll hear a beep if everything goes well, and after that, you simply choose the Wi-Fi network you want the C1 to connect to. You can use the C1 with its magnetic stand or mount it directly to a wall. We opted for former, placing it in the same living room spot we test all our indoor security cameras.

We used the C1 as our main indoor security camera for a week, testing its video and audio monitoring chops and comparing it to other security cameras we’ve recently reviewed.

Distinguishing yourself in the Wi-Fi security camera arena is becoming an increasingly difficult task these days. At one end of the spectrum, you have expensive powerhouses like new Nest IQ, which can learn and recognize specific faces, intelligently zoom in on detected motion, and perform a whole host of other sophisticated tricks. Then you have more traditional offerings like the new Logitech Circle 2 and Arlo Pro, both of which offer free cloud video storage, 1080p video recording, and, in the case of the Circle 2, the ability to be used indoors and out.

At $120, the new Lyric C1 falls in the more budget-friendly end of the spectrum, but it hasn’t been stripped of all appealing features. Unlike most Wi-Fi cams, the C1 comes with an 8GB SD card that it uses to store video when Wi-Fi is unavailable. It also has a useful audio alert feature that notifies you if a loud alarm (like from a smoke or carbon monoxide sensor) is going off in your home. Throw in a well-designed and reliable app for monitoring things and you have an undeniable bargain of a camera.

And yet there’s a reason the C1 costs around $80 less than most security cameras. The one area where it clearly falls behind the competition is the camera’s 720p resolution. Now, as we’ve noted before, the difference between 720p and 1080p isn’t necessarily all that evident with security cameras. A lot can depend on the settings you choose and your home’s available bandwidth, among other things. But where 720p resolution really does reveal its limitations is when you try to zoom in on things. The C1 offers 5x in-app zoom that’s pretty much useless. If you just want a camera to see if fido is on the couch, no big deal. If you want to use the C1 as a true security camera, well, that’s kind of problematic—at least if you want see who’s robbing you.

Still, despite its low-res video, both the camera and the Lyric app performed consistently well during our testing. Alerts were reliable and timely. Geofencing worked without a hitch, and the intelligent sound detection functioned perfectly when we purposefully set off our smoke alarm.

We’ve been complaining about the lack of alternative storage options in indoor security camera for a while now, so it’s nice to see the C1 implement an SD card, even if it is just as a backup. While not spectacular, it’s nice that the security camera also gives you 24 hours of free cloud storage as well.

The Lyric C1 is a flexible and affordable home security camera. But while it offers some unique and legitimately useful features, it still lags behind other cameras in its class when it comes to free cloud video storage and resolution.