How this one-wheeled skateboard lets riders cruise without crashing

We tried out the electric Onewheel Pint and did not fall down. 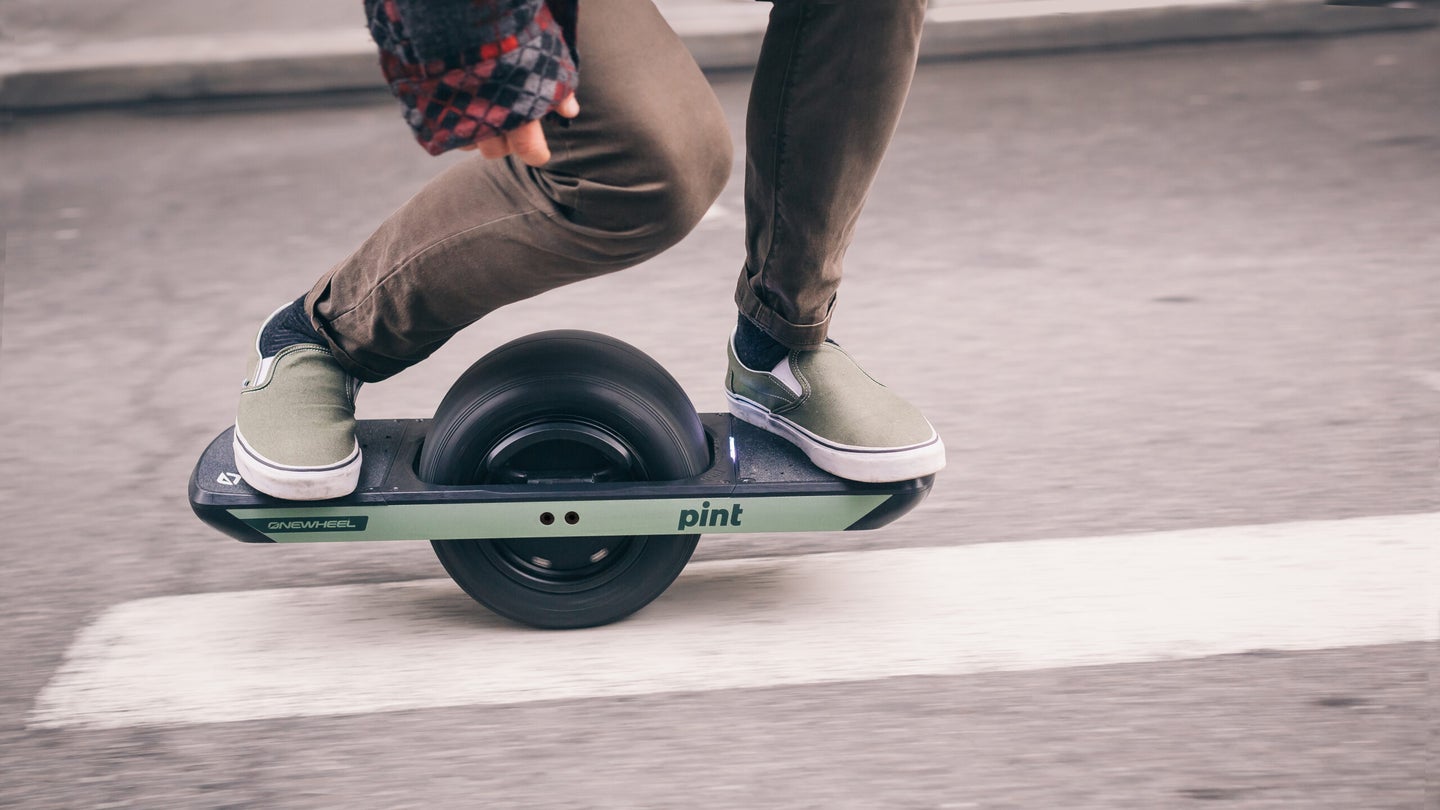 The Onewheel Pint looks different from most of the other electric people-movers out there: it’s an electric skateboard built around a single 6.5-inch-wide air-filled tire. If you’re used to seeing two-wheeled hoverboards, or four-wheeled skateboards, this craft appears to be unstable.

Trying one out recently, I was a little worried I’d bite it on a hard Manhattan sidewalk. The systems that keep the board balanced aren’t apparent when you look at it, after all, so getting on requires a small leap of faith. But save for one awkward and undignified dismount from this electric one-wheeled skateboard, I successfully navigated around pedestrians and experienced zero disasters while riding the Onewheel Pint on New York City’s crowded public walkways. It helped that Jack Mudd, the company’s “chief evangelist,” literally held my hand or otherwise physically guided me for most of the time that I was trying it out.

Onewheel has been making single-wheeled skateboards since 2014, but the Pint—the device I tried—is their newest, least-expensive, smallest, and lightest one yet. It has a top speed of 16 miles per hour and a range of 6 to 8 miles.

Inside the hub of the big, single wheel that constitutes the gadget’s entire propulsion system, is an electric motor. That motor performs two essential duties: it spins to propel you forward or backwards down the sidewalk, and it makes constant small adjustments to keep you balanced.

One foot goes behind the wheel, and the other goes in front of it. Under that back foot is the battery that gives the motor the juice it needs, and under the front foot is a microprocessor that makes the whole mini-transportation device work. Also under your front foot are two pressure-sensitive pads that detect when you’re standing on the board.

Three internal accelerometers and gyroscopes continuously measure the orientation of the board in space—its roll, pitch, and yaw. To picture what roll, pitch, and yaw are, imagine the way an airplane can roll side to side, its nose can pitch up and down, and it can turn itself to point in different compass directions; that will give you an idea of the different motions the Onewheel is monitoring.

The gyroscopes inside aren’t the kind that spin to help a machine stay oriented; instead, they’re chip-level sensors that measure rate of rotation. For example, the Apple Watch has an accelerometer and gyro on board to help it measure actions like your swim stroke. The sensors on the Onewheel Pint monitor what the board is doing 14,000 times per second in order to tell the motor what to do and help you balance or move.

Kyle Doerksen, the CEO of Future Motion, which makes the Onewheel devices, compares it to balancing a broom on your hand. “The broom wants to tip over one way, so you have to move your hand under it,” he says. Just like you shift your hand slightly to keep the broom in the air, the big wheel moves under you to keep you balanced.

A corresponding app lets you know how much charge the battery has and how and far you’ve cruised. It also lets you control other factors like how aggressively the board responds to your movements so you can tweak the performance to your specific riding style.

I found it to be wobbly at first, but it got smoother the more I rode it. Once you’re on it, the way to move forward is just to slightly lean that way. “Look where you want to go, and then you’re just going to shift your center of gravity a little bit in that direction, and you’re going to start going there,” Mudd told me before I started riding it.

In one of the brief moments that I rode it without also being in contact in Mudd, I said, “It’s a little bit scary, but not that scary.” In short: the thing works, but you have to learn it, and the more relaxed you are, the better.

The Onewheel Pint exists in a crowded field of electric gadgets designed to help whisk you down a bike lane or sidewalk. There are traditional “hoverboards” in which your feet are positioned side-by-side and you face squarely forward as you go; there are electric bikes that give you a boost as you pedal; there are electric scooters and a variety of Segway options, too.

At $950, the Onewheel Pint is much more expensive than a hoverboard (the Wirecutter’s recommendation is the $250 SwagTron T1). Even a two-wheeled Segway “transporter,” the Ninebot S, costs $489. Segway also makes a one-wheeled transport device, the Ninebot One S1. It’s $449 and it’s big, single tire is more like a bike wheel than the Onewheel’s thick, shorter tire.

The Pint may appeal to skateboarders or snowboards who love having one foot squarely in front of the other—although they could also consider four-wheeled electric skateboards, like one from Acton, which requires a remote control to run.

And while it’s one fun but expensive option for moving from place to place, it’s also representative of an exciting transportation trend in which the objects we ride—whether they’re cars, motorcycles, or even flying machines—are electric and sometimes have autonomous or assistive capabilities to help us get where we want to go. Onewheel, after all, is just one example.

This story was originally published on May 8, 2019.