Featuring all the basic connectivity you need, this streamlined 2x2 USB-C interface is one of the smallest we’ve tested. 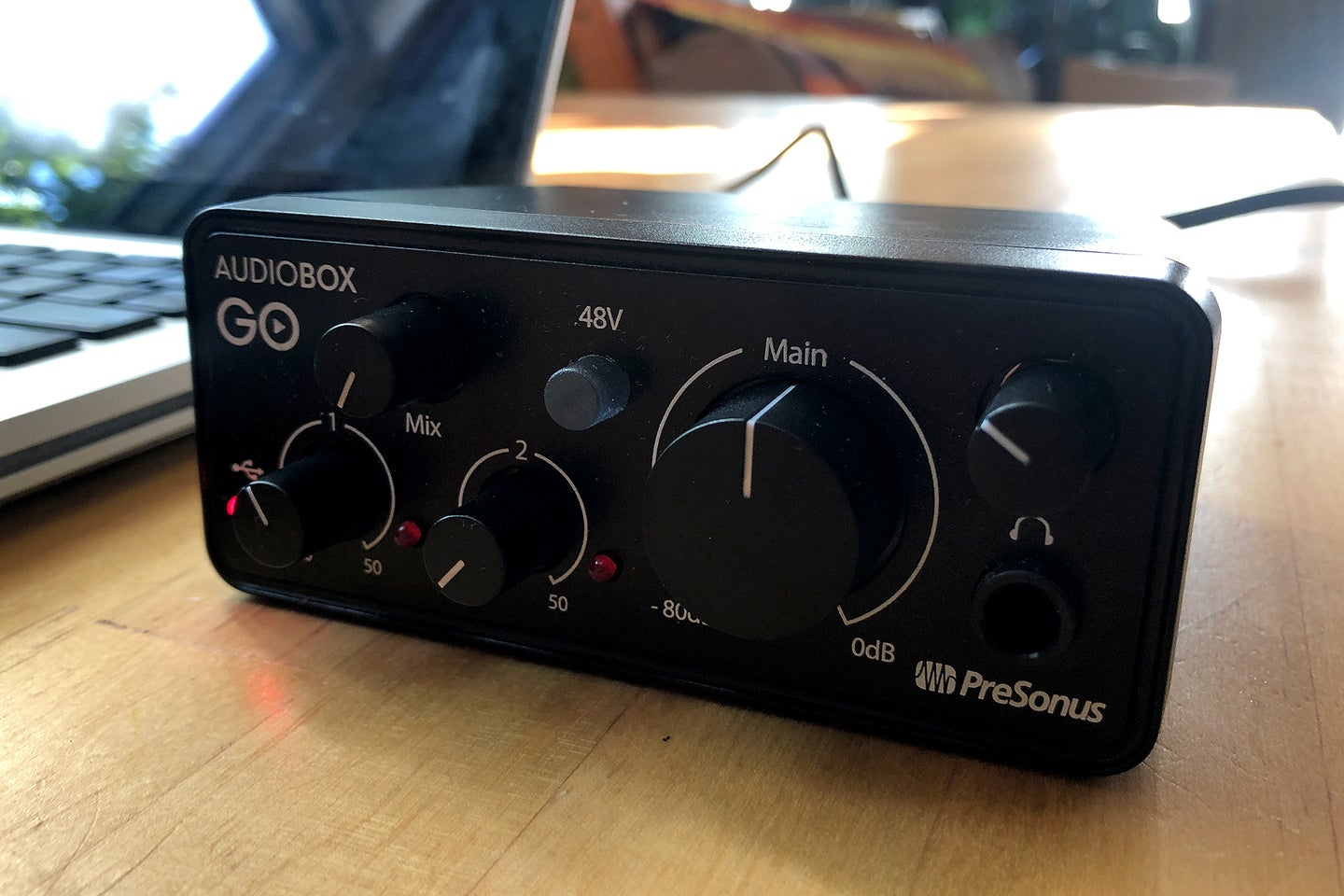 While recording audio on the go is becoming easier every day thanks to smartphones and other portable recording devices, the sound quality and flexibility of a dedicated audio interface are still hard to beat when you’re looking to create a polished product. Earlier this year, audio manufacturer PreSonus released the AudioBox GO—their smallest and lightest audio interface ever—with the aim of giving musicians, recordists, and mixing engineers access to high-resolution audio recording and monitoring anywhere. To keep it ultra-portable, the AudioBox GO has a very limited feature set and few connectivity options, making it best suited for streamers, musicians, and other content creators who don’t need to record more than a single microphone at a time. I recently had a chance to test the AudioBox GO at my home studio in a variety of monitoring and recording scenarios, and I was pleased with its overall sound quality and ease of use. Let’s dive in and explore whether the AudioBox GO is flexible enough for real-world recording scenarios.

The PreSonus AudioBox GO has a footprint of 4.25 inches by 3.3 inches and a height of 1.73 inches, and it weighs in at just over half a pound, or a little more than the average smartphone. The interface features two input channels and two output channels. Input one consists of a combination TRS/XLR jack that accepts line level signals from equipment like samplers and keyboards, as well as microphones. Input two is a TS instrument input that accepts direct signal from unbalanced and unamplified sources like electric guitars and electric basses. Its two output channels correspond to the left and right channels of its single stereo output, which can be accessed via two TRS outputs on the rear panel, as well as a front-mounted headphone output.

All of the AudioBox GO’s manual controls are mounted to its front panel for easy access and include two knobs to control the gain for inputs one and two, a main volume knob, a headphone volume knob, and a mix knob that allows users to adjust the mix between computer playback and live input audio. The 48-volt phantom power is also switchable via a button on the front panel, allowing users to send extra power to the XLR connector for compatibility with condenser mics and other phantom-powered gear (just don’t forget the XLR cables).

One of the most appealing elements of the AudioBox GO is its bus-powered design that allows it to operate via a single USB-C connection. This makes it a truly portable interface option that can be used alongside any computer, Android, or iOS device to record pretty much anywhere. Its internal XMAX-L mic preamp also offers 50 decibels of gain, which is plenty for powering condenser mics but slightly below the ideal specs for dynamic microphones like the Shure SM58—at least on paper.

Getting started with the PreSonus AudioBox GO

Thanks to its plug-and-play design, setting up the AudioBox GO is quick and straightforward. While the interface comes with a USB-C-to-USB-A cable for connection to laptops and computers, you’ll unfortunately need to bring your own USB-C-to-USB-C cable if you’ll be connecting an Android device or an Apple Lightning-to-USB Camera adapter for iOS devices. For my tests, I connected the AudioBox GO to my Core 2 Duo MacBook Pro via USB and opened my digital audio workstation of choice, Logic Pro X, where the interface was immediately visible and available for use in the software. I followed by connecting a Shure SM58 vocal microphone to the AudioBox GO’s combo input via XLR and connecting a pair of Sony MDR-7506 headphones to the interface’s headphone output (a classic pair for personal mixing/monitoring).

Right off the bat, the weight of the XLR cable pulled on the incredibly lightweight AudioBox GO, causing it to slip and slide around on the tabletop quite a bit. Fortunately, PreSonus includes a sheet of four adhesive rubber feet to attach to the bottom of the interface that should theoretically resolve this problem, but because I was using a demo model I left them off for my test. If you do end up picking up an AudioBox GO, this is definitely not a step to skip.

Despite being very compact, the AudioBox GO is capable of high-resolution 24-bit/96kHz analog-to-digital/digital-to-analog conversion, allowing users to record and monitor audio at industry-standard quality. I tested the AudioBox GO’s D/A conversion by first loading up an existing 24-bit/96kHz Logic session that I’m currently working on and directly comparing its playback quality to that of a Universal Audio Apollo x8, an interface that costs around 20 times more. While the AudioBox GO’s 0.004% harmonic distortion and 90 dB dynamic range fall well below the Apollo x8’s specs of 0.0002% and 112 dB, I found the difference between the two to be negligible in the context of general playback when compared through the same pair of Sony MDR-7506 headphones.

Following my playback test, I used the AudioBox GO to record a series of speech and singing tracks through a Shure SM58, a common vocal mic favored in studios and live sound applications for its clear and present midrange response. The AudioBox GO’s built-in XMAX-L preamp offered a surprisingly neutral and accurate sound free of the characteristic artificial “air” or high-end enhancement of some budget preamps.

The preamp’s 50dB of gain were more than enough to draw sufficient signal from the SM58 and, most importantly, I was also able to max out the gain of the mic preamp without introducing much white noise, which is an uncommon feat in the world of budget interfaces. To round out the recording test, I followed by plugging a Fender MB-98 Mustang Bass directly into input two of the AudioBox GO and recording a few fingerstyle and picked bass parts, all of which sounded just as expected: dynamic, full, and neutral.

Compared to the similarly priced Focusrite Scarlett Solo (3rd Gen.), which also features two inputs for microphones and instruments, the AudioBox GO offers about 10 dB less gain and doesn’t include a built-in high (“Air”) boost to enhance audio on the way in. In the world of digital audio, it’s easy to boost gain, edit EQ, and make other changes to audio via software after it’s been recorded, but this is a notable difference when comparing the preproduction tone captured by the two interfaces when working out of the box.

As promised, the mix knob on the AudioBox GO delivered latency-free monitoring of my input signal, which is a key feature that ensures consecutive performances line up properly with previously recorded material. This type of manual, knob-controlled signal blending may not be the most elegant system for balancing the mix of computer playback and live signal compared with the native latency-free monitoring offered in higher-tier devices like the Universal Audio Apollo x8, but it is very intuitive to use and adds to the unfussy, streamlined appeal of the AudioBox GO.

While I didn’t have an opportunity to install and test it, the AudioBox GO also includes a free license for PreSonus Studio One Prime, a barebones edition of the company’s acclaimed recording software. Unlike the free editions of some competing DAWs like Ableton Live Lite, Studio One Prime allows users to build sessions with an unlimited number of audio and instrument tracks, making it a uniquely versatile choice among free DAWs for beginning music production.

So, who should buy the PreSonus AudioBox GO?

The PreSonus AudioBox GO is marketed as one of the smallest, lightest, and most portable audio interfaces currently available, and it delivers on that promise at a very affordable price point. Its high-resolution AD/DA conversion and bus-powered design make it a solid choice for creating audio content on the go without compromising sound quality or having to lug a larger, heavier piece of hardware alongside your computer or mobile device.

The AudioBox GO does have a very small number of input and output channels, limiting users to a single microphone or line-level source and a single instrument along with two redundant stereo outputs for studio monitors and headphones. This limited I/O makes it less suitable for live recording of multiple performers, but the AudioBox GO is affordable enough to be a no-brainer for podcasters, musicians, and other creators who mix and edit audio or record one track at a time. If you’re all but sold on the AudioBox GO but need a dual-microphone option, the PreSonus USB96 performs similarly well and is also USB bus-powered.