Gaming doesn’t need to be stationary. From casual games to high-powered AAA titles, find the best gaming laptop that can handle it all. 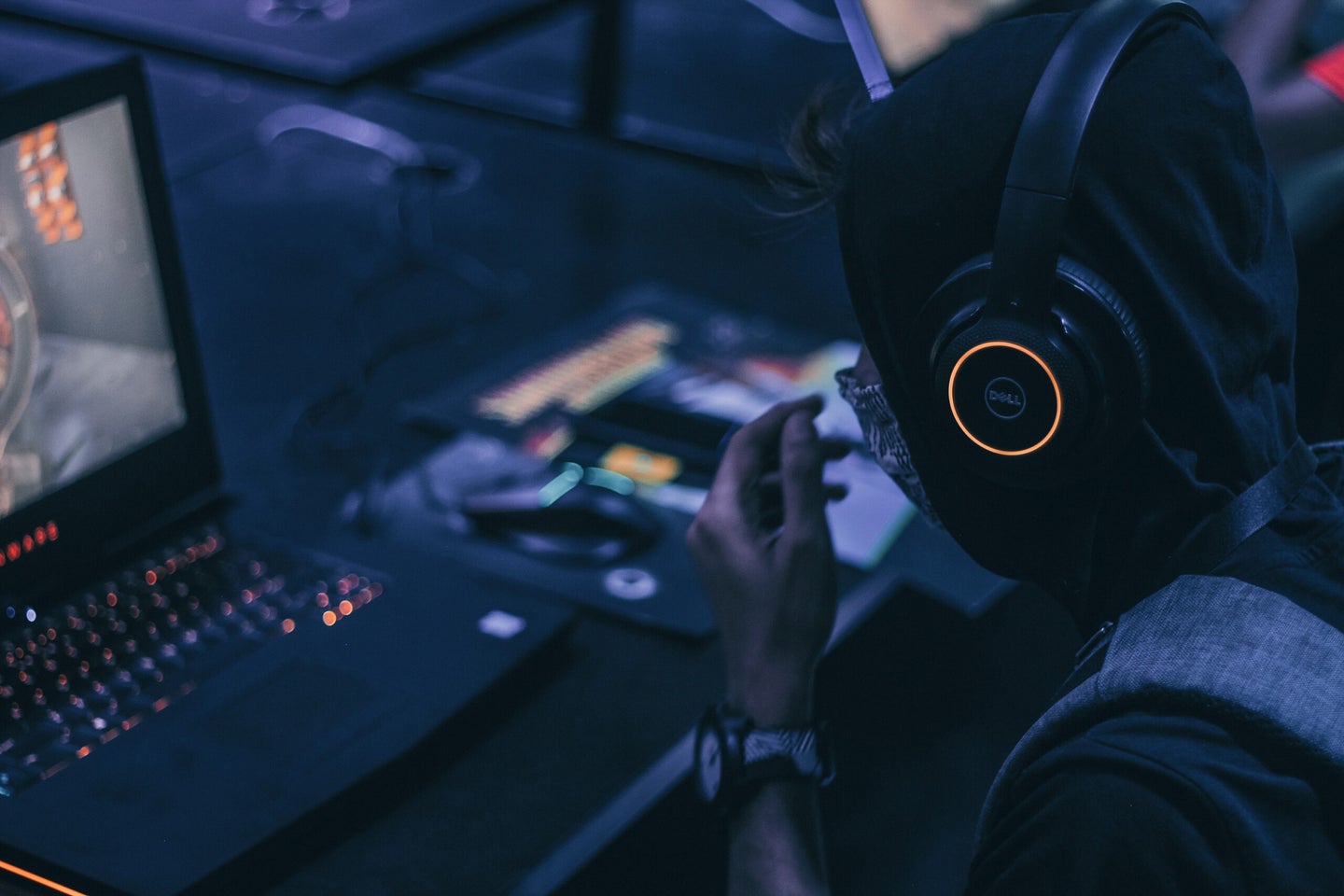 Here are the things to consider when buying the best gaming laptop. Fredrick Tendong via Unsplash
SHARE

Gaming laptops are an emerging category. Hardcore PC gamers may scoff that it simply isn’t possible to outfit a laptop with enough power (and enough cooling so that power doesn’t melt the hardware) for top-tier gaming. They’re both right and wrong. For one thing, mobile graphics cards have gotten better and better; they may never be able to reach the heights of enormous desktop cards, but you’d be surprised how powerful mobile GPUs (that’s a Graphics Processing Unit, usually referred to as a graphics card or chip) have gotten.

Another change is that many of the most popular games out there, including Fortnite, PlayerUnknown’s Battlegrounds (PUBG), and Minecraft simply don’t need the multi-thousand-dollar bleeding edge of tech. What that means is that the best gaming laptop can deliver amazing performance, on the go, of many of the world’s most popular games.

Things to consider when buying a gaming laptop

Gaming laptops can appear at first glance to be a mess of incomprehensible specifications. That’s because, well, they are—but they don’t need to be incomprehensible. The most important elements of a gaming PC are in its graphics, its processor, its memory, and its general hardware, which includes the screen and keyboard. Keep reading to learn more about what to consider before picking the best gaming laptop for you.

Related: Gaming headsets that will change how you perform

What type of CPU do you need?

The CPU is decreasingly important for gaming PCs, as they rely more and more on the GPU. But it can still be a bottleneck if you don’t opt for one that’s powerful enough. Ignore any gaming PC with an i3 processor; it won’t be powerful enough. To make sure you have enough juice, opt for one of Intel’s newest, 10th-generation i5 or i7 chips.

AMD has also made a huge splash with its Ryzen line of CPUs. These are becoming really common in desktop gaming PCs, and will certainly become more common in laptops, but there are only a couple of Ryzen laptops out there right now.

A great mid-to-high-level option from the venerable hardware maker. Amazon

This Razer laptop includes the newest Core i7 processor, in the 10th generation. These are the absolute fastest processors ever made for laptops; Intel says they’re up to 54% faster for gaming than the previous generation. This particular laptop is also nicely thin, at only 0.78 inches thick. That makes it comfortable to take with you wherever you go.

How important are crystal clear graphics?

The graphics chip, or GPU, is the single most important variable when shopping for a gaming laptop. It will decide whether high-end games will work, what resolution you can play them at, and how smoothly games will play. You can skimp in other areas to save a little bit of cash; the GPU is the one place where you absolutely do not want to cut corners.

Many non-gaming laptops use “integrated graphics,” which is essentially just a section of the CPU that’s dedicated to graphics. These aren’t really capable of doing anything above the absolute minimum for gaming; you need a separate chip.

Nvidia is the most popular maker of GPUs, and they have a pretty large selection of them. In general, the higher the number, the better the chip, so, if we take some of the more popular ones, the Nvidia GeForce 1650 is a pretty good budget chip, the GeForce 2060 is a good mid-powered chip, and the GeForce 2080 is excellent—though pricey.

Acer’s Predator Helios 300 is a mid-range gaming laptop; not too expensive, not too nutso in the specifications, but everything is well-chosen, well-constructed, and effective. It’s packing a GeForce GTX 1660 GPU, which is perfect for competitive gaming, casual work, and really anything besides virtual reality or the most demanding of games.

What refresh rate do you need in a screen?

The screen is more important on a gaming laptop than pretty much anything besides the GPU. After all, it’s what you’re intently staring at all the time, and, unlike with desktop gaming PCs, you can’t upgrade it.

Most come with a 15-inch or 17-inch display; the former is significantly more portable. Generally, the displays will be a 1080p resolution, though if you’re spending more than $2,000, look for a 1440p. But just as important as the resolution is the refresh rate, which affects the smoothness of what you see. Look for 144Hz or 240Hz to take advantage of fast graphics cards.

This MSI gaming laptop is big, but it’s a great blend of high-end specs at a competitive price. The screen is where things really shine: it’s 1080p, which may not seem like all that great by non-gaming standards, but it pairs that with a 240Hz refresh rate. Add in a 10th-generation Core i7 CPU and a GeForce RTX 2070 GPU and you’ve got some real power.

What’s the minimum RAM you need?

Wondering how much RAM do I need for gaming? RAM, also called memory, is an interesting topic for gaming. For many Windows PCs, maximizing RAM is essential, because some programs (like Google Chrome) use an absolute ton of memory to operate. Gaming isn’t actually that demanding of RAM, all things considered, but you’ll need at least 8GB and preferably 16GB. They also sometimes allow you to upgrade the RAM yourself, which is unusual among laptops and can be a really cheap way to upgrade later.

With upgradeable random access memory, you can make sure this option always has enough. Amazon

One of the hottest new trends in gaming is virtual reality, but not all are powerful enough to be compatible. This ASUS gaming laptop is a fairly upgradeable model, so you can unscrew the back and pop in more RAM and more storage if you need it. Doing this kind of upgrade yourself is quite easy, and far, far cheaper than buying it already upgraded.

Be sure to get enough storage

Games are huge, and getting more huge by the day. You’ll need an absolute ton of storage space for some new games; a full install of Call of Duty: Modern Warfare clocks in at 231GB, an astronomical figure. Borderlands 3, Microsoft Flight Simulator, and Assassin’s Creed: Odyssey are all well over 100GB. If you want to have more than a couple of games on your PC, you’ll need a lot of storage—and you’ll want it to be SSD storage, not HDD. SSD is significantly faster, meaning shorter load times.

This model is sleek, gamer-chic, and extremely powerful for the price. Amazon

Alienware’s m15 is one of the better-designed laptops on the market; there’s no mistaking it for a non-gaming laptop, but it also isn’t garish or cheap-looking at all. With a current-generation i7 CPU, an RTX 2070 GPU, and one terabyte of SSD storage for plenty of games, the m15 is one of the better all-around laptops on the market. It’s an expensive laptop, but you’ll get what you pay for.

There are a bunch of companies that make gaming laptops; some specialize in it and do nothing else, while others simply pump higher-end GPUs into their regular laptops, slap on some neon lights, and call them a gaming laptop. Here are some of the best brands when it comes to the top models.

Alienware started out as an independent company but has been owned by Dell since 2006. That’s actually not a bad thing; Dell makes some of the best displays on the market, so Alienware usually has great screens, and they offer tons of options to customize exactly what you want.

Asus gaming laptops are sold under its ROG (Republic of Gamers) sub-brand. Its Zephyrus G14 is one of the best-reviewed laptops of the year, and the company is also pretty reliable for mid-range gaming hardware.

Razer, with its trademark neon-green three-headed snake logo, started out by making high-quality gaming accessories, like keyboards and mice. The company has since branched out into more complete hardware, including tablets and laptops, and its Razer Blade line of laptops is very well-regarded.

Best budget gaming laptops: What you get for under $500

Here’s the thing about budget laptops: you probably shouldn’t. This is simply an expensive category, with mid-range laptops starting well over a thousand dollars. That said, if you’re playing some more casual games, like Minecraft, you can get by with much less power than you’d think. At this price point, you’re probably getting integrated graphics—GPUs are expensive!—but if you must, go for something like the Lenovo IdeaPad that has a Ryzen chip, which will have Vega graphics. These aren’t going to cut it for any high-end games, but they’ll be more powerful than Intel integrated graphics.

A final word on finding the best gaming laptops

Gaming laptops are an increasingly fun and capable way of getting your gaming wherever you find yourself. Today, the models are expensive, but you’re getting so much for your money: high-refresh-rate screens, long battery life, fairly impressive graphics performance, and surprisingly good keyboards. If you look for the right specs, you can land yourself something really fun.