66 sick board games for people who love TV and movies

From Star Wars to Stranger Things 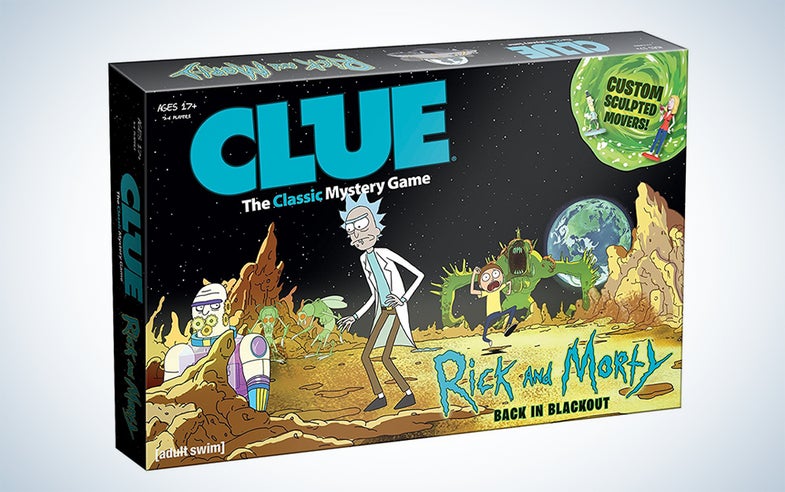 Did you know there were so many versions of Clue? Well now you do. Because of this guy, in the office, with too much time on his hands.

Houses and hotels are out. Forts and hideouts are where it’s at. The Stranger Things Monopoly is full of series-inspired goodies. For example, it’s got Walkie-Talkie and Blinking Lights cards instead of Community Chest and Chance. $22.

A classic game of whodunit with a character named Mr. Poopybutthole. You must solve who took the plans to Rick’s portal gun, where they are hiding, and what they used to steal it. $29.

Pick a character—including favorites Rick, Daryl, and Glenn—and strategize on how to best defend your people and home from walkers. The game includes four locations and lasts for 12 rounds. Don’t be a zombie’s dinner. $23.

The battling co-operative Big Trouble in Little China game has over 400 cards. Work together to defeat the evil forces of Lo Pan and The Three Storms. $30.

Where in the world is my Carmen Sandiego reboot? Seems like everything else is coming back. Why not her? Wait never mind. It’s coming to Netflix. In this game, you’ve got to track down Carmen Sandiego and retrieve everything she stole.The card game can be played with 2-4 people. $18.

Collect items and help navigate E.T. back to his spaceship. $30.

The Goonies adventure card game makes let’s you truffle shuffle your way to finding One-Eyed Willy’s pirate treasure. Each player is a character from the Goonies and you must work together and pool your resources. $40.

Pick your favorite Goosebumps monster and try to make it to the typewriter before your opponents do. $22.

Get this version of Monopoly if only because Baby Groot is so ca-yute. Plus! The Chance cards look like cassette tapes. $29.

I’m green with envy. Ever since I was a boy I wanted a green thing to growl at me. $60.

It’s like the movie—not the ridiculous new one with The Rock—but you won’t be in danger of being eaten by any wild animals. Unless someone you are playing with is hangry. Roll the dice, beware the danger cards, and work your way to the center of the board. $16.

In the Mars Attacks dice game, you are a Martian trying to destroy Earth. Succeed. Please. The 3-6 player game lasts about 20 minutes. $16.

Take your stinking paws off my game, you damned dirty ape! The game lasts up to two hours, is for 1-4 players, and has characters and events inspired by the original movie. $34.

The gang travels around the board, using a mystery decoder to rid a theme park of ghouls. $17.

I spy with my cyclops eye something I want to buy: the X-Men board game. You command two X-Men characters traveling to three battle areas to recruit heroes or fight villains. Roll the dice to see whether you are taking or giving damage. The game comes with 18 figurines. $45.

This is one of those games you play until sunrise, forming alliances, passing notes, and ruining lifelong friendships. It’s great. $54.

The only risk here is choosing the wrong Star Wars version of the classic strategy game. Ye gods look at all those options: $19 or $33 or $76.

The only trouble with Star Wars is there isn’t enough of it. That being said, there are a lot of Star Wars Trouble games. $17 and $20 and $18.

And here’s the expansion pack.

Play as members from the Original Series or the Next Generation. Crossover game? Count me in. $34.

A cooperative game through space. Complete five missions without be thwarted by intergalactic obstacles. $30.

The classic two-player Battleship, but down spacecraft from Star Wars rather than patrol boats or aircraft carriers. $20.

I sure hope the game is more enjoyable than the movie! $19.

Play out the battle between the Galactic Empire and Rebel Alliance in this 2-4-player board game. Obi-Wan Ke-nobody will turn down an invite to your game night. $90.

There are innumerable chess variants. This one uses characters from Star Wars—and is just $40. $40.

A game where you win by stealing Legos from your friends? 6-year-old me was crushing this game before he knew it existed. $42.

Bomb your way around the board collecting powers and battling robot masters. $50.

Monopoly with a Tim Burton twist. $60.

You can kill someone with a poisoned doughnut. $58.

Think you know Doctor Who? This version of Trivial Pursuit will probably prove you wrong. $25.

Travel around this villain’s edition Doctor Who Monopoly board in the Tardis or as K-9. $20.

This version of the old-timey classic comes with a collectible, bronze Dalek dice cup. $30 or $40.

I’m drooling. Make your way around the board while airing your grievances? Make every day a holiday. $14.

In this cooperative game, you and your friends are the Serenity crew managing a series of heists. $20.

As a resident of District 12, try to avoid the reaping. Collect food, water, and clothing to stay alive. $10.

A trivia game where you also get to play Rock, Paper, Scissors, Lizard and Spock. $10.

Section 3 of clause 21a in the roommate agreement clearly states that you must own this game. $6.

Defeat evil forces on the Hellmouth as one of the Scooby gang. $72.

Choose any reincarnation of the Doctor to defeat the Daleks in their scheme to erase the the Doctor from history. $25 or $33.

Play as one of five Dalek armies trying to conquer the world. $28.

This vintage-y Batman board game glows in the dark. $90.

No, but I am afraid of losing. A game inspired by my favorite childhood show? There is only one left, so I’ll buy it if you don’t. $92.

Two to four people are Na’vi warriors tasked with protect the Tree of Souls. $65.

Two games in one! The Avengers Risk—which spans the entire Marvel universe—also includes a Guardians of the Galaxy card game. $21.

Disneyland’s Tower of Terror is closing, but this Clue game could help keep the magic alive. $75.

Or travel back to the classics with this Back to the Future Yahtzee game.

This’ll be The Thing to play at your next board game night. $60.