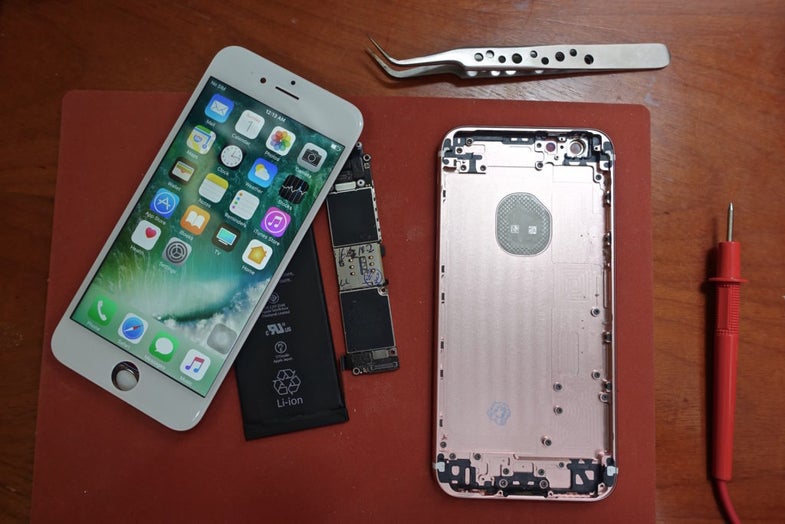 Scotty Allen first got the idea to make his own iPhone over beers with fellow gadget enthusiasts. The American hacker and engineer lives part-time in Shenzhen, China, a city full of chaotic electronics markets and an experimental spirit fostered by its inhabitants. The breadth of available parts made him wonder if it was possible to build his own iPhone 6S from the ground up.

“Yes, absolutely, and it’s not actually that hard,” he says. “The biggest barrier is language.” On a deeper level, Allen says that what drove him was a sense of curiosity about Shenzhen’s bustling cell phone markets; the project gave him an excuse to learn more about them.

In the end, it took about one to two months and cost roughly $300 in parts —as well as some extra cash for skilled help along the way — but Allen created a 16 GB, Rose Gold iPhone 6S that runs iOS 9.

It’s an undertaking that Allen compares to building a car from scratch by getting the parts from a junkyard: some of the parts in the Frankenphone are genuine Apple parts, perhaps scavenged from older iPhones that have been recycled. The phone’s logic board, the corresponding TouchID sensor (which must be a match for the specific logic board), and the camera, he says, are Apple-made parts. But he’s less sure about the provenance of the metal shell that houses the phone, which he thinks was made by another manufacturer.

“‘I made my own iPhone,’ is often what I say,” he explains, when asked how we would characterize the accomplishment. “It looks just like the original.” The phone’s operating system came with the logic board he purchased.

One minor issue he ran into along the way: the volume buttons didn’t click the way they should. A tiny piece of metal placed in the right spot solved that problem, though.

Allen, a 37-year-old software engineer and former Google employee who describes himself as a nomad, appreciates the availability of the multitude of cell phone parts he found in the city. “That level of access is something that I would love to see in the rest of the world,” he says. “As an electronics geek, having access to parts is just super important in general.”

It’s a project that highlights the globalization of the electronics industry, in which Apple assembles cell phones in Asia that are then sold all over the world, while an accompanying spare-parts marketplace allowed one engineer to simply build his own iPhone and skip the trip to the Apple Store.

Allen published a nearly 24-minute video explaining how he did it and wrote about the project on his website.

“I never really thought much about what happens when I get rid of a phone—recycle it, or donate it,” he reflected, in the video. “I think a lot of them end up here, taken apart for parts or turned back into nice working phones.”