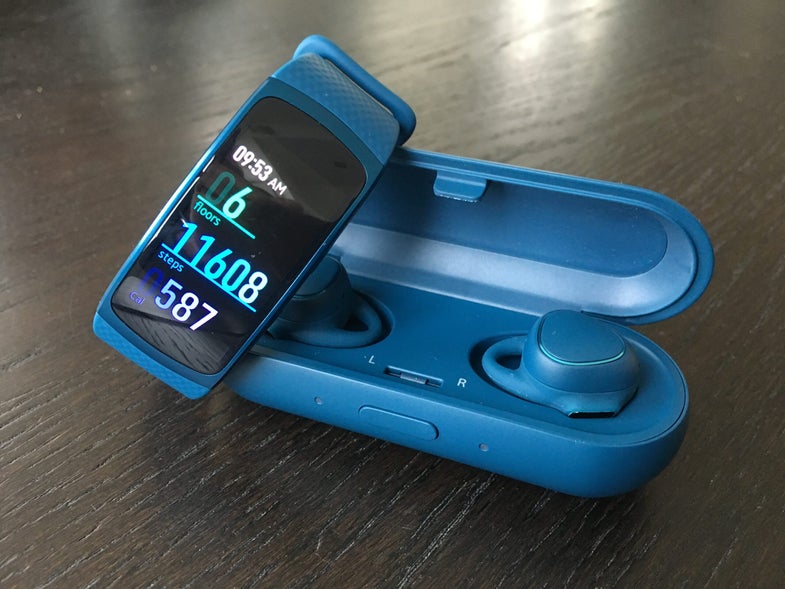 When fitness and technology team up, it’s rarely elegant —the standard is a smartphone strapped to your arm, and a pair of wired earbuds.

To build out its ecosystem of smartphone peripherals, Samsung has released two new fitness products that make it easier to work out wirelessly: the IconX wireless earbuds and the Gear Fit 2 smartwatch. Samsung has also revamped S Health, its proprietary fitness tracking app, to be more social-connected and assist in reaching workout goals.

In terms of hardware, the IconX is the more exciting product, so let’s start there. These earbuds are truly wireless, which means they’re not tethered together like the popular Jaybird headphones. They’re tiny computers for your ears—they hold up to 4 GB of music and track fitness stats like heart rate and distance travelled. You can control music and fitness settings by swiping up and down or tapping on the buds’ capacitive touch panels, which kind of make you look like a sporty secret agent.

The idea behind the IconX is that you could pop in the earbuds and go for a run, without sacrificing fitness tracking or sick beats.

The buds are geared towards running outdoors. In one mode, they block external noise, but another mode uses built-in microphones to allow a certain amount of sound from the outside to pass through the headphones, giving the listener some situational awareness. And the feature works really well. In a demo, I was able to listen to some preloaded music while having a (slightly disjointed) conversation with the PR rep. It’s more than enough pass-through to hear the honk of a car horn, or someone shouting “Free Doughnuts!” You can also listen to music without hearing the world around you, for use in safer environments. The microphones in the buds that allow you to hear your surroundings can also be used to take phone calls.

The Gear Fit 2 is an update to Samsung’s original fitness-focused smartwatch in 2014, and this iteration adds another tier of features like GPS and smart activity recognition that will one day just be seen as standard on all devices.

Untethered is the name of Samsung’s game, and the Gear Fit 2 can be thought of as an intermediary between the streamlined workout features of the IconX earbuds and strapping a 5.5-inch hunk of silicon to your arm. The fitness tracker records all the basic data like heart rate and estimated calories burned, but also analyzes the movement of your wrist to analyze whether you’re kayaking or doing yoga. During the demo Samsung reps admitted that this feature doesn’t really add any benefit other than properly labelling your workout, but it’s nifty and automatic.

The smartwatch has its own GPS, which logs distance and can even post your workout straight to Facebook (if the watch is connected to your phone). For runners, this could be the key feature that finally allows them to leave the phone home. Following in the footsteps of its smartphone sibling, the S7, the Gear Fit 2 is pretty much waterproof, with an IP68 rating.

The display is a 1.5-inch AMOLED panel, which is curved to contour the wrist. Samsung kept those of us with the wrists of weak children in mind as well, providing two sizes, small and large. As a small-wristed individual, I can attest that we have not been neglected, and the wristband can be ratcheted down to minuscule sizes.