One day robots could come to your rescue. First, they have to learn to walk. 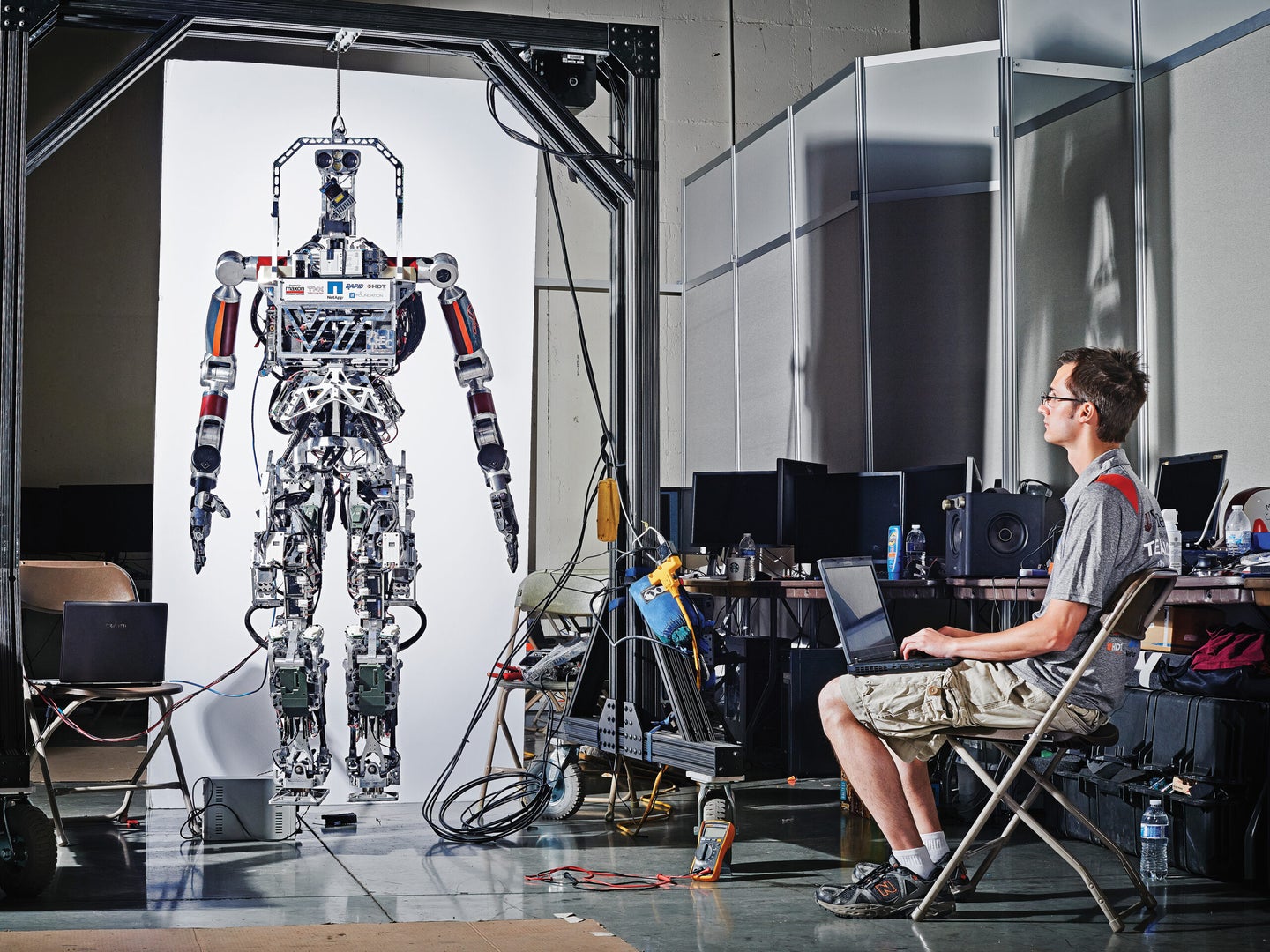 The engineering highlight of this 5-foot-10-inch bot is its series-elastic joints. By compressing and recapturing kinetic energy with each spring-loaded step, Escher’s actuators mimic the combination of efficiency and shock absorbance found in human joints. F. Scott Schafer
SHARE 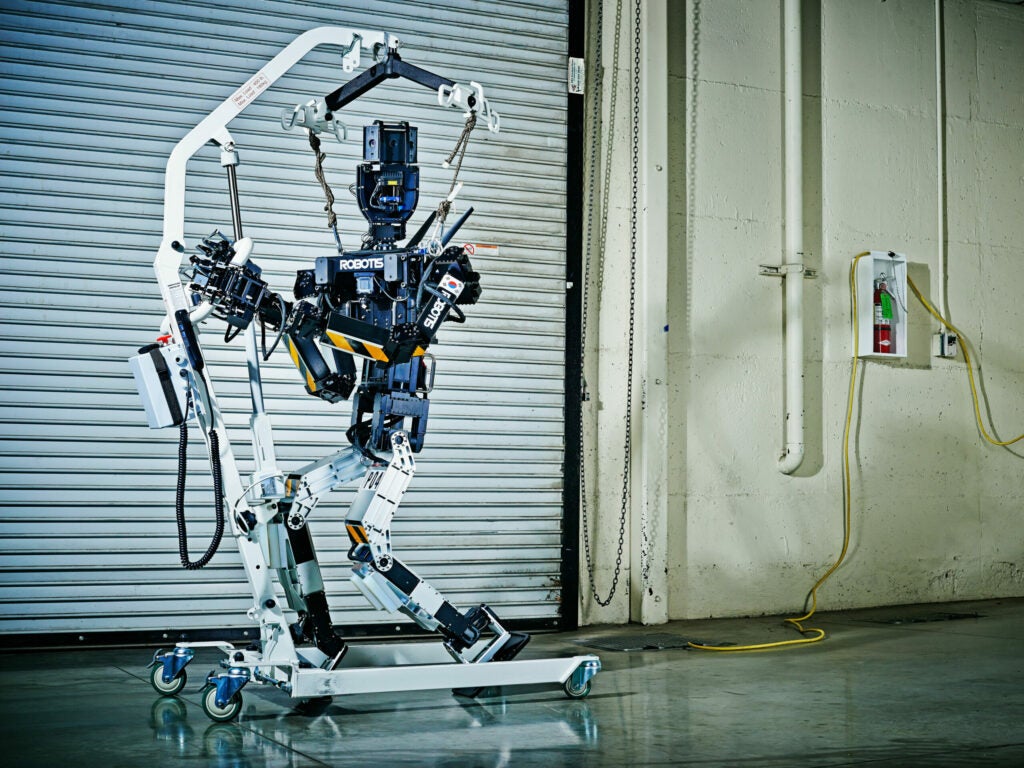 The DRC featured a contingent of South Korean robots, including Thormang 2. Three teams were based in the country, and four more used the Thormang platform from Seoul-based firm Robotis. The company plans to start selling the robot, making it one of the first commercially available, full-size humanoids.

In 2012, DARPA announced the most ambitious robotics competition in history. To kick-start the development of robotic first responders—machines capable of deploying to natural or man-made disasters—the Pentagon’s research agency­ proposed a series of challenges. Robots would be tasked with navigating and interacting with a mock disaster site. They would open doors, traverse rubble, climb stairs, and turn valves. At times, they would have to act with almost complete autonomy in order to simulate communications breakdowns in a real-life crisis.

Teams from around the world entered the two-year competition. The Pentagon gave some of them multimillion-dollar robots to program, while others received funding to develop their own machines. But despite the generous allotted time and resources, the DARPA Robotics Competition (DRC) would be extremely difficult. Legged robots, by far the most common design in the contest, are notoriously unstable, even when crossing level terrain. For most teams the concern was not winning the DRC. It was surviving it.

The DRC finals were held in June at the Fairplex fairgrounds in Pomona, California. And, sure enough, many robots were hauled away from the two-day event in pieces. Falls were rampant, and every tumble drew sympathetic howls from the thousands of spectators watching from the stands. One humanoid fell so hard, its head flew off its body.

In the end, three teams won a combined $3.5 million in prize money by completing eight tasks in less than an hour. But more to the point, the DRC served as a catalyst for robotics development. It forced many of the world’s leading roboticists to tackle some of the field’s hardest problems. None of the entries left the competition ready to respond to the next big disaster. But thanks to the DRC, the dream of robots that can function in the human world, whether that means pulling victims out of harm’s way or simply assisting the elderly, is closer than ever.

Click through the gallery below to learn more about each robot contestant.

This article was originally published in the January/February 2016 issue of Popular Science, under the title “Protoheroes.” 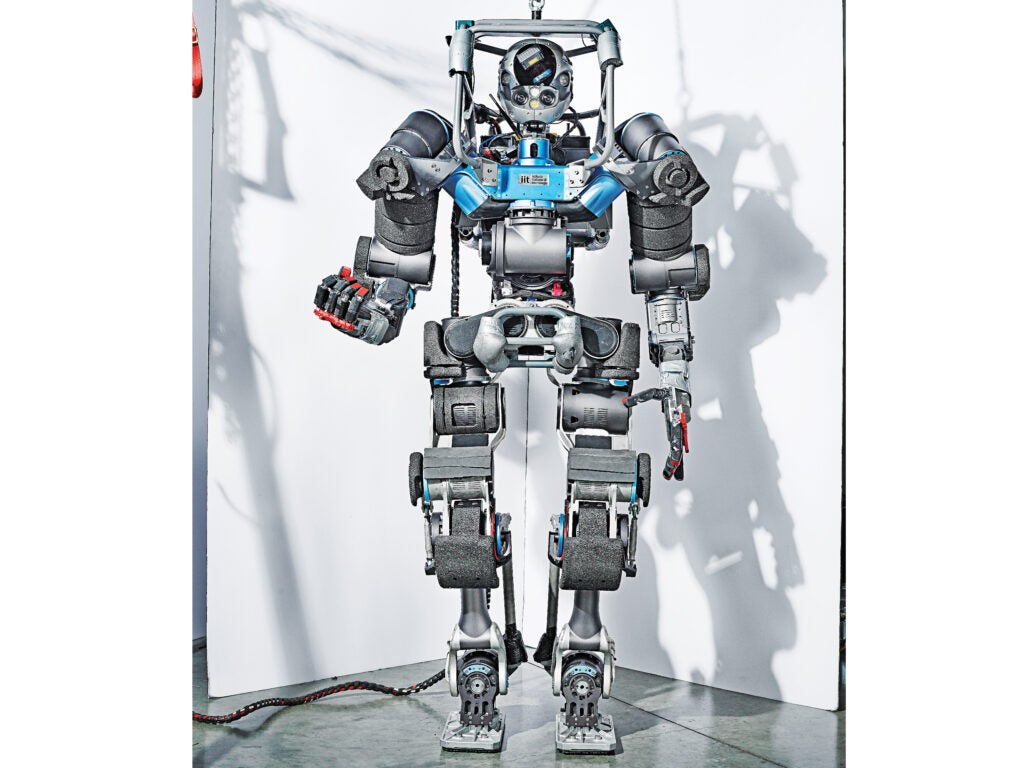 WALK-MAN (Italian Institute of Technology and University of Pisa)

Faced with human-centric tasks, such as driving a vehicle and operating power tools, most teams in the DRC built humanoid robots. And since two-legged designs are prone to falls, roboticists armored this 6-foot-tall, 264-pound machine with strategically placed shock-­absorbing pads. 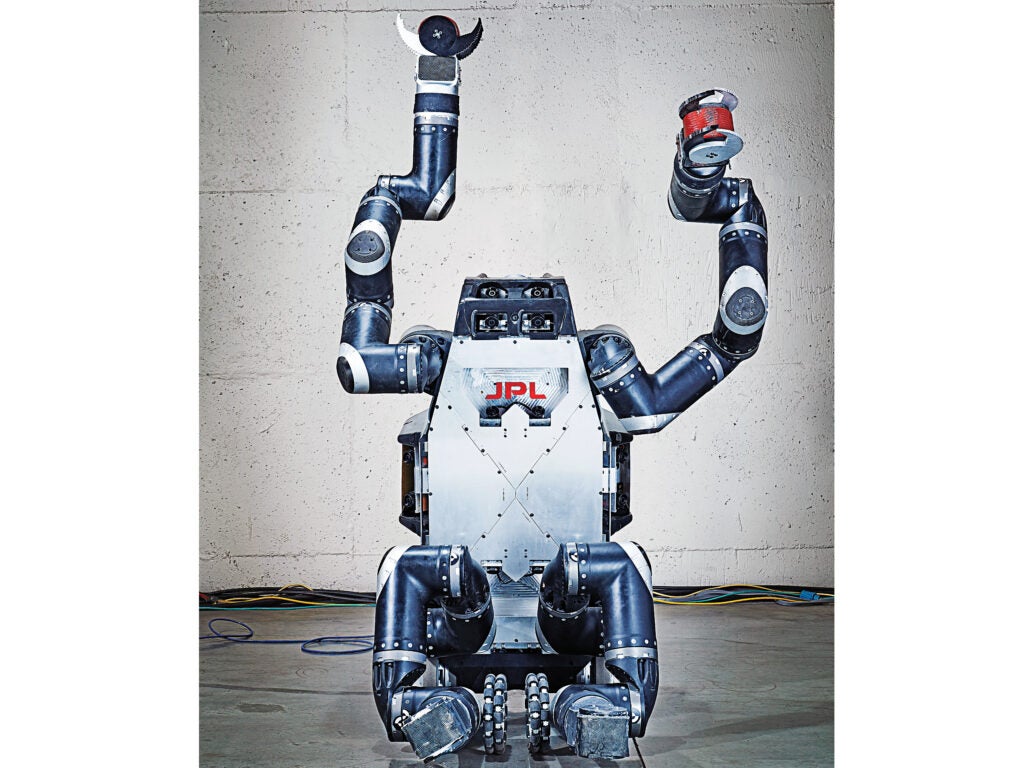 NASA claims that its entry was primate-inspired, but RoboSimian’s defining feature isn’t even mammalian. Each of its four limbs has 28 joints, giving the 275-pound robot a degree of flexibility that more closely resembles an octopus’s tentacles than an orangutan’s arms. 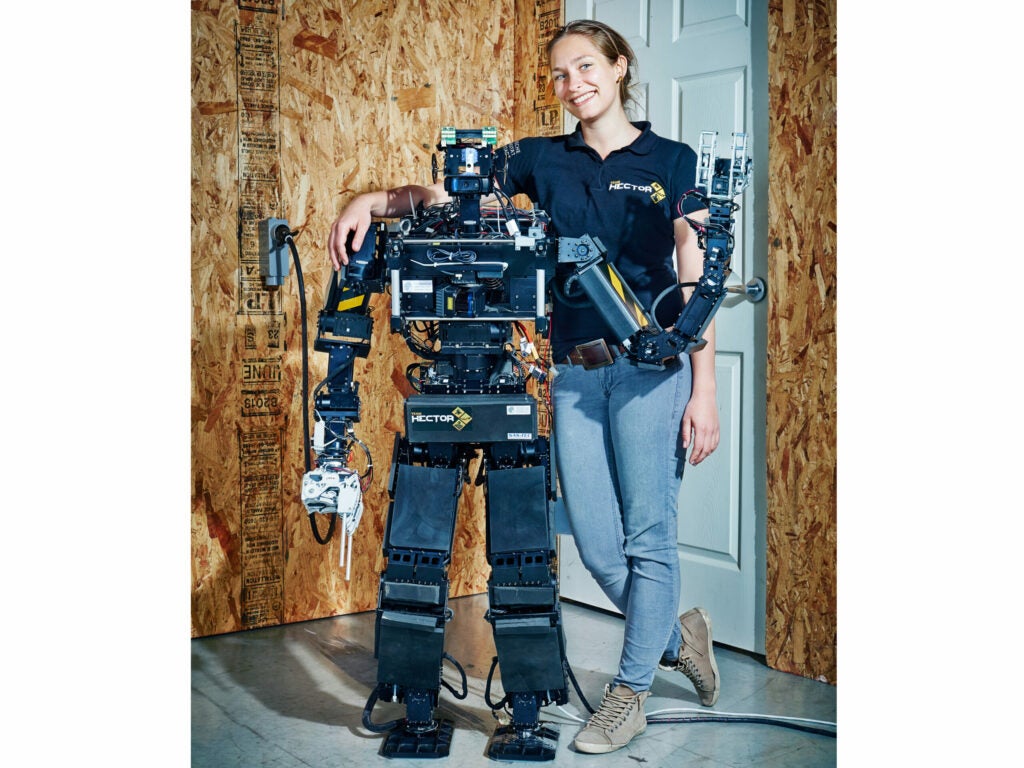 Despite the prize dollars at stake, the DRC was defined by a sense of collaboration. The German-built Johnny 05, for example, incorporated software and hardware from four would-be rivals. Its makers also posted their work online as free, open-source code. 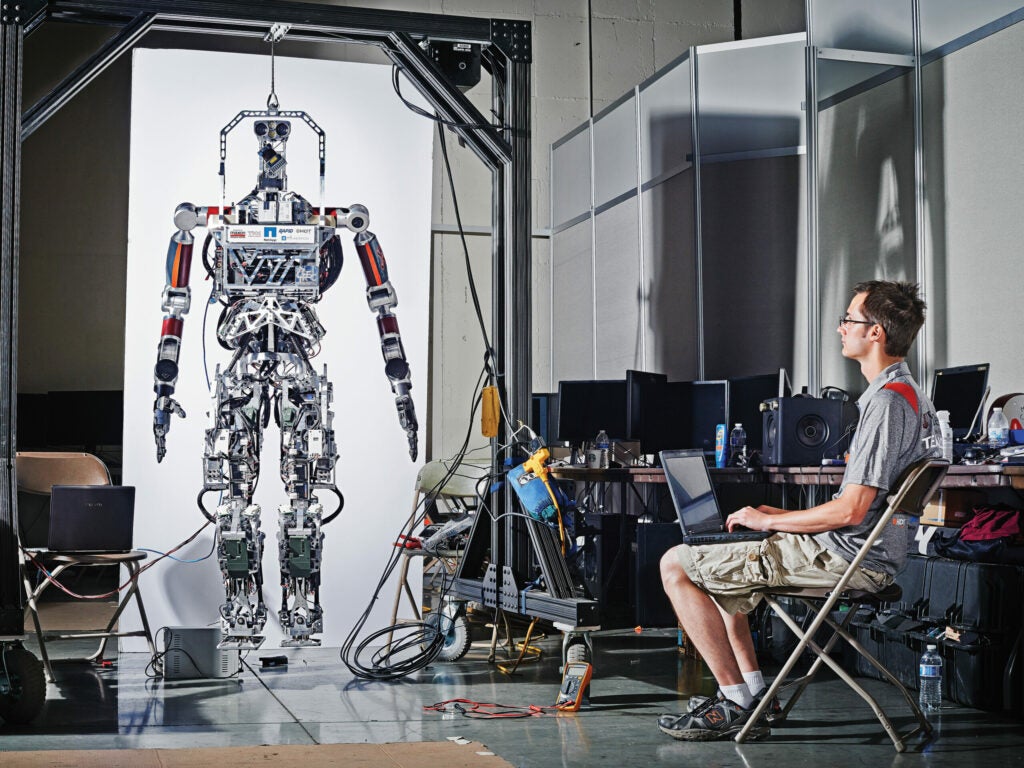 The engineering highlight of this 5-foot-10-inch bot is its series-elastic joints. By compressing and recapturing kinetic energy with each spring-loaded step, Escher’s actuators mimic the combination of efficiency and shock absorbance found in human joints. 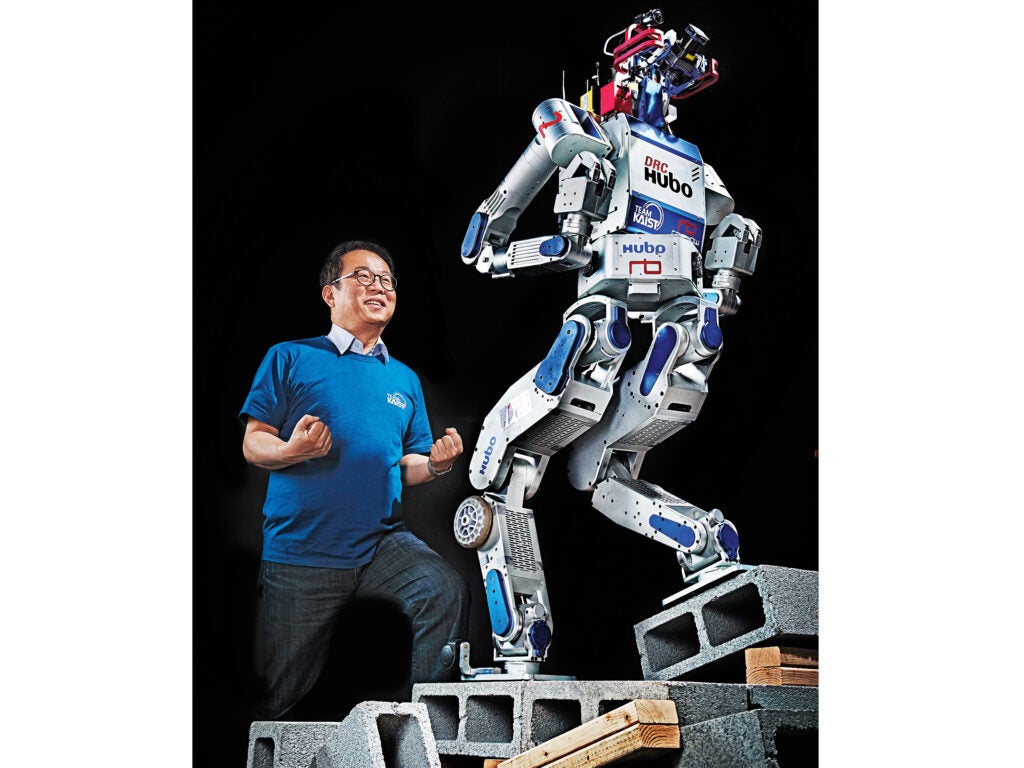 The top prize of $2 million went to a humanoid from South Korea whose combination of dexterity and mobility—it could roll around on wheeled knees—trounced the competition. It could also grab the utility vehicle’s roll cage in order to swiftly dismount from it, a task that slowed or destroyed other robots. 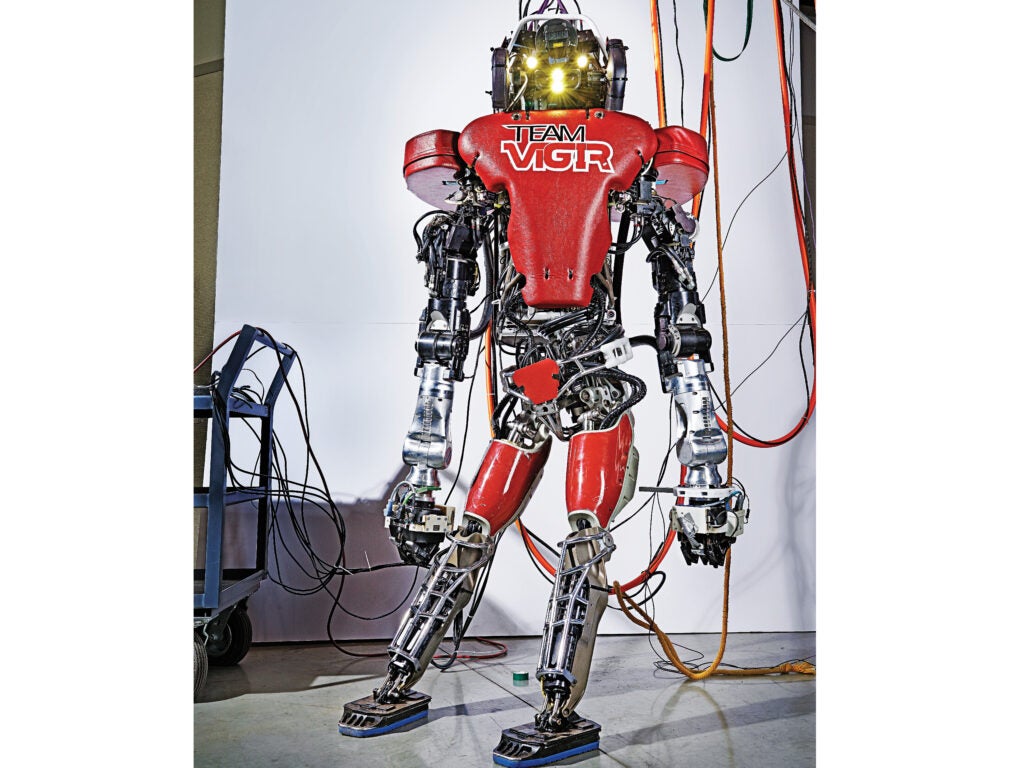 Florian was one of seven Atlas robots in the finals. The Pentagon provided them to qualifying teams, such as the international Team ViGIR. Although its members could make minor hardware modifications, the main challenge was to write software that kept the towering, 6-foot-2-inch machine from faceplanting while crossing uneven terrain. 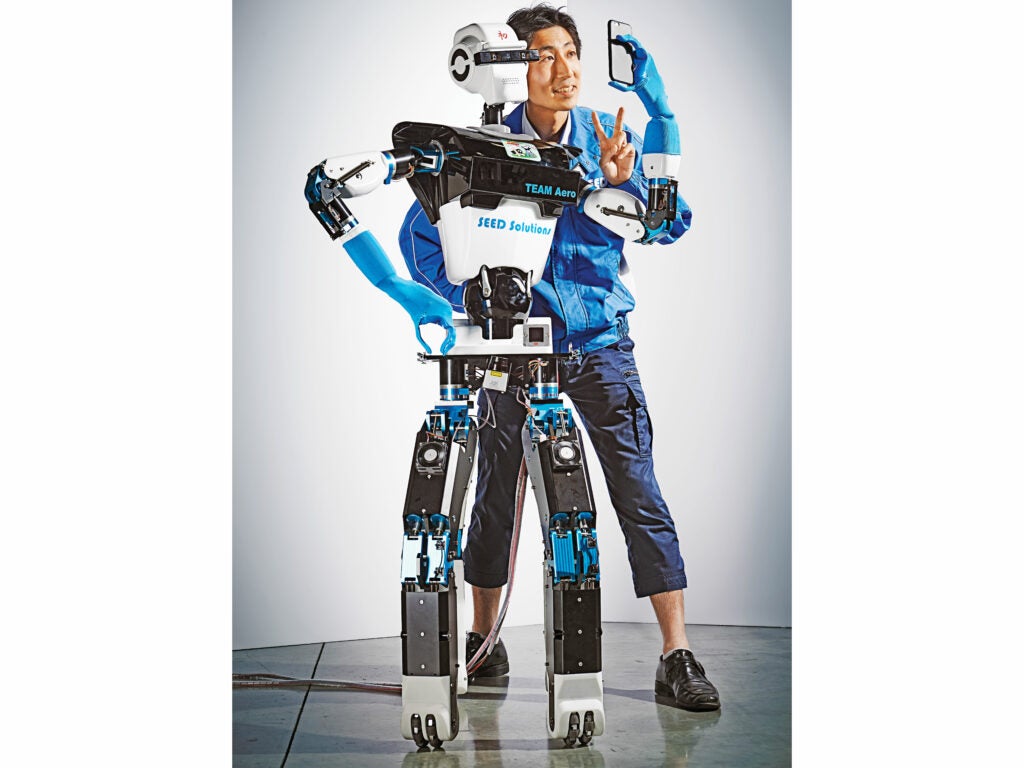 Because walking robots tend to become falling robots, some teams opted for the assumed stability of wheeled movement. Results, however, were mixed. This 110-pound bot from Tokyo, whose legs end in embedded wheels, had to be pulled from the course after repeated topples. 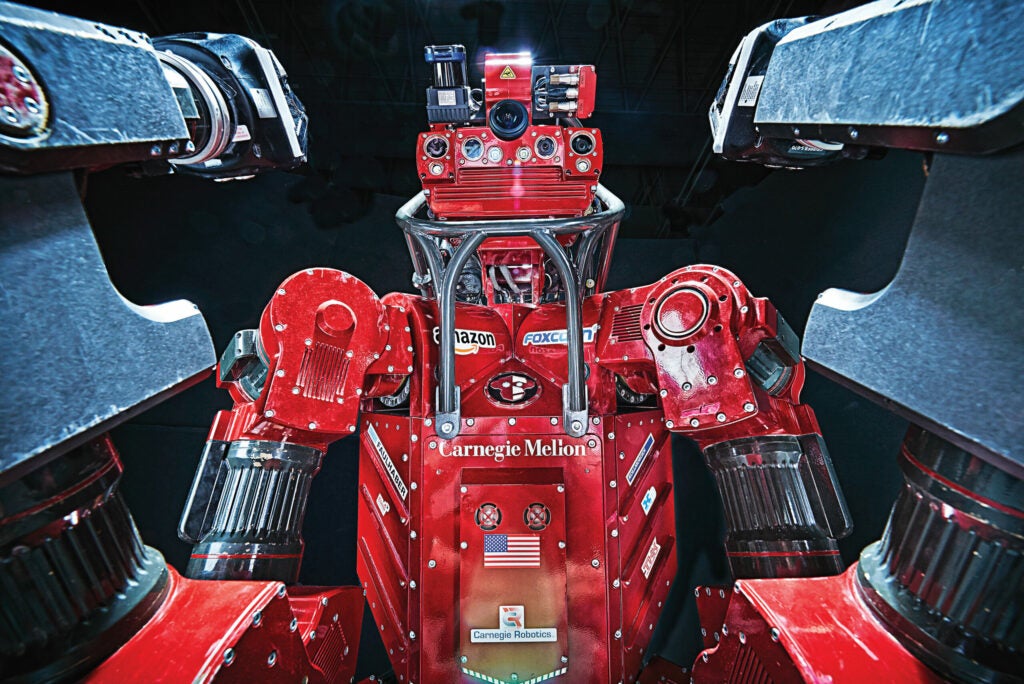 Though it only took third place, CHIMP was the breakout star of the DRC. In the most dramatic run of the finals, this cross between an ape and a tank—it rolls on tracks built into its shins and forearms—took a spill, and then became the only robot in the competition to get up after falling.

The DRC featured a contingent of South Korean robots, including Thormang 2. Three teams were based in the country, and four more used the Thormang platform from Seoul-based firm Robotis. The company plans to start selling the robot, making it one of the first commercially available, full-size humanoids.
DARPA
Military
Features