Robots Walking, Robots Toppling, and other Photos from the DARPA Robotics Challenge

We who are about to fall salute you 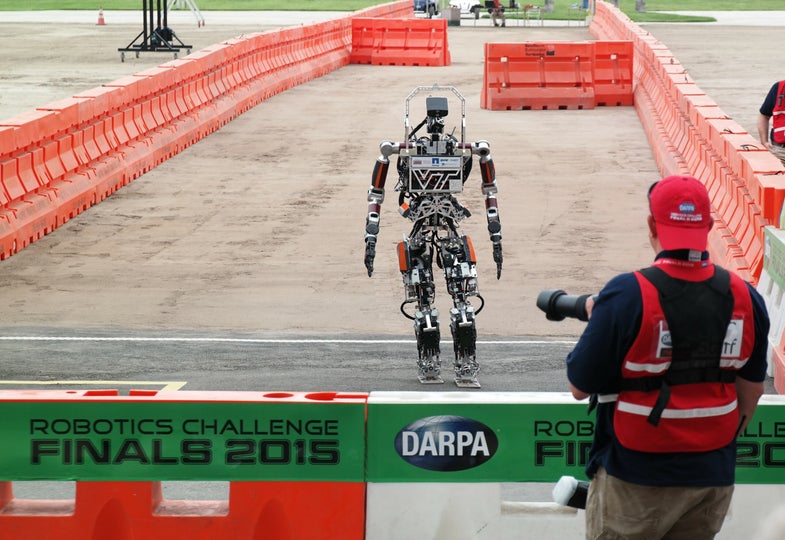 Most of the teams at the DRC at least attempted to drive across the opening stretch of the challenge course, using Polaris utility vehicles. But, for various reasons (including the difficulty of getting out of the vehicle), the first heat of four teams chose to let their robots walk. That included Team VALOR, the Virginia Tech team whose robot we featured in a 2013 cover story, back when it was called THOR, with an innovative, human-mimicking actuator technology that pegged it as a possible frontrunner. Two years and a major personnel shuffle later (the team's original leader, Dennis Hong, left for UCLA, and took much of his lab with him), the rebranded ESCHER had one of the most impressive bipedal gaits at the DRC, but still fell repeatedly, and failed to finish the course during its two runs. Erik Sofge
SHARE

When it came to pratfalls, the DARPA Robotics Challenge (DRC) did not disappoint. The roughly three-year competition to build disaster-ready robots came to a head last weekend at the Fairplex in Pomona, California, and much of the coverage of the event has focused on robots falling over. Fair enough. But there was more to the DRC than the mingled joy and pain of watching anthropomorphic machines destroy themselves in front of a gasping crowd. Here’s a closer look at how this landmark contest played out. 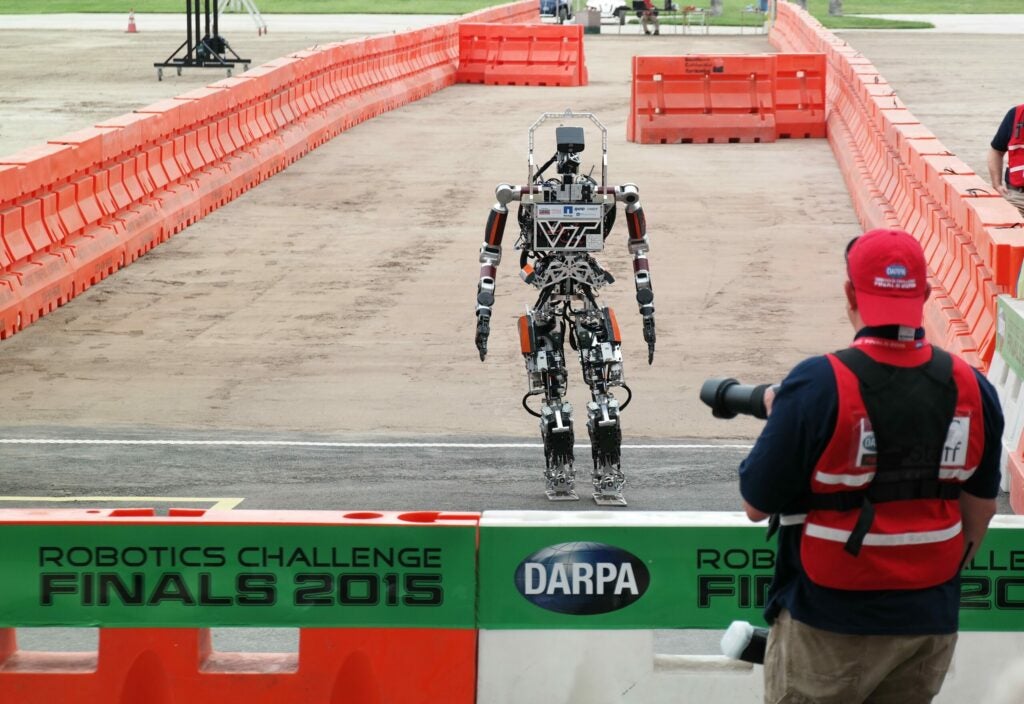 Most of the teams at the DRC at least attempted to drive across the opening stretch of the challenge course, using Polaris utility vehicles. But, for various reasons (including the difficulty of getting out of the vehicle), the first heat of four teams chose to let their robots walk. That included Team VALOR, the Virginia Tech team whose robot we featured in a 2013 cover story, back when it was called THOR, with an innovative, human-mimicking actuator technology that pegged it as a possible frontrunner. Two years and a major personnel shuffle later (the team’s original leader, Dennis Hong, left for UCLA, and took much of his lab with him), the rebranded ESCHER had one of the most impressive bipedal gaits at the DRC, but still fell repeatedly, and failed to finish the course during its two runs. 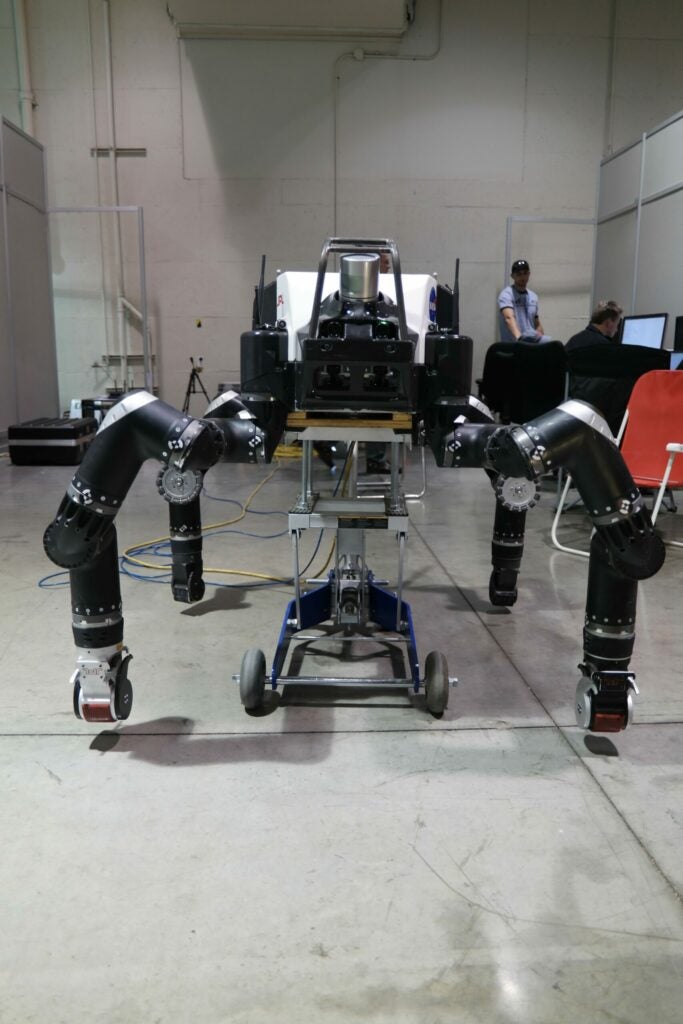 Teams with the lowest scores during their practice run–which were held on Thursday, the day before the DRC Finals officially got underway–hit the course first. The high-scoring robots, such as RoboSimian, the robot built by NASA’s Jet Propulsion Laboratory, spent most of the day waiting in the team garage, a hangar-like building a short walk from the grandstands. Some teams used this time to practice aspects of their upcoming runs. By all accounts, the four-limbed, 4.5-foot-tall RoboSimian barely moved an inch before its two runs. 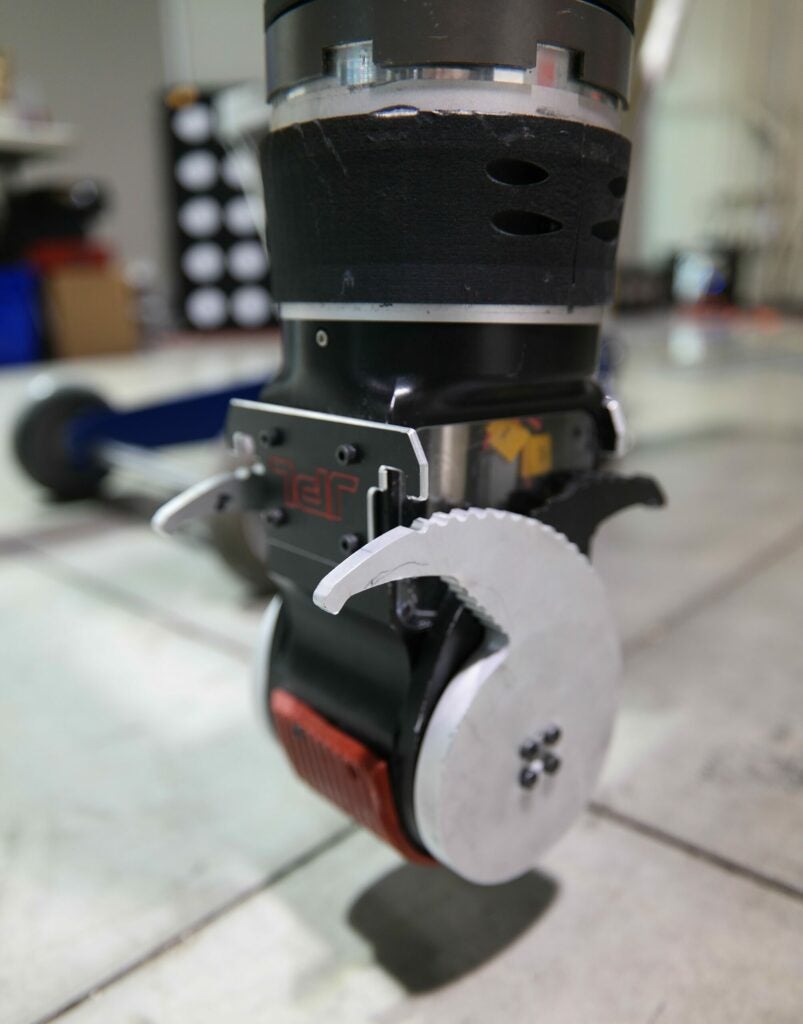 Most robots used three or four-finger grippers to tackle the DRC’s manipulation tasks, which included turning a door handle, rotating a valve, and using a power tool to cut a hole in a wall. But since RoboSimian was designed as a testbed for off-world robot explorers, its masters erred on the side of durability. The claw-like hooks on its limbs stayed out of the way during all-fours movement, and rotated forward when needed. 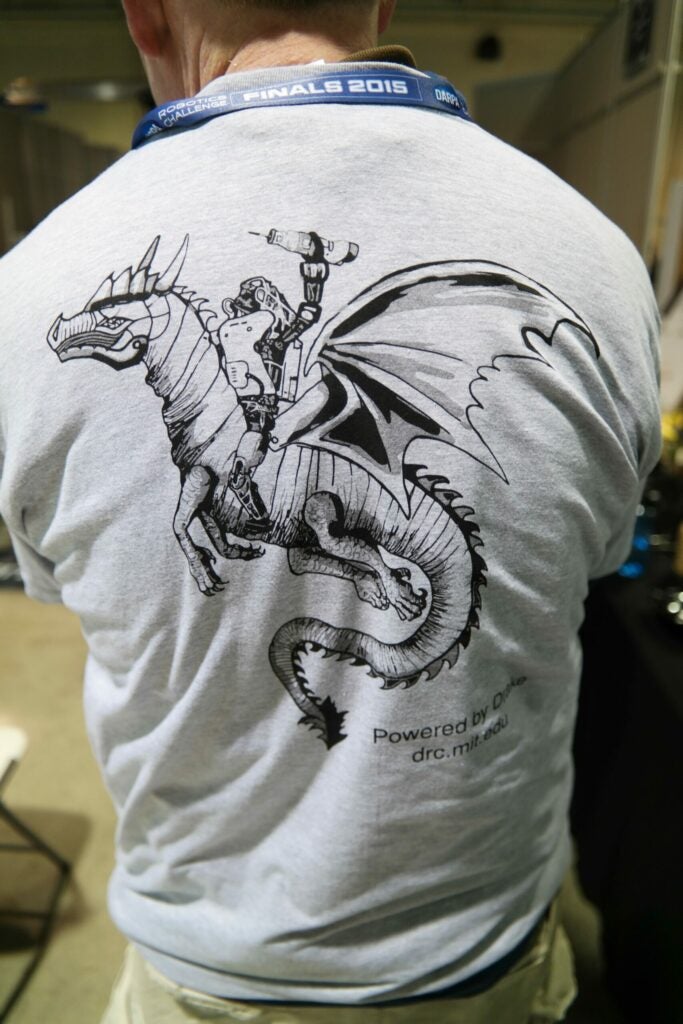 Every team came to the DRC with matching T-shirts, but Team MIT’s was the clear champion. MIT was one of six teams that advanced to the finals using a DARPA-provided Atlas robot, a six-foot-tall, 400-pound humanoid built by Boston Dynamics, the firm that was acquired by Google in 2013. Unfortunately, the Pentagon didn’t pay anyone to develop dragons. 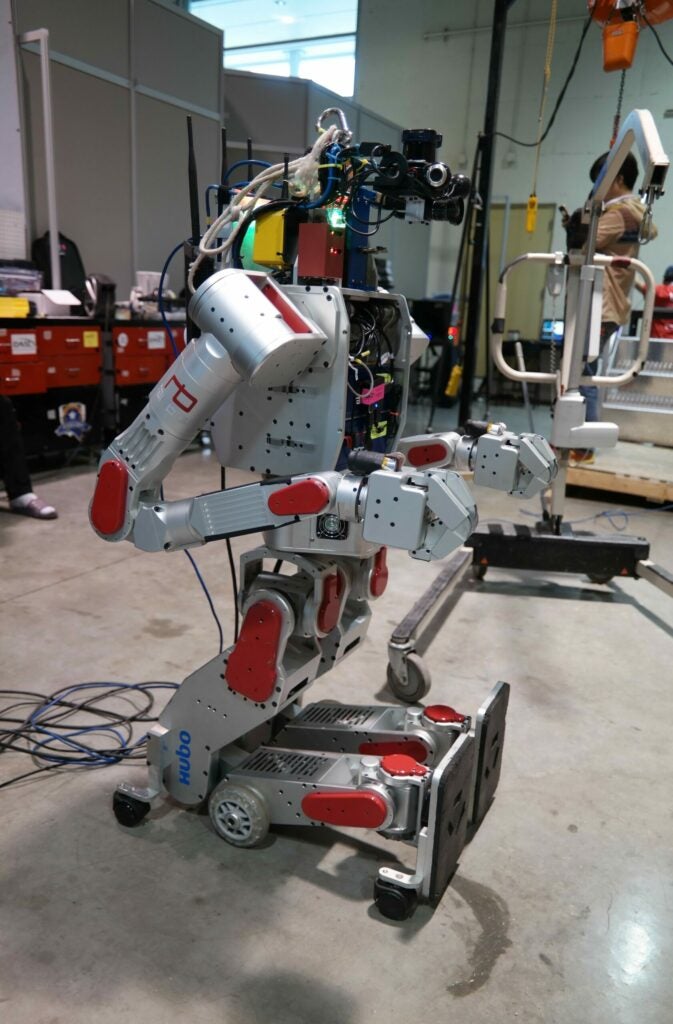 The University of Nevada at Las Vegas fielded one of two Hubo robots at the DRC. Hubo is 5-feet, 9-inches when it stands, which was almost never. The humanoids spent most of their time on the course, and in the garage, with their legs folded under them. Both Hubo teams added wheels to their robots, allowing them to move and accomplish manipulation tasks with more stability than an upright biped. 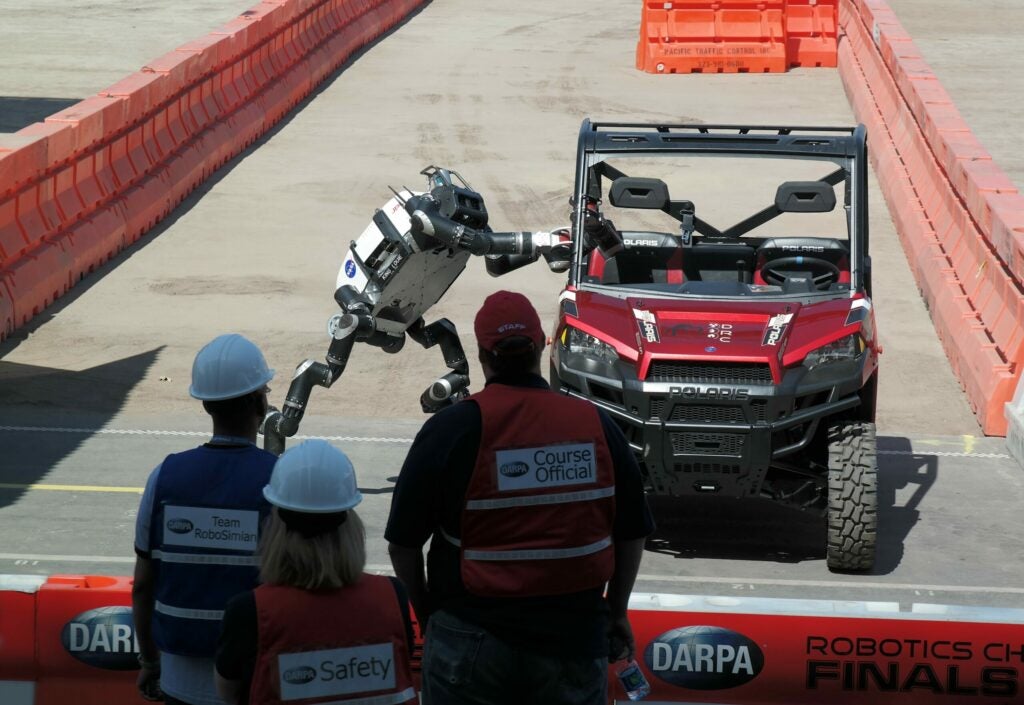 Robots had a maximum of one hour to get through the challenge course. The pace, in other words, was anything but breakneck. There were moments of real suspense, though, such as when robots tried to dismount–or egress–from their utilities vehicles. Many competitors fell during this task, triggering a rest (a 10-minute penalty, as officials and team members hauled the machines back to their feet), and costing them a point. With only eight points available during each run, egress was crucial for any team hoping to win one of the DRC’s three cash prizes. RoboSimian successfully egressed during both of its runs, providing a rare glimpse of the robot’s humanoid form factor. Similar to the two Hubos in the finals, RoboSimian spent most of its time rolling through the course, on wheels that weren’t part of its original design. 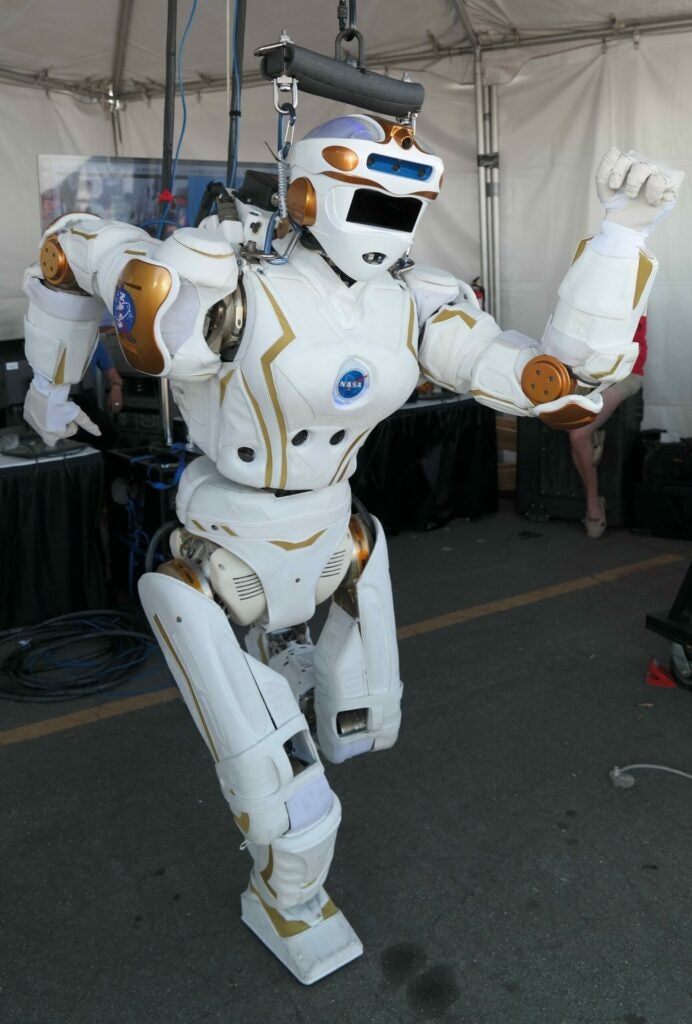 NASA had two robots in the DRC, but the agency’s more photogenic robot, Valkyrie, failed to score any points in the 2013 trials in Miami, and didn’t advance to the finals. Valkyrie made it to the event anyway, though, drawing crowds in the the exhibition area as it cycled through poses. 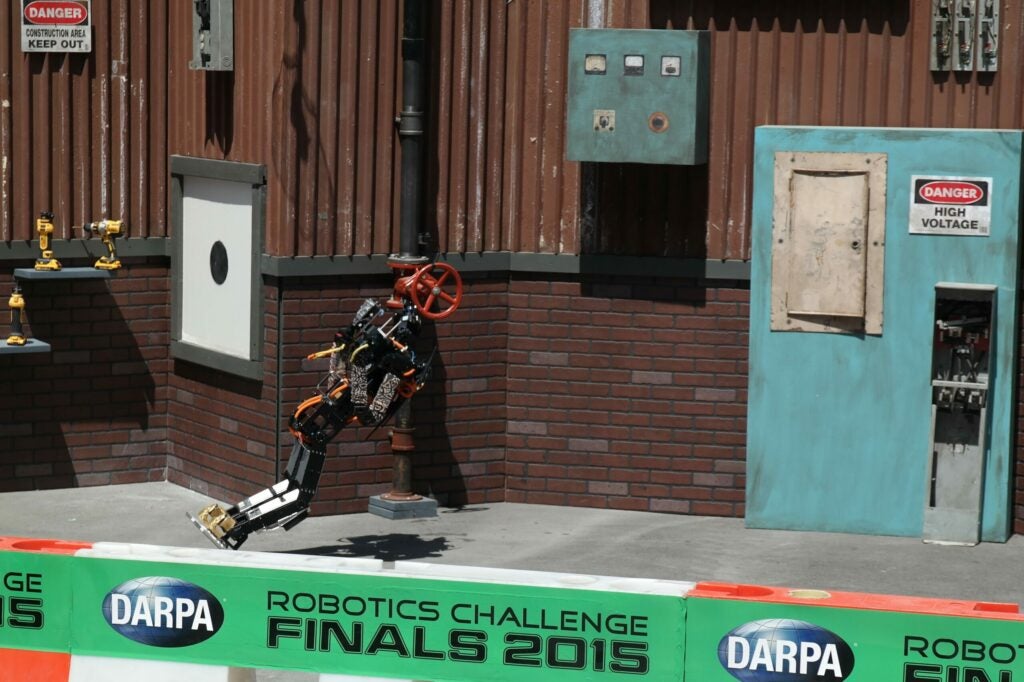 The Fall of THOR

THOR started its DRC journey as an understudy. The five-foot-tall humanoid–originally called THOR-OP–was a backup plan, ready to be deployed only if its bigger sibling, THOR, wasn’t ready for the trials in 2013. Sure enough, researchers from the University of Pennsylvania and Virginia Tech were forced to field the smaller robot, and when team leader Dennis Hong moved his RoMeLa robotics laboratory to UCLA, he took THOR-OP with him. Though the rechristened THOR wobbled dramatically, and fell multiple times at the finals, it performed better than ESCHER (the larger THOR-based robot used by Virginia Tech), finishing 13th out of 23 teams. 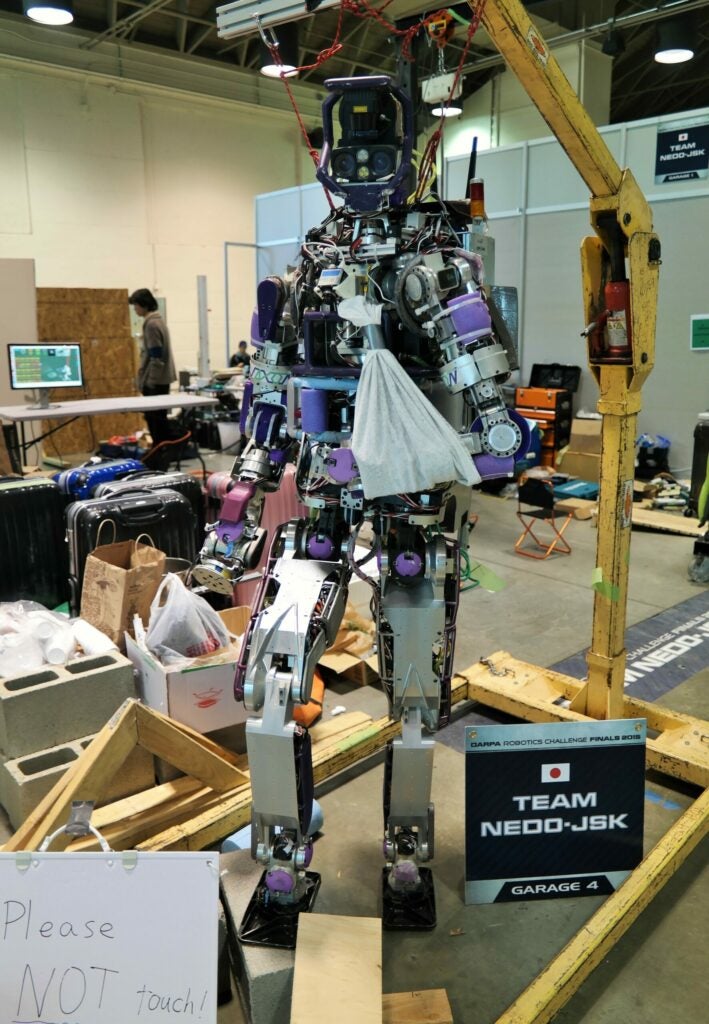 As anyone who’s read about or seen footage of the DRC knows, falling was rampant. Nearly all of the robots took at least one spill, including Jaxon, from Japan’s Team NEDO-JSK. The six-foot-two humanoid made it inside the facility portion of the simulated disaster zone, before toppling onto its left arm. 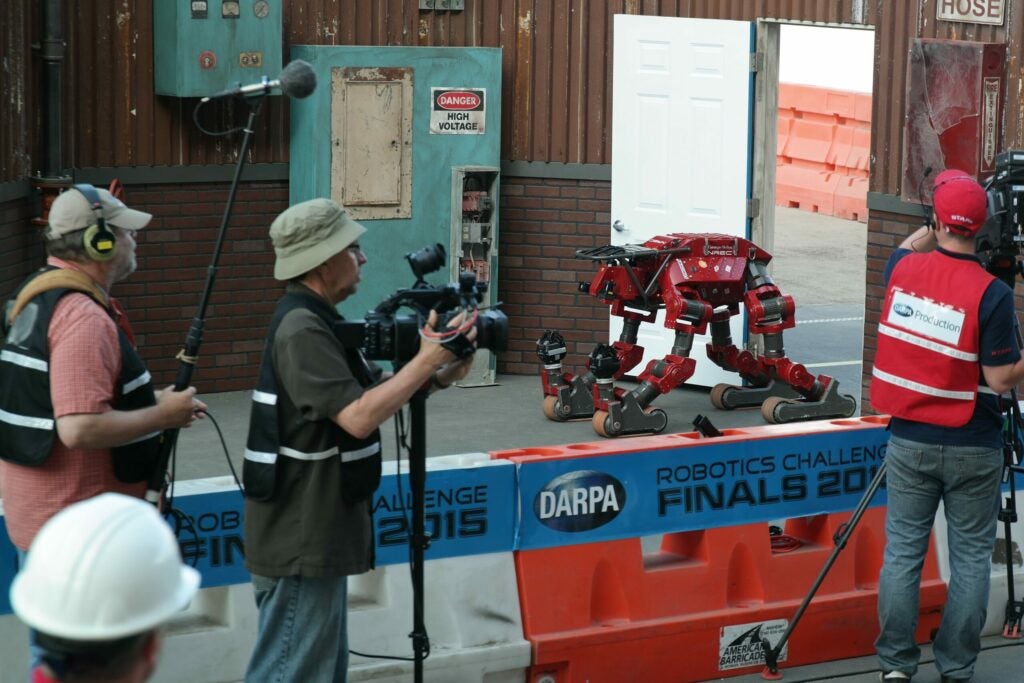 CHIMP Rises To The Occasion

During its first run, Carnegie Mellon University’s CHIMP did what so many other robots already had–it fell. But then, it did what no other robot at the DRC even attempted–it got up. Instead of calling for a reset, and taking what would have been a competition-ending 10-minute penalty, CMU’s Team Tartan Rescue used a combination of remote commands and autonomous programming (since the robot landed halfway into the “facility,” its communication signals were extremely limited) to eventually get the robot back onto its rubber tracks. 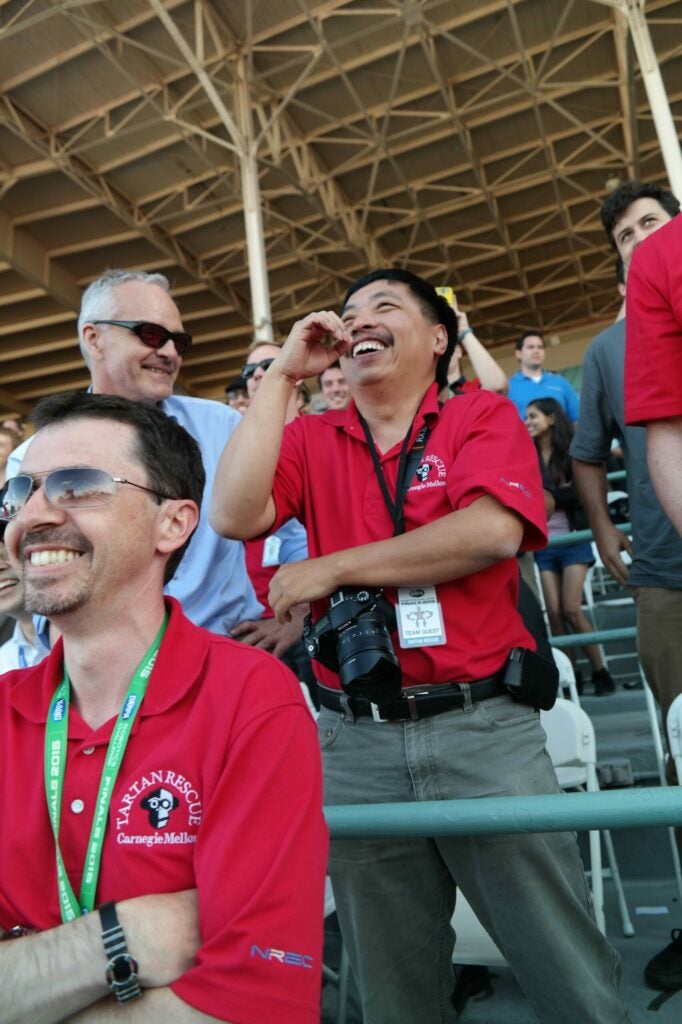 Since each team was allowed two runs–one on Friday, and one on Saturday–and the robots with the best scores would be on their parallel, identical courses at roughly the same time, the assumption was that the most exciting runs would take place on Saturday evening. But CHIMP’s run on Friday was the most dramatic of either night, and arguably the highlight of the entire DRC. The five-foot-tall robot took extra time egressing from its Polaris, fell while entering the facility (which was considered impossible, given its stable posture and use of tracked movement instead of walking), and had trouble cutting through the wall. Finally, CHIMP struggled on the final task, its 443-pound frame sliding back down the stairs, and at one point shoving the entire platform forward. The crowd screamed and cheered throughout, as did CMU’s Tartan Rescue. As CHIMP’s time crept closer to the one-hour mark, Herman Herman (center), the new director of CMU’s National Robotics Engineering Center, told his fellow team members, “Take a deep breath. Just keep breathing.” CHIMP conquered the stairs, and ultimately took third place at the DRC, winning $500,000. 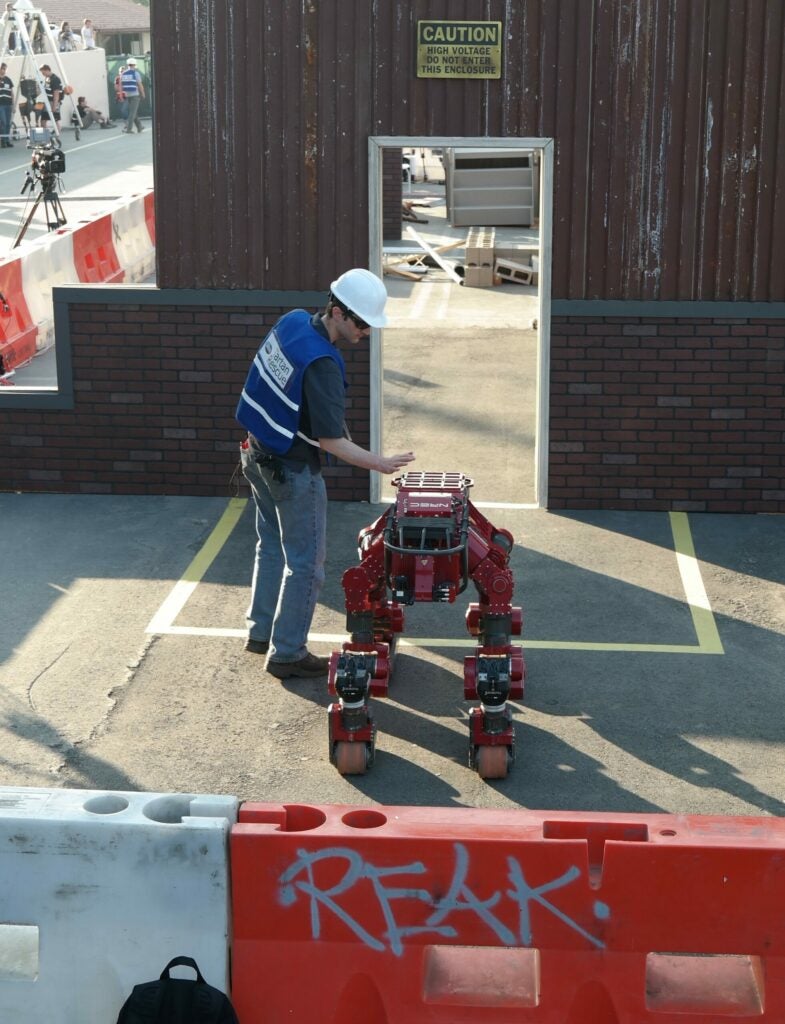 Though expectations were high after its crowd-pleasing run the previous day, CHIMP’s second run was a disaster. Its Polaris collided with a barricade, forcing an emergency shutdown. Other problems piled up, until the robot ran out of time, and exited the course. A member of Tartan Rescue gave the robot a pat while walking past. 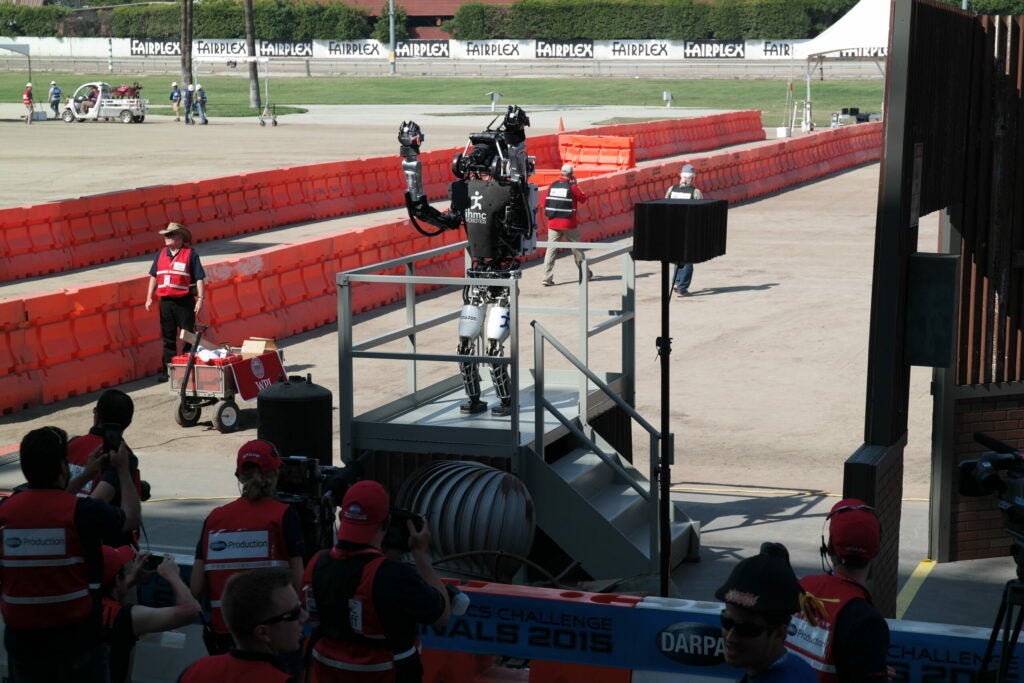 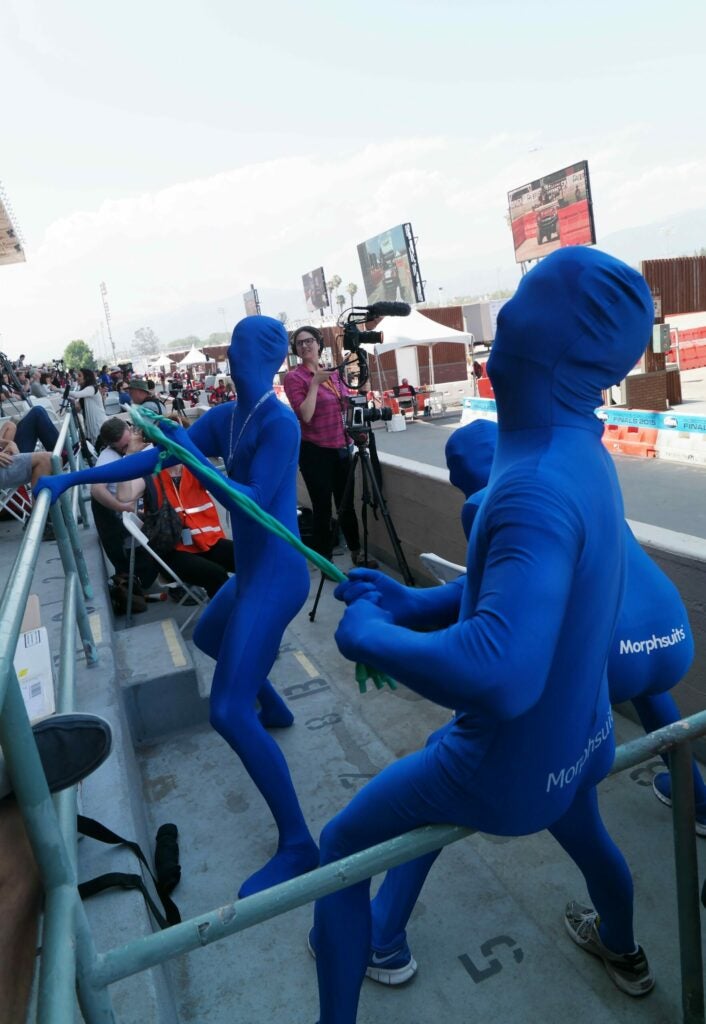 Roboticists Do The Darndest Things

Though CHIMP and RoboSimian were the fan-favorite robots among the thousands of spectators that attended the DRC Finals, Team IHMC field the most popular humans. The team wore fuzzy animal hats, carried around a couch, and a few of them put on blue body suits and launched T-shirts into the stands. They were hard-pressed to explain any of these choices, but the crowd ate it up. 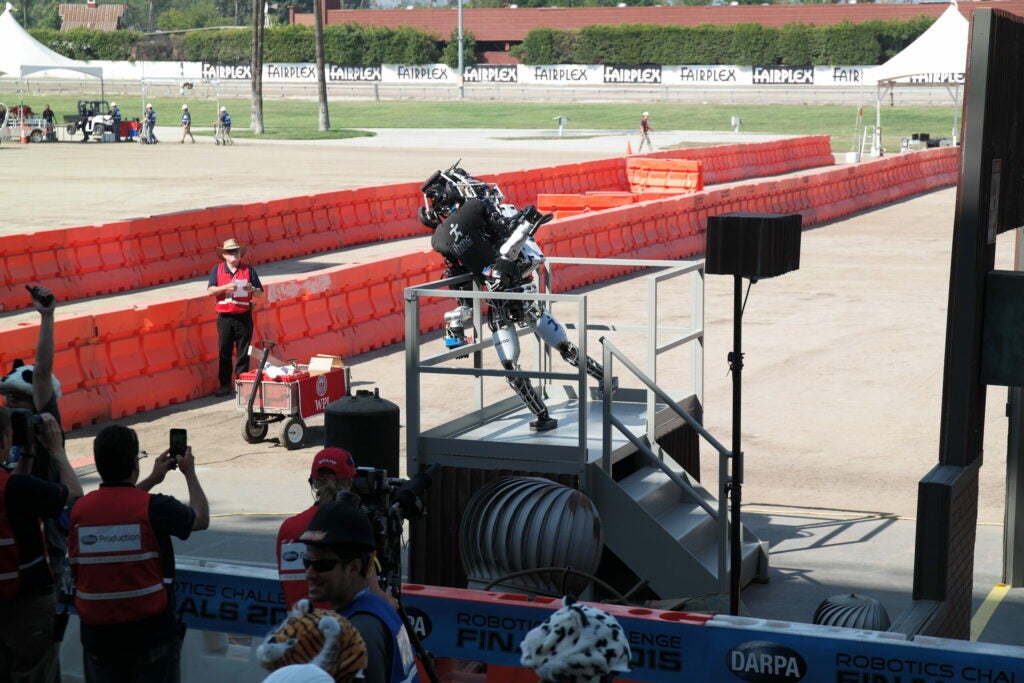 In keeping with their class clown image at the DRC, Team IHMC programmed various showboating behaviors into their Atlas. After finishing its second run, the team members directing the robot from back in the garage activated one of these, and had it walk in a triumphant circle at the top of the platform. They couldn’t hear the crowd yelling, though, as the humanoid’s damaged hip (due to falls on the previous day) sent it lurching to one side. Running Man finally powered down without warning, seemingly drunk on its own success, but really just slightly busted. 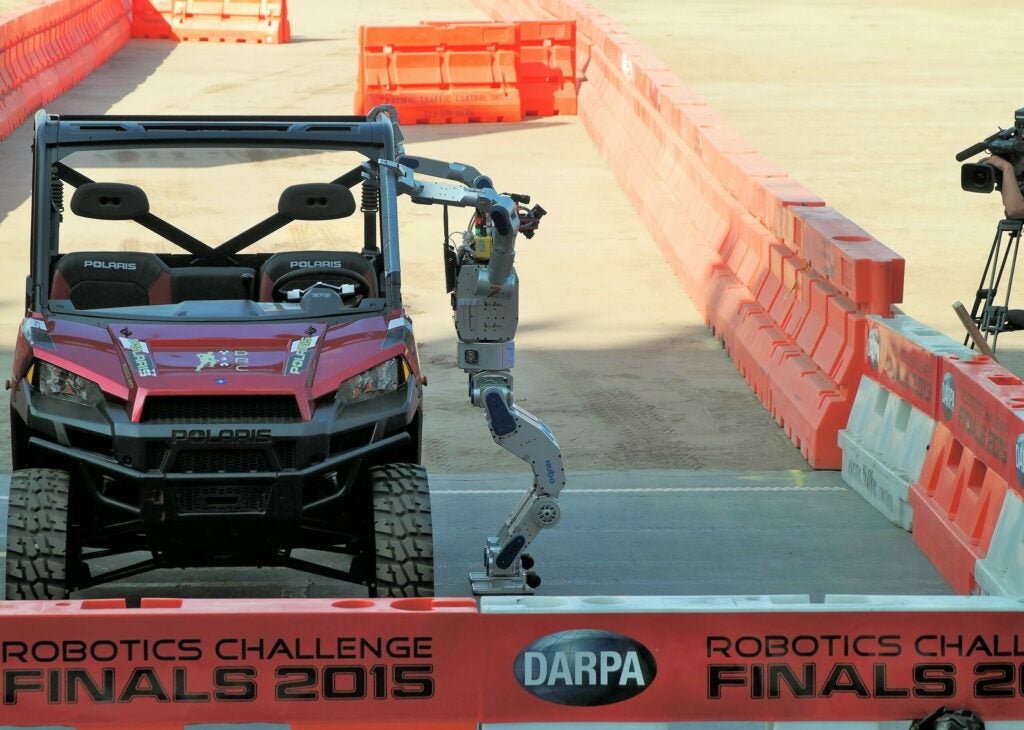 Every team that watched Team KAIST’s practice run had cause for concern. The five-foot-nine DRC-Hubo reportedly finished the entire course in 30 minutes, nearly a half-hour faster than CHIMP, and with a higher score than any of its fellow, walking humanoids, none of whom even tried to complete all eight tasks during practice. DRC-Hubo’s flashiest move was its egress, a task that took most robots minutes to complete, and sent some crashing to the concrete. Team KAIST’s bot dismounted with apparent ease, grabbing the vehicle’s roll cage with both manipulators to help stabilize itself. The robot ran into trouble in its first run, completing only 7 tasks, but its performance on Saturday put it ahead of both CMU and IHMC. 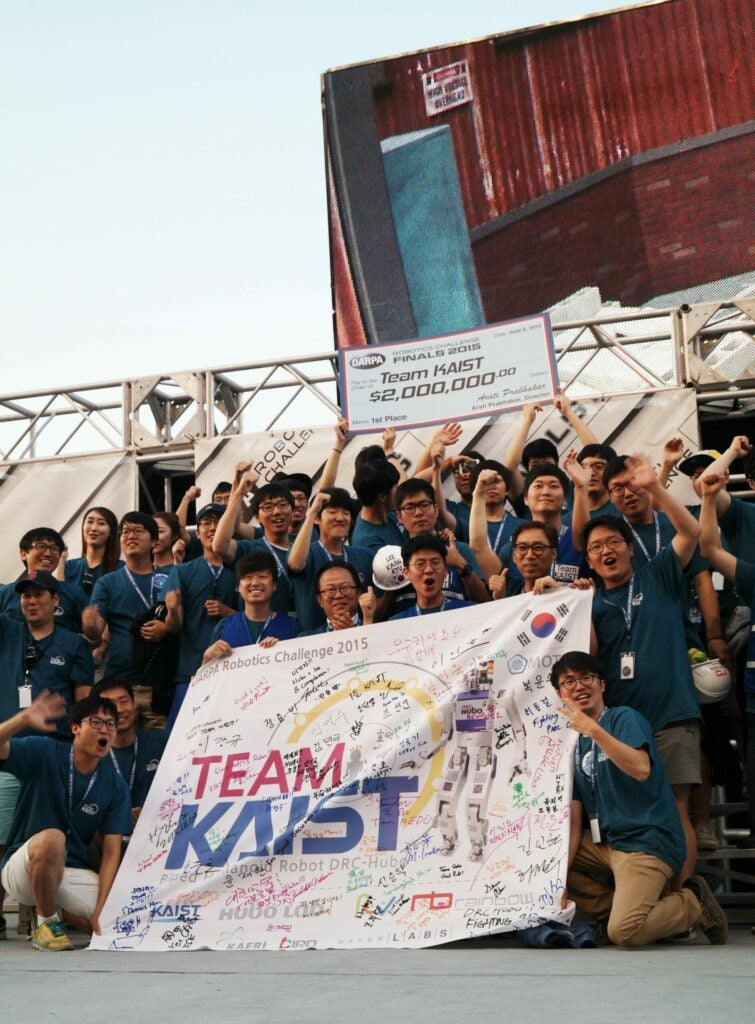 There’s no single aspect of South Korea’s Team KAIST, or its DRC-Hubo, that won the day at the DRC. The powerful, air-cooled electric motors in the robot’s legs helped it transition seamlessly from a standing position to its eerie reversed knee, and the decision to change the standard Hubo from a purely walking machine to one that can roll on knee-and-foot-mounted wheels was a breakthrough for the humanoid design philosophy. What’s clear is that KAIST’s win was no fluke. According to team leader JunHo Oh, even the robot’s winning run was one of its worst days, since it had consistently finished in less than 30 minutes during rehearsals back at the university in Daejeon, and during its practice run on Thursday. DRC-Hubo’s first place run, which came in at 44 minutes and 28 seconds, wasn’t as nail-biting as CHIMP’s, or as dramatic as the many runs that ended or were punctuated by a sudden loss of balance. DRC-Hubo stayed on its wheeled knees whenever possible, and delivered a performance that might have been boring to watch, but was brilliant enough to win $2M, and top honors at the biggest robotics competition in years.
darpa
DRC
robotics
robots
Technology