Bots battle to prove their disaster response worthiness, and not fall down 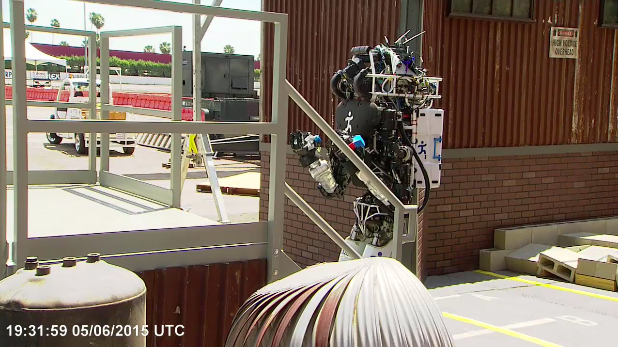 It’s not quite the robot gladiator deathmatch that has been foretold in numerous science fiction movies. Still, the DARPA Robotics Challenge Finals 2015 taking place right now (Fri. June 5th, 7 a.m. — Sat., June 6th, 5 p.m. Pacific time) in Pomona, California, is oddly fascinating and addictive to behold live, as you can do below via DARPA’s YouTube channel and DRC website.

The challenge, which began with a series of early trials all the way back in 2012 and is hosted by the Defense Advanced Research Projects Agency, reaches its epic conclusion this week by putting robots operated by 25 of the top science agencies and institutions from across the world through a series of realistic obstacle courses (made fittingly from scrap metal) designed to test the robots’ coordination, programming, and physical adaptability. The goal is to find a robot that can actually save lives during a disaster or emergency. Most importantly for the participating robots, some of which have eerily humanoid or animalistic designs, it’s to make it through the obstacle courses without getting stuck in sand or other tight areas, and without falling permanently down (as this poor robot did on Friday afternoon, while trying to twist a knob).

And with $2.5 million in prize money on the line, it’s fitting to see that the competition has been gameified: DARPA even has announcers interviewing the robots’ human operators and other scientist spectators. You can catch all the action live right now above or on the DARPA Robotics Challenge website, the latter of which allows you to switch between the four colored courses and a “main” view.

Although the action is often haltingly slow, it’s also oddly entrancing, especially thanks to the sincere color commentary from the DARPA announcers. In a way, it’s like the robot version of the Masters.

PopSci reporter Erik Sofge is live on the scene, and as he put it:

But is whatever else you had planned for this weekend really more interesting watching a bunch of expensive robots stumble around?