According to a source who has participated in the Pentagon-funded DARPA Robotics Challenge (DRC), Google is pulling its team from... 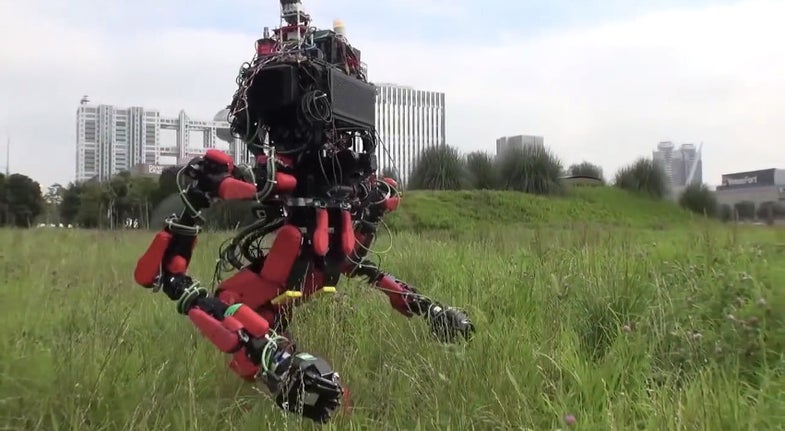 According to a source who has participated in the Pentagon-funded DARPA Robotics Challenge (DRC), Google is pulling its team from the competition.

If the rumor is true it would be a significant move on Google’s part, bolstering the company’s claims that it has no interest in seeking funding from the military.

The withdrawal might also quiet some of the anxiety that arose this past December, when the news first broke that Google was purchasing Boston Dynamics, a firm whose robots were funded primarily by the Pentagon. Google, it could be junior-sleuthed, was getting into military robotics. The search giant’s own assurances, that it wasn’t interested in being a military contractor, were deftly ignored by professional hand-wringers. The Guardian wrote that, along with gaining “world-leading robotics capability,” the acquisition added “significant links to the US military…” And while journalists trotted out the standard array of Terminator references, the Boston Dynamics deal inspired media theorist Douglas Rushkoff to note that, “some of Google’s recent forays are waking people up to the fact that evil is in the eyes of the beholder.” (The rhetorical bait-and-hook title of his CNN column: “Is Google redefining “don’t be evil’?”)

The purchase also meant that Google had fully bought its way into the DRC, arguably the most ambitious robotics competition to date, with teams from around the world developing bots that can function as first responders. In the physical trials that punctuate the multi-year competition, machines—most of them two-legged humanoids—are scored on their ability to cross uneven terrain, drive a vehicle, use power tools, and accomplish other tasks relevant to disaster response. In the weeks leading up to the DRC’s first trials (a qualifying event this past December, with the finals planned for December 2014), Google had already dominated coverage of the event. It’s acquisition of Tokyo-based SCHAFT Inc., one of the companies in competition, meant that Google had an official horse in the race. But Boston Dynamics played an even more crucial role in the DRC, having been contracted to provide various teams with its humanoid Atlas robot. Google was now both a competitor and contractor in the highest-profile robot showdown since the last DARPA Challenge, a driverless car race held in 2007.

SCHAFT and its S-One humanoid wound up placing first in last month’s trial, qualifying for $1M in additional funding from DARPA, and becoming the clear frontrunner for the $2M top prize in the finals later this year. Google has what appears to be the best-performing team in the competition. And now, it seems, that team is bowing out.

Though our source isn’t privy to Google’s decision-making, the stated reason for the withdrawal of SCHAFT was straightforward: Google does not want additional military funds. After all, continued participation in the competition would mean receiving funding (and, potentially, winnings) from the Pentagon.

Google declined to comment on what it referred to as “rumor and speculation.” But the company did confirm that it is not pursuing new military contracts.

And really, why would Google court the defense industry? “That just doesn’t represent nearly a big enough market to interest Google,” says Brian Gerkey, CEO of the Open Source Robotics Foundation, which was contracted by DARPA to provide robotic simulation software for the DRC. “Even the companies these days that are selling robots to the Defense Department are looking for other markets to sell robots to. You only ever need so many military robots in the world, and the size of that market pales in comparison to the consumer market.” iRobot, for example, has delivered some 5000 bots to the US armed forces, more than any other single company. And yet, iRobot has also sold roughly 8 million Roombas, and its profits are now based largely on its various domestic robots, which accounted for 82 percent of the company’s revenue in 2012 (up from 60 percent in 2011). “Philosophy and ethics aside, that’s why [Google] wouldn’t even bother. You can get higher margins on the military side, but you’re just not going to do the volume,” says Gerkey.

Since Google has committed to honoring existing robotics contracts, including Boston Dynamics’ $10.8M deal to build and maintain Atlas robots for the DRC (four of which are guaranteed a spot in the finals), its presence will still be felt at the competition. And, of course, anything is possible between now and the expected announcement from DARPA, such as Team SCHAFT simply surrendering its funded position, and joining the ranks of comparatively scrappy, self-funded bots in the finals. But if Google is serious about putting its new lab to work on some sort of robotic moon shot, then SCHAFT’s engineers might be too busy to regret the more immediate shot at glory they passed up.