Scientists' current understanding of stars says these stars shouldn't vary in brightness, but they do. 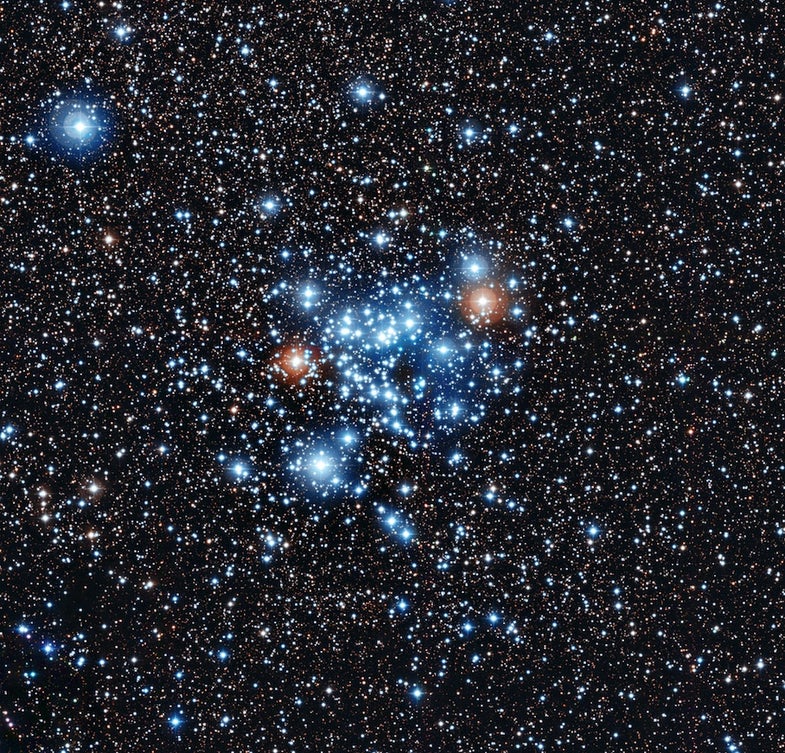 Astronomers have discovered a new type of pulsing star. There are 36 of the new type, located in a cluster about 7,000 light-years away from Earth.

Based on their brightness and temperature, they aren’t expected to pulse, but they do. Their brightness varies just 0.1 percent in intensity at regular times, in cycles ranging from two hours to 20 hours. Their discoverers, four astronomers from the Geneva Observatory in Switzerland, will now work to learn more about these stars’ strange behavior, team member Sophie Saesen said.

In general, astronomers classify stars by their temperature and intrinsic brightness. Each star can get an alphanumeric class this way. The Earth’s sun, for example, is a G2V. One way to visualize all these stars is to plot them out on a graph, called a Hertzsprung-Russell diagram, with temperature on one axis and intrinsic brightness on another. When you do that, it turns out that four regions on the graph–four combinations of temperatures and brightness–tend to have a lot of pulsating stars. Saesen and her team’s findings suggest another combination of temperature and brightness where there are pulsating stars.

Saesen and her colleagues made their observations using the Leonhard Euler Telescope in Chile over seven years. Getting observations over such a long period of time helped them with their discovery, the team’s leader, Nami Mowlavi, said in a statement. The Leonhard Euler Telescope’s smaller size probably helped in its own way, too, Mowlavi said. Other telescopes housed in the La Silla Observatory in Chile are larger and more popular, so Mowlavi’s team got more time on the Euler scope than they might have on other instruments.

All of the new pulsing stars appear in star cluster NGC 3766, which includes 3,000 stars estimated to be 20 million years old. The Swiss astronomers hope others will look for more of the same type of the star in other young, open star clusters, they wrote in a paper published in the journal Astronomy & Astrophysics.

The new star type doesn’t yet have a name, nor are astronomers sure why it pulses. Pulsing in other star types has to do with the properties of their interiors. All of the new pulsing stars spin very quickly, which should affect their internal properties, but the discovering team hasn’t yet been able to calculate exactly how that works, Mowlavi said.