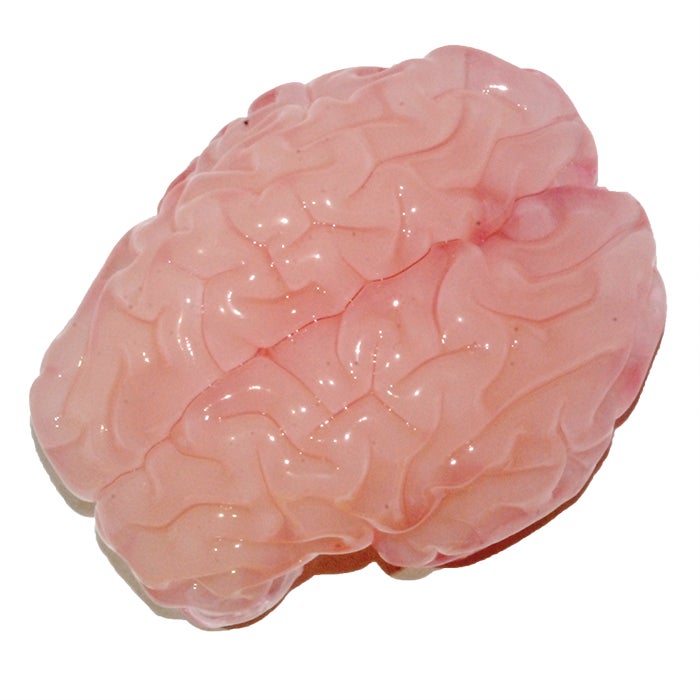 Scientists used this 3D-model of a fetus' developing brain to show how our brain develops its weird folds. Mahadevan Lab/Harvard SEAS
SHARE

The human brain is known for its signature folds, which curve in and out in a convoluted pattern. This folding enables us to stuff our rather large brains inside our skulls and reduces the distance between the neurons and circuits that transmit information within the brain. But until now, how this folding happens hasn’t been easily explained. Now, using a 3D-printed gel model of a fetal brain, a group of researchers showed that simple physical forces cause the brain to pull and fold into its signature roadmap-like curves. Their work was published this week in the journal, Nature Physics.

Back in 1975, scientists surmised that our brains formed this way not because of biochemical reactions–another theory–but simply by the laws of physics. At the time though, they couldn’t figure out a proper experiment to prove their theory. Now a group of researchers came up with a fun experiment to demonstrate the forces at work.

First, they created a 3D-printed gel model of a developing fetus’s smooth brain, before the folding happened. The model consisted of two gel layers; an inner layer to mimic the white matter and then an outer elastomer gel to coat the inner layer, acting as the outer cortical grey matter. Together, the two layers mimic brain growth. After they placed the model in the solution, the fetal gel brain quickly formed into the characteristic folds, just as the researchers suspected. As the different layers of gel expanded, even slightly, they generated compression forces that forced the outer layer to draw back.

The researchers also created a computer simulation of the forces at work. They write that this is likely what is going on in the brain as well. As the brain’s cortex–the outer layer of the cerebellum–starts to expand, it comes under significant pressure. This pressure makes the brain mechanically unstable and forces the outer layer to fold, generating the creases.

This theory could help us to better understand not only brain development, the researchers say, but also how it can go wrong and lead to certain types of brain disorders. “Brains are not exactly the same from one human to another, but we should all have the same major folds in order to be healthy,” says Jun Young Chung, an engineering professor at Harvard and co-author of the paper, in a press release. “Our research shows that if a part of the brain does not grow properly, or if the global geometry is disrupted, we may not have the major folds in the right place, which may cause dysfunction in the brain. “