Nuclear testing in the 1950s spawned some strange, pop culture spinoffs ranging from atomic patterned dishes to atomic-inspired lamps and... 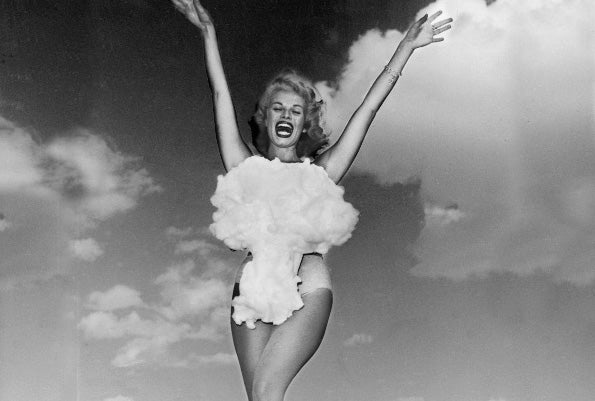 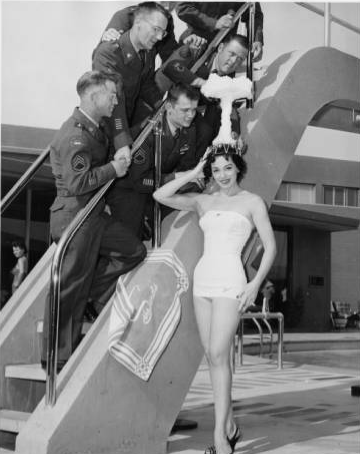 Nuclear testing in the 1950s spawned some strange, pop culture spinoffs ranging from atomic patterned dishes to atomic-inspired lamps and end tables. But by far one of the stranger spinoffs might be the handful of Vegas showgirls who were crowned, however informally, as atomic pinup girls coincident with some of the more controversial atomic testing programs.

Continental atomic testing was a byproduct of the Cold War. The escalating conflict that threatened to turn hot on a dime brought with it the need to not only test new weapon designs and define civil defense, but to understand just what damage nuclear weapons could do. One nuclear test program began in 1951 at the Nevada Proving Grounds. This 1,375-square-mile site is near the Nellis Air Force Gunnery and Bombing Range in Nye County, about sixty-five miles northwest of Las Vegas. So when the big detonation tests started it wasn’t hard for people in the nearby tourist city to figure out something big was going on in the desert. At first, it was only locals who saw the blasts, but before long the nation had a front row seat; beginning in 1952 the tests were broadcast on live television in an attempt to allay public fears.

The atomic bomb tests eventually began attracting tourists to the Las Vegas area, but they nevertheless remained second to the showgirls of the Strip. It wasn’t long before these two local attractions were brought together.

The first atomic pinup girl appeared in the May 9, 1952, edition of the Dixon, Illinois Evening Telegraph as well as the Statesville, North Carolina Daily Record. Las Vegas dancer Candyce King was photographed as the reigning Miss Atomic Blast over a caption proclaiming that she radiated “loveliness instead of deadly atomic particles.” The U.S. Marines who took it upon themselves to crown her, the newspapers said, found King rather awe-inspiring, albeit in a different way, than the blasts they worked with in the desert.

Las Vegas got its second atomic beauty queen the following year. The annual North Las Vegas’ annual beauty contest in 1953 coincided with the Upshot-Knothole series of atmospheric atomic bomb tests, and the pageant winner, Miss Paula Harris, rode on the Las Vegas’ Chamber of Commerce float in a motion picture-themed parade. Her float, depicting the the film “The Atomic City,” earned her the nickname of Miss A-Bomb.

In 1955, the Atomic Energy Commission and the Federal Civil Defense Administration embarked on a joint program to measure how houses, household items, food, shelters, metal buildings, equipment, and mannequins wearing everyday clothing would fare in a nuclear blast. The test called Operation Cue, which was part of the larger Operation Teapot, was plagued by weather delays; strong winds forced a series of holds earned the program the mocking nickname of “Operation Mis-Cue.” During once such delay on May 1, 1955, six discouraged U.S. Army Cue personnel went to Las Vegas where they found showgirl Linda Lawson and crowned Miss-Cue.

The last atomic pinup girl was crowned on May 24, 1957 to coincide with Operation Plumbbob, a controversial program to study the effects of nuclear explosions on structures, people, and animals. The Las Vegas News Bureau released a photograph of Copa showgirl Lee A. Merlin from the Sands Hotel with a cotton mushroom cloud attached to her her swim suit. She was the last, and remains arguably the most famous, Miss Atomic Bomb. (And a really easy Halloween costume!) Between 1951 and 1992, nine hundred and twenty-eight documented atmospheric and underground nuclear tests were done at the Nevada Test Site. The Atomic Testing Museum in Las Vegas has an amazing collection of images and videos from all these 1950s testing. It’s well worth a day away from the casinos to check it out.