Researchers are using tomato peels and eggshells to make tires 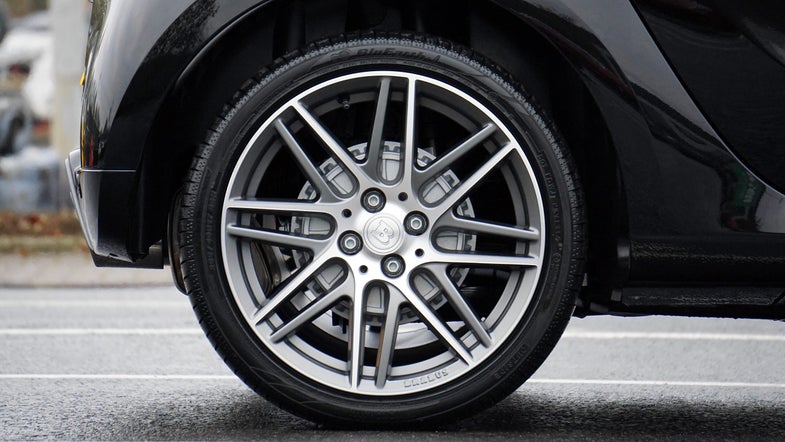 Some day you may discover tomato peels and eggshells where the rubber meets the road.

The environment — not to mention your tires — will be better for it.

Researchers at The Ohio State University have discovered that food waste, specifically tomato peels and eggshells, makes excellent filler for rubber tires, with tests showing they exceed industrial standards for performance. Filler is combined with rubber to make the rubber composite used in tires. Food waste could partially replace carbon black, the petroleum-based filler long used in tire manufacturing, which has become increasingly hard to come by.

This approach to manufacturing more environmentally-friendly materials complements ongoing efforts to develop sources of clean fuel. Using tomato peels and egg shells as tire filler could help reduce the nation’s dependence on foreign oil, keep food waste out of landfills and make the production of rubber items — especially tires — more sustainable, according to Katrina Cornish, who holds an endowed chair in biomaterials at Ohio State University.

“If we hit a real shortfall in carbon black, we’ll have to use something else,” Cornish says. “You could use some nice eggshells. Many companies would like to have a green position, and this is a good way to do that.”

Food accounts for around one-fifth of the waste sent to landfills, according to the Environmental Protection Agency. Finding ways to keep food waste out of landfills not only saves space, but also helps in the fight against climate change. Bacteria turn food and yard trimmings found in landfills into methane, a potent greenhouse gas.

When properly processed, food waste can be used to generate energy, enrich the soil as a fertilizer, or serve as a food source for animals. Now, it also could prove valuable in tire manufacturing.

Cornish has long been interested in developing new sources of rubber, as well as ways to enhance rubber products. So, when she came to Ohio State in 2010, she looked to food waste as a potential tire filler.

“I wrote to every food processor in the state, and said: ‘if you’ve got waste, we’d like to look at it,’” she says. “We received 35 different types of waste: batter drippings, sauerkraut juice, milk dust powder, among them — and eggshells and tomato peels. I’d always wanted to look at tomato peels because I spent a lot of time in California and would see all those produce trucks loaded with tomatoes, and knew they had to have thick, tough skins so the ones on top didn’t squash the ones on the bottom.”

Initially, Cornish had doubts as to how well eggshells would work. Eggshells are composed largely of calcium carbonate, which is used as an extender, rather than a reinforcer. The latter is more useful as tire filler. But Cornish discovered to her delight that her doubts were misplaced. Eggshells have a porous architecture that provides a larger surface area for contact with the rubber, and proved to be reinforcing.

“We were very excited,” she says. “It added considerably more value than expected.” They also found that tomato peels are very stable at high temperatures, and can generate material that performs well.

It also turned the rubber reddish brown — depending on the amount of eggshell or tomato in it — rather than the black appearance that results from using carbon black. About 30 percent of a typical automobile tire is made of carbon black, the cost of which varies with petroleum prices. American companies most often purchase carbon black from foreign sources, according to Cornish.

“The tire industry is growing very quickly and we don’t just need more natural rubber. We need more filler too,” Cornish says. “The number of tires being produced worldwide is going up all the time, so countries are using all the carbon black they can make. There’s no longer a surplus…”

Cornish and her colleagues’ research on potential tire fillers has appeared in the Journal of Polymers and the Environment and elsewhere.

The U.S. produces around 80 billion eggs annually, according to the United Egg Producers. Cornish says that commercial food factories crack open half of them, then pay to send the remains to a landfill, where the mineral-loaded shells do not break down. “Nothing much happens to them in a landfill, since there are no calcium-eating animals,” she says. “They are mostly rock.”

The U.S. grows around 15 million tons of the ever-popular tomato, according to the Department of Agriculture. Most of that is canned or in processed products. When food companies make tomato sauce, for example, they peel and discard the skin, which is difficult to digest, she says.

Cornish is concerned about deforestation that results from planting new rubber trees, and she has been researching rubber alternatives, including the rubber dandelion. While they are unmistakably dandelions, they are not the same as what many homeowners regard as annoying lawn and garden intruders.

Cornish explained that their leaves are thicker and bluer, and the flowers are smaller. Most importantly, its taproot yields a milky fluid with natural rubber particles in it.

“The rubber dandelion comes from northwest China, Kazakhstan and Uzbekistan, but it can grow in snowy areas of Ohio,” she says. “But it is not very sturdy, so we are trying to make it stronger and higher yielding.” If successful, “it could grow as an annual crop, and it could create many processing jobs,” she adds.

Meanwhile, Ohio State has licensed Cornish’s technology for turning food waste into tire filler to her company, EnergyEne, for further development. Cornish stresses, however, that no one will start collecting “the eggshells from your breakfast,” she says. “Kitchen waste is not going to go this way. So keep on with your compost piles. In fact, maybe you can use them to grow rubber dandelions.”