Book Excerpt: The Ground Beneath Us 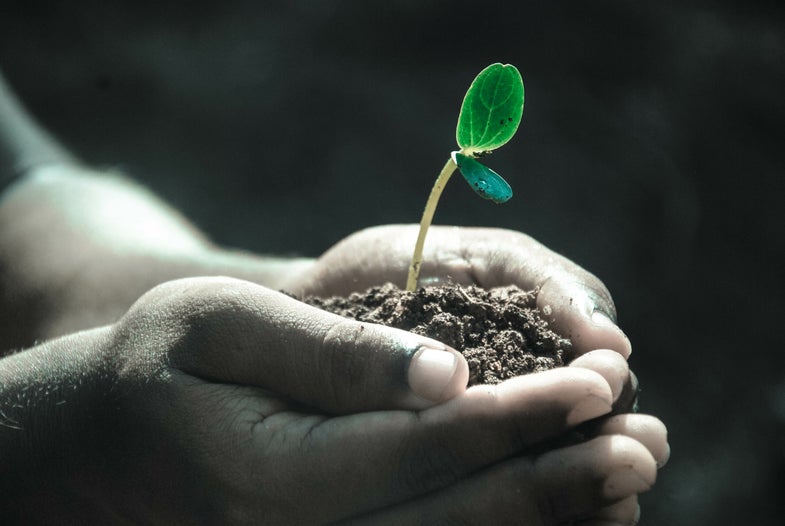 The following is an excerpt from The Ground Beneath Us by Paul Bogard.

It’s hard to believe that American society could possibly collapse because of a lack of soil. And it’s true that we in the States are blessed to live in a country so rich in this life-giving source. But in a small world growing smaller all the time, what happens to the soil in other parts of the world—often much more at risk than our soils—will eventually affect us and our economy, and the stability of the world around us.

For example, soil scientists fear that we are wasting and damaging our topsoil—the layer in which most of our food grows—at an entirely unsustainable rate.

How unsustainable? One recent study reported that on average the world has only sixty harvests remaining. “On average” because although in the United Kingdom that number is one hundred harvests and in the United States the number is even higher, for other parts of the world—think Africa, India, China, and parts of South America, where the human population is largest and growing ever larger—the number of remaining harvests is lower, meaning that in fewer than sixty years the topsoil will no longer support the growing and harvesting of food.

Two incompatible facts: at the very moment when we know that by 2050 we will need significantly more food, we are paving over some of our most fertile soil. Human settlements have traditionally taken root in fertile areas, and as these increasingly urban areas grow in human numbers, we are developing the ground and thus losing the best soils for growing food. In the United States, the amount of ground being lost to development is stunning—more than a million acres a year. As one result, whereas in 1980 the nation had an average of nearly two acres of cropland for each citizen, thirty years later and with ninety million people added, that number had fallen to 1.2 acres per American. “How an Exploding U.S. Population Is Devouring the Land that Feeds and Nourishes Us,” reports the subtitle of a study on sprawl. And once this ground is paved, there’s no going back. As one expert noted, “Asphalt is the land’s last crop.”

While soil sealing and sprawl are urban-focused impacts that many of us can see at our feet, other serious threats to soil take place far from sight. These are primarily threats created by agriculture, and especially industrial agriculture as practiced by Western countries and exported to developing lands. The main culprits? Intensive tilling and the overuse of synthetic fertilizers and pesticides. The resulting degradation of soils includes salinization, compaction, acidification, and the decline of organic matter. Around the world, experts say, about 40 percent of soil used for agriculture is already considered either degraded or seriously degraded, meaning that in this 40 percent at least 70 percent of the topsoil is gone. In total, in the past 150 years, half the topsoil on the planet has been lost. This means a lot less food for an already hungry—and ever-growing—human population.

“Under a business as usual scenario,” says John Crawford, an Australian sustainable agriculturist, “degraded soil will mean that we will produce thirty percent less food over the next twenty to fifty years. This is against a background of projected demand requiring us to grow fifty percent more food, as the population grows and wealthier people in countries like China and India eat more meat, which take more land to produce.”

The potential for human suffering and environmental catastrophe is enormous. Consider the East African country of Tanzania, home to a human population of some fifty million. Tanzania is also home to an elephant population already decimated from years of poaching. In just six years, from 2009 to 2015, the country saw more than half its hundred thousand elephants killed. What happens if, as projected, Tanzania’s human population doubles to more than one hundred million in the next twenty years, while at the same time the soil’s ability to produce crops diminishes? What happens to wildlife when millions of people don’t have enough to eat? And then what happens when the wildlife is gone? Similar scenarios for disaster exist all over Africa, and on other continents as well.

Even in considerably more stable situations such as in North America and Europe, we are not immune from the consequences produced by the continuing loss of soil and depleting of soil’s quality. For example, degraded soil means soil that contains fewer nutrients and grows food that is less nutritious. That’s why, as Crawford explains, modern wheat varieties have half the micronutrients of older strains, and the same is true for fruits and vegetables, many of which have lost a significant percentage—sometimes more than half—of their nutritional value just since 1950. “If it’s not in the soil,” he says, “it’s not in our food.”

All this might not matter so much if we could just find more soil, or just make soil ourselves. But for all practical purposes soil is a nonrenewable resource. The recipe for soil is incredibly complex, requiring an intricate mix of the right chemistry, biology, and physics. And it simply takes a long time to form. The rule of thumb? Between five hundred and several thousand years for an inch of topsoil.

Which brings us back to sustainability. What we need to be talking about, one soil expert told me, is, “Can we continue agriculture the way we’ve been doing it the past fifty years for the next two hundred years? The answer is almost certainly no.”

In fact, while there are many examples of how our way of life is unsustainable, our abuse of soil may rank as the worst. The British writer George Monbiot recently described our soil crisis this way:

The number of harvests we have left, whether it’s sixty or ninety or thirty, isn’t the point. The point is that if we do not change the way we farm and build, we will run out of soil. “Almost all other issues are superficial by comparison,” writes Monbiot. “What appear to be great crises are slight and evanescent when held up against the steady trickling away of our subsistence.”

Excerpted from The Ground Beneath Us, Copyright © 2017 by Paul Bogard. Used with permission of TKTK.  All rights reserved.