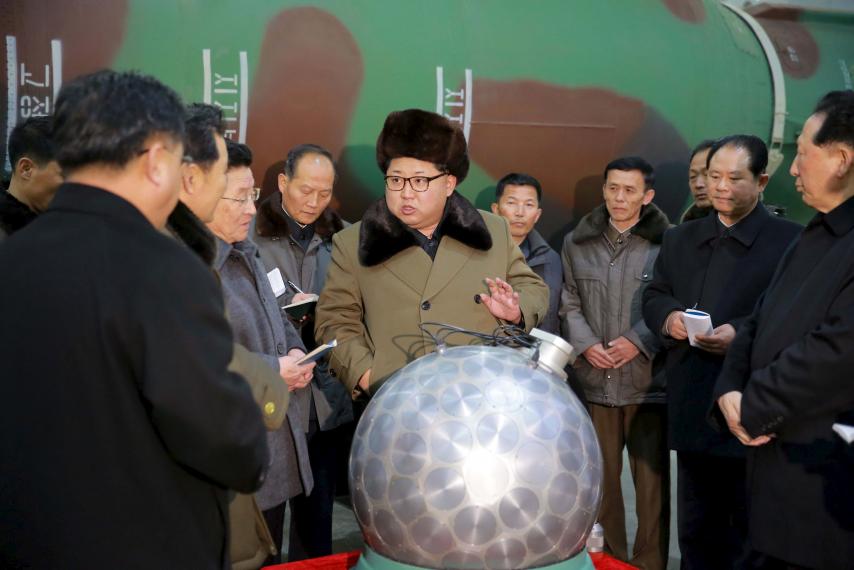 This is Kim Jong-un and friends with a maybe-nuke. Rodong Sinmun.
SHARE

The March 9th, 2016 front page of Rodong Sinmun, North Korea’s official state-run newspaper, features a glistening spherical nuclear weapon. It looks like a cartoon bomb. We know very little beyond that, though Pyongyang claims that it’s a miniaturized warhead, which is a necessary development if Kim Jong-un is going to have a weapon that can go on a ballistic missile. This would be a frightening development, if there were any guarantee that what Pyongyang says about the warhead is accurate.

There isn’t. Earlier this year, when North Korea tested a nuclear weapon, they claimed it was a thermonuclear device. Seismographic evidence instead suggests it was a modest improvement over earlier bombs, not a substantially deadlier device. February’s satellite launch by the hermit kingdom was underwhelming, putting a silent object haphazardly into orbit. Even when North Korea has a genuine success, like a modest improvement in submarine-launched missile technology, they bury that evidence in enough propaganda that it’s easy to miss.

This shiny spherical warhead is likely the same: a prop aimed at strategic significance. As Ankit Panda of The Diplomat notes:

In the meantime, feel free to photoshop the North Korean bomb-like thing into old cartoon, stills from Batman: The Dark Knight, and basically anywhere that needs a modern update on old bomb art.