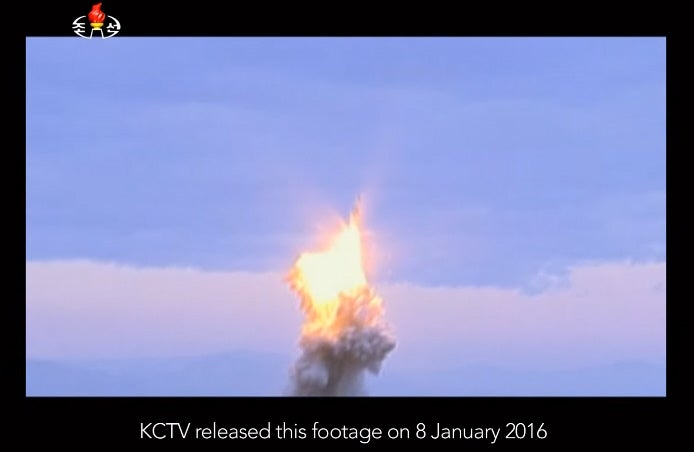 North Korea’s official releases lie so often it’s hard to notice when they publish a kernel of truth. Last week, the country claimed to have tested a hydrogen bomb, while analyses from around the world showed the impact to be instead that of a much weaker atomic bomb. Shortly after that atomic test, North Korea released an hour-long propaganda video boasting of their military success–including, remarkably, evidence of a new submarine-launched ballistic missile test. Thanks to editing and splicing, the footage gives the impression of a fully functional missile. North Korea doesn’t have that, but they are getting closer.

A team of analysts at the Center for Nonproliferation Studies in Monterey, California, pored over the hour-long video and isolated the few clips of the submarine missile launch. They found that out of almost an hour of footage, just 30 seconds showed the submarine-launched ballistic missile (SLBM). Of that, part of the footage is shown twice, the second time mirrored, and it appears to explode. The footage of that explosion is then cut short and leads directly into what looks like an entirely different weapon flying above the clouds.

Watch the analysts’ video below:

A post at Arms Control Wonk includes a frame-by-frame dissection of the failed North Korean launch. This is the second time North Korea has released footage of their submarine missile tests, and the first appears to instead show a submerged barge launching the missile, not an actual submarine.

We spoke to Catherine Dill, a research associate at the Center for Nonproliferation Studies, to understand what the latest launch means. “This test was interesting,” she told Popular Science, “in that it looks to have been both a success and a failure, in that the ejection was successful but the ignition/launch was a failure. The DPRK SLBM program is a real military program, and there appears to have been technical progress, but clearly development challenges remain.”

For propaganda, North Korea will exaggerate their success to the point of absurdity. There is no way that a missile which exploded shortly after launching later clears the clouds, so that’s easy to dismiss. Yet the missile itself looks like it cleared the submarine, something new and different from previous tests. Despite what his propaganda claims, North Korean dictator Kim Jong-un doesn’t have any revolutionary superweapons yet. Instead, he’s making incremental progress, and doing so in plain sight.