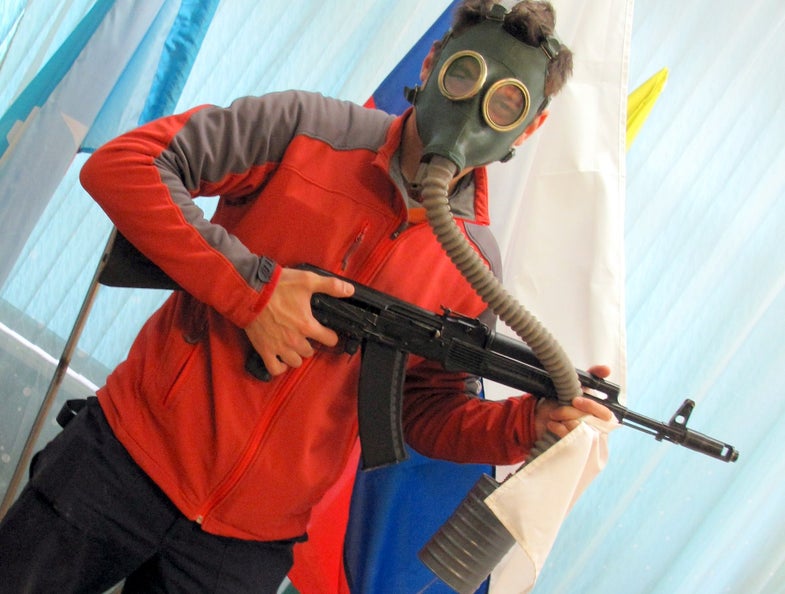 Note that his finger is one the trigger, even though this isn't a life-or-death situation. This is poor trigger discipline, and he could shoot someone's eye out like that. Peretz Partensky, via Wikimedia Commons CC BY-SA 2.0
SHARE

Daily life is a data-rich environment. After a crime, a natural place to look for evidence is the suspect’s social media accounts, to see if there are any useful nuggets buried among empty ephemeral nothings. Fortunately, there are tools for just this sort of thing. Last month, security researcher Justin Seitz explained how to make a software tool that can find guns in pictures. Yesterday, he released a how-to guide for feeding that same tool to social media posts.

First, the why: People post everything on social media. Much of social media is, by its very nature, public and searchable. Which means that when people get new gifts, they’re often eager to share them online with their friends but also with complete strangers. On Christmas morning, 2015, Iraq war veteran Brandon Friedman started retweeting pictures of people showing poor trigger discipline. That is, pictures people post with their finger on the trigger, in situations that aren’t life-or-death. He attached the hashtag #GetYourFingerOffTheTrigger, and many of the tweets can still be found online. The main risk of putting a finger on the trigger is that the person may accidently fire the gun, which can lead pretty directly to horrific things.

With people posting the guns they opened as presents, it’s pretty easy to find, but that’s not always the case. If police officers have identified a suspect and want to know what kind of weapons that person might have, and they know that suspect’s Twitter handle, they could build a tool like Seitz outlined in his blog post, which would scoop up to 3,200 tweets, scan them for guns, and then save the photos in a folder for gun photos. That knowledge in hand, our hypothetical officers can now quickly skim a designated folder of photos, making sure they know what weapons the suspect could have on hand.

That’s a pretty neat trick, and because it’s open-source code, it’s hardly limited to just law enforcement. Intelligence officers trying to understand what weapons are showing up in a war could apply the same tool to Twitter accounts on the front lines in Syria or Ukraine. The amount of data in the world can be staggering, but with tools like this, they can help people avoid accidentally stumbling onto a gun in a haystack.