Not that soldiers on the North Korean side of the demilitarized zone can read this tale of Western decadence, but... 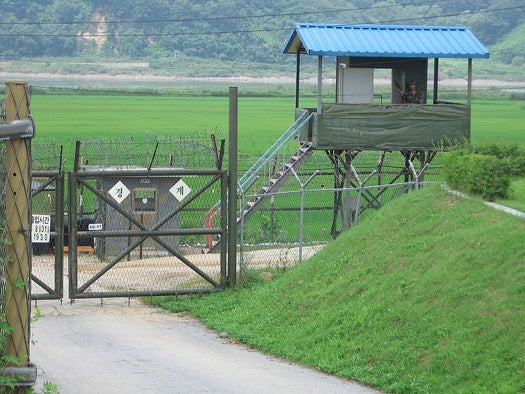 The South Korean side of the Korean peninsula may soon be littered with robot sentries armed not only with heat and motion sensors, but with automatic weapons and 40 millimeter grenade launchers. Johannes Barre, iGEL
SHARE

Not that soldiers on the North Korean side of the demilitarized zone can read this tale of Western decadence, but if they could they would do well to take note: South Korea has deployed two $334,000 robotic sentries armed with automatic weapons and 40-millimeter grenade launchers along the tense border region bisecting the Korean peninsula.

The robots are fitted with surveillance equipment, tracking and voice recognition systems, and heat and motion detectors that can identify threats approaching from the other side. If they prove successful they could be deployed along the entire DMZ, augmenting South Korea’s strong military presence already in place.

Upon sensing a threat, the robots alert a command center where a human operator uses the ‘bot’s audio and visual detectors to try to identify the nature of the threat. The operator can then give the robot the order to either stand down or unleash its arsenal.

Pyongyang, as you may have heard, is quite proud of its military image and maintains a standing army of more than a million soldiers, whereas South Korea has a force of just 655,000. As such, South Korea plans to bring more robots into its arsenal in coming years, including robots armed with sophisticated sensors and weapons that could bolster its numbers on the battlefield.