An incremental increase in power 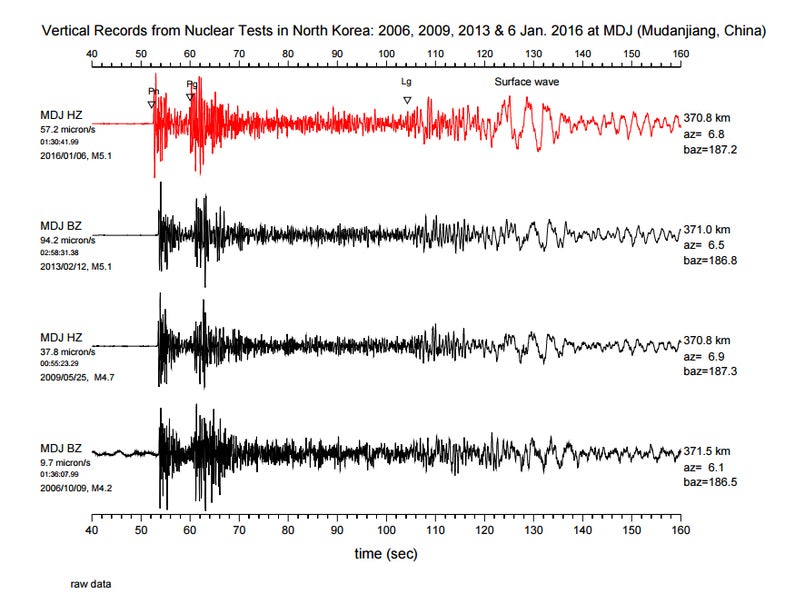 North Korea tested a nuclear weapon last night, and did so with traditional bombast. Their English-language newswire wrote “Through the test conducted with indigenous wisdom, technology and efforts the DPRK fully proved that the technological specifications of the newly developed H-bomb for the purpose of the test were accurate and scientifically verified the power of smaller H-bomb.” Scientists outside of North Korea remain deeply skeptical that this was, in fact, a successful hydrogen bomb test, but there is clear evidence that North Korea is at least making larger explosions than their first weapon.

When North Korea tested their second nuclear device in 2009, Seismologists Paul Richards and Won-Young Kim from the Earth Institute of Columbia University compared the readings with data from North Korea’s first nuclear test, in 2006. The Earth Institute wrote at the time:

For this latest test, Won-Young Kim says “Based on a standard formula between body-wave magnitude and yield (on hard rock site and fully coupled explosion), it would be about 3.35 kilotons.” North Korea’s first atomic weapon, tested in 2006, was no more powerful than 1 kiloton. Their second, in 2009, was around 2.4 kilotons. The previous test in 2013 is widely estimated to be between 6 and 7 kilotons. This latest plast registered the same on a richter scale as the 2013 explosion, meaning it is unlikely to have been substantially more powerful. While it takes time to precisely figure out just how powerful the explosion was, hydrogen bombs are orders of magnitude more powerful than atomic bombs.

The first American hydrogen bomb was 500 times more powerful than the first American atomic bomb, and the first deployable Soviet hydrogen bomb was over 72 times more powerful than their first atomic weapon. North Korea appears to be capable of making bigger bombers, but from what we know of the blasts so far, they are just incrementally bigger, not revolutionary advances in weapons technology.

Update: An earlier version of this article used an image comparing seismograms of earlier North Korean tests to an earthquake. That image has since been updated, and corrections made to the text.