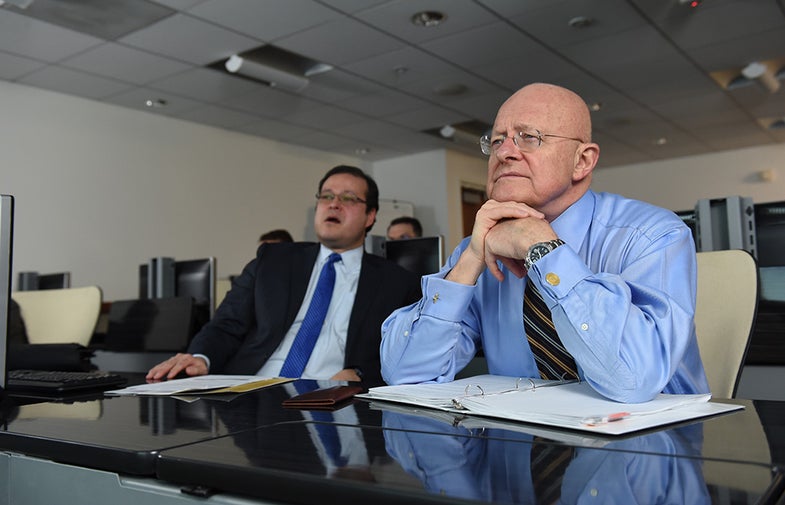 “I am with [Neil deGrasse Tyson] on this one,” Director of National Intelligence James Clapper typed, in response to Tumblr user BaeForHire, who asked if the Earth was flat. “Definitely a sphere.The Intelligence Community has high confidence. We take pictures of it every day,” Clapper continued, in a tone as breezy as the forum he was in. Participating in Tumblr’s Answer Time, Clapper’s answers drifted between light-hearted certainty and cagey push-back.

Clapper answered questions about the definition of “intelligence community“, his favorite part of the job, and his daily routine. He got asked a lot of questions about aliens, and pointed readers to a CIA explanation of the X-Files, which probably only deepens the conspiracy. Asked about a different James, Clapper said the current Bond is his favorite, and provided both Goldfinger and Skyfall as his favorite films in the long-running franchise.

But there were a few more substantive questions. Tumblr user mariokart64ost mentioned he was uncomfortable with secret courts, and asked what reforms for transparency Clapper would bring into being if given the chance. Clapper’s answer focused on the Foreign Intelligence Surveillance Act court, and hinged on a technicality. FISA “is not secret in the sense that its existence is denied,” Clapper wrote, and continued:

By design, a court that decides cases on sensitive information with classified material can’t be and isn’t transparent, which makes it a lot harder to enforce compliance with its own rules, since no one outside the community can even tell if they’re being violated. The FISA court is a regular target of calls for reform from privacy advocates.

Clapper was also asked about a moment on March 12, 2013, when Senator Ron Wyden of Oregon asked Clapper if the NSA collected information on Americans. At the time, Clapper responded with both “No, sir,” and “not wittingly.” These answers were thrust into a new light following the June 2013 revelations from former NSA contractor Edward Snowden that the agency was, in fact, collection information on American citizens. In light of this, was what Clapper said back in March a lie?

Politifact has a thorough accounting of this fight, with Clapper insisting that he didn’t lie, he just misspoke, and Wyden unsatisfied with that explanation. Yesterday, asked on Tumblr if he had lied before Congress, Clapper had another opportunity to explain his answer. His response is worth quoting at length:

That’s the fundamental tension of an intelligence service in a democracy, especially one that publicly commits to transparency yet regards many matters as too secret for people to safely know. It’s a big question to answer, so it’s understandable that Clapper spent the rest of his session answering questions like this, from an anonymous user.

Anon: hey, heard you weren’t caught in that big east coast storm!! congrats, was great to hear you didn’t get snowed in

Clapper: I see what you did there.