The Flyprint sneakers are built to ditch water and increase airflow for long runs. 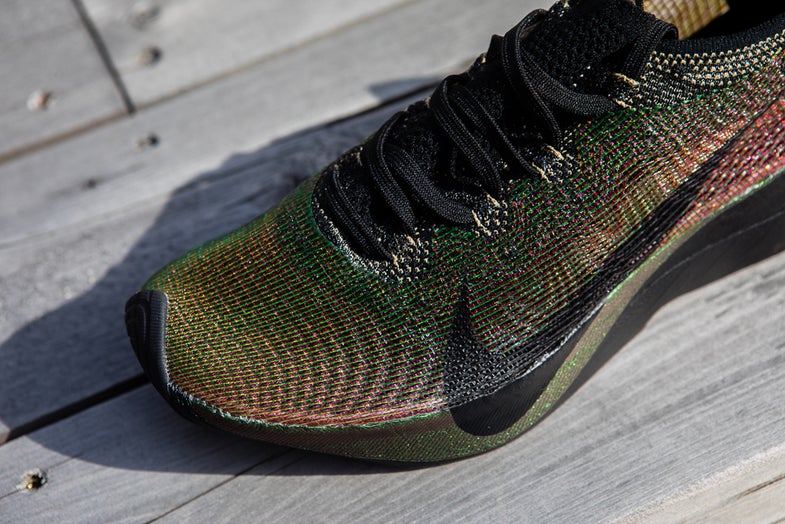 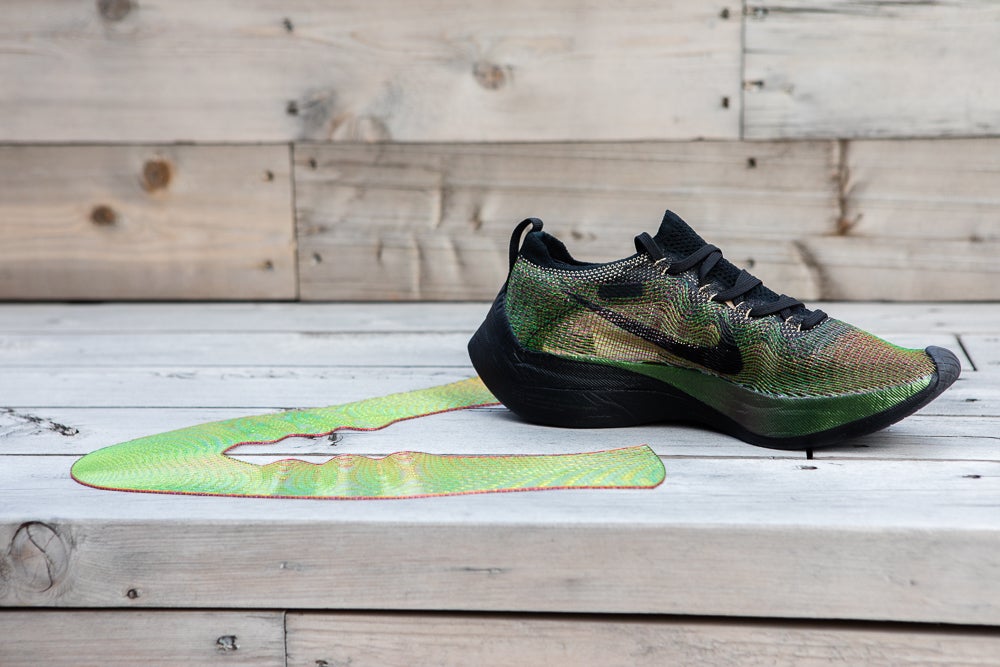 The Nike Flyprint sneaker has an upper that’s made using a 3D printer.

When we talk about sneaker technology, the focus typically lands on the soles of the shoes. It’s where sneaker companies go to great lengths to protect the delicate bones in your feet and propel you along with bouncy materials. It’s also where they tend to use 3D printing tech. The Adidas FutureCraft uses a 3D printed sole, and the Under Armour Futurist has a midsole made of 3D printed lattice. Nike’s new Flyprint sneaker, however, puts the focus on the upper, for which it’s using a 3D printer to build an intricate web that replaces typical textiles.

Nike is debuting the new Zoom Vaporfly Elite Flyprint sneaker on the feet of marathon record holder, Eliud Kipchoge. who was the key athlete in last year’s attempt to run a full marathon in less than two hours. He clocked in at 2:00:25, down from his previous best of 2:03:05.

The sneaker Kipchoge wore for that attempt was the Zoom Vaporfly Elite 4% and its new sole, which had reduced weight and a carbon fiber plate in the midsole to increase the amount of spring he’d get with each step. But, at elite times like this, even small details can lead to big shifts in pace, especially when the elements come into play. Reducing weight is important, but it’s not the only important factor. 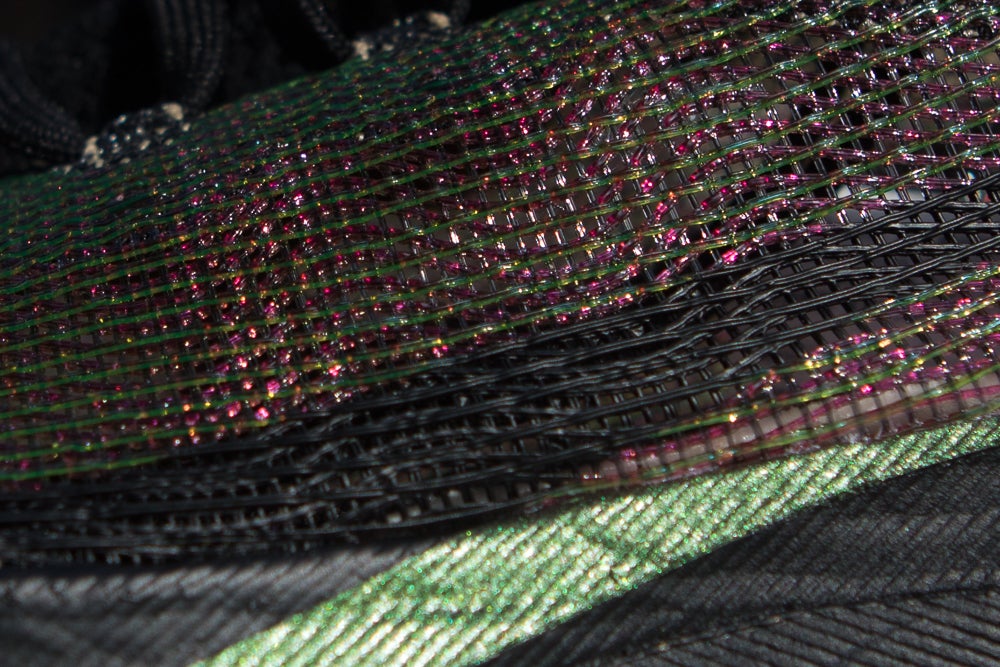 When you zoom in close, you can see the meshy structure of the material.

According to Nike, the inspiration for Flyprint came after a particularly wet Berlin marathon. “The rain was coming down and it was 100 percent humidity,” says Roger Chen, Nike’s senior director of digital innovation. “The shoe was absorbing all the water.” Wet shoes are uncomfortable and heavy. So, Nike’s solution was to employ a new material that wouldn’t absorb the moisture and built a foot cage with lots of room for water to escape.

The Flyprint process uses a composite made of thermoplastic urethane plastic (TPU). Nike won’t disclose the specific blend it uses for Flyprint, but the resulting fabric is extremely flexible, unlike some harder versions of TPU which is sometimes found in the outsoles of sneakers. Right out of the box, the Flyprint upper is 11 grams—or six percent—lighter than the original Zoom Vaporfly Elite, which had an upper made of Flyknit. That doesn’t sound like much, but grams add up over the course of a marathon.

Nike says Flyprint cuts down on moisture retention in two ways. The first is that TPU doesn’t absorb water, because it’s plastic. “From the start of the race to the finish, if it’s wet, your shoe is going to be heavier,” says Brett Holts, Nike’s vice president of running footwear. “You could run that same [Berlin] race in the same conditions, and it will weigh the same at the end.” This swatch makes up most of the Flyprint’s upper.

At the same time, the structure of the shoe’s upper itself allows water to easily exit the shoe. To look at it from the side, the Flyprint sneaker has a surprising number of tiny holes within the mesh of the material. So, while it lets water in, it also gives it lots of room to escape. “Everyone still wears socks during a marathon,” says Chen. “The water can wick out and the pressure from your foot during a run will push the water out.”

Look closely at the structure of the material and you’ll notice a few distinct patterns within the textile. The front of the shoe uses a typical lattice shape, while the sides of the shoe have a wave-like structure. According to Chen, this adds stiffness for support, but more importantly, it also increases ventilation.

“We have control over every single line,” says Chen. “If someone says, ‘hey, it’s too loose in the toe box,’ then I can go and add some additional lines without having to redraw the whole thing.” The sneakers exist as digital models and each strand of filament can move independently. Designers can add or take away material in different spots and algorithms will inform them on how it might affect performance. Then athlete testing paints the rest of the picture. 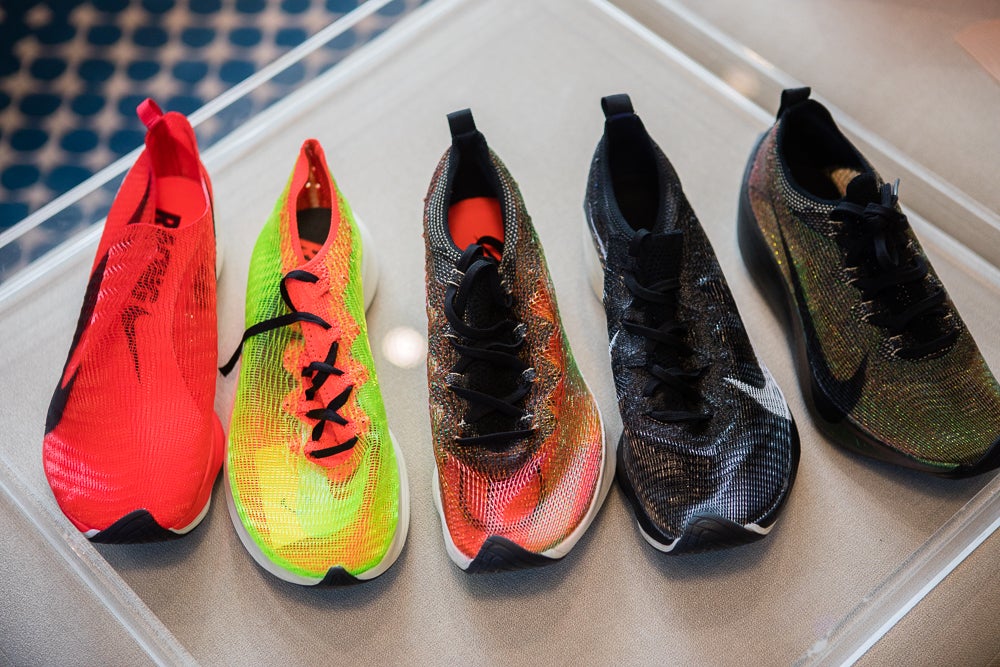 A chronological look at the Flyprint prototypes.

This tech also helps sneakers scale in size without affecting the fit. If you start with a size 10 Flyprint sneaker and simply scale it down to a size 6, the weave is too tight on the sides and the shoe is too stiff. If you were to scale it up to a size 16, the relatively open structure on the sides would leave almost no material and suffer in terms of support. With this Flyprint program, however, algorithms help decide how to maintain performance as it scales.

Only 100 consumers have a shot at the first run of commercially available Flyprint shoes when the launch at the London marathon on April 22nd (and each pair will cost $600), but Nike sees this as a stepping stone on the path to fast, totally custom sneakers. 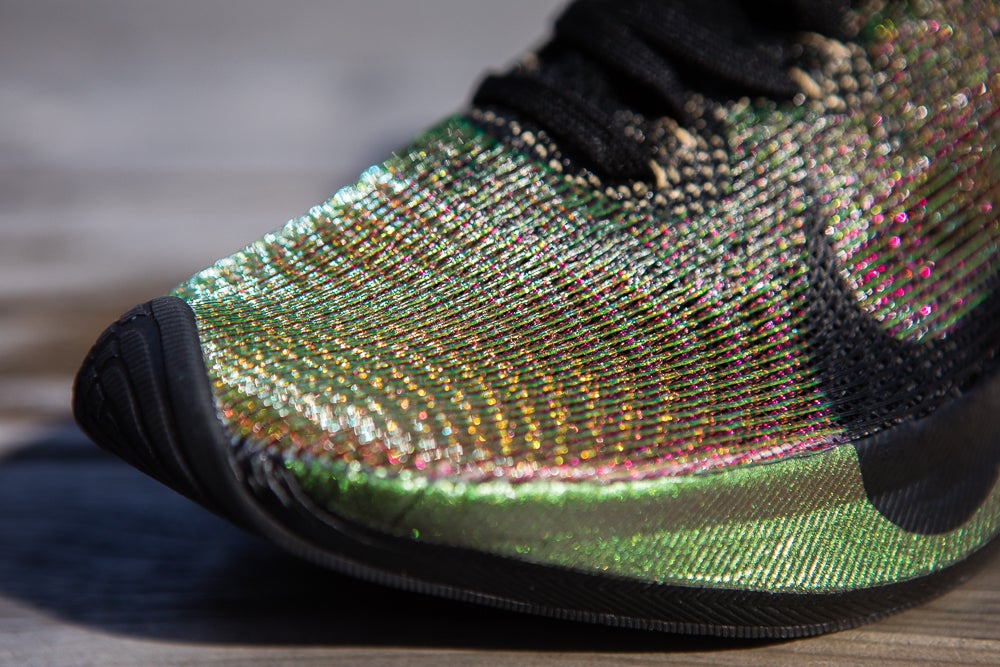 The toe of the Flyprint sneakers has a tighter mesh structure than the sides, which use a curved shape.

Right now, the Flyprint sneaker also integrates some of Nike’s typical material on the top of the foot because it’s softer and more forgiving over the course of a long run. But, Holts says it’s possible that Nike will one day totally 3D print uppers on demand. Maybe users could even carbo load with a burrito while they watch their new sneakers print.