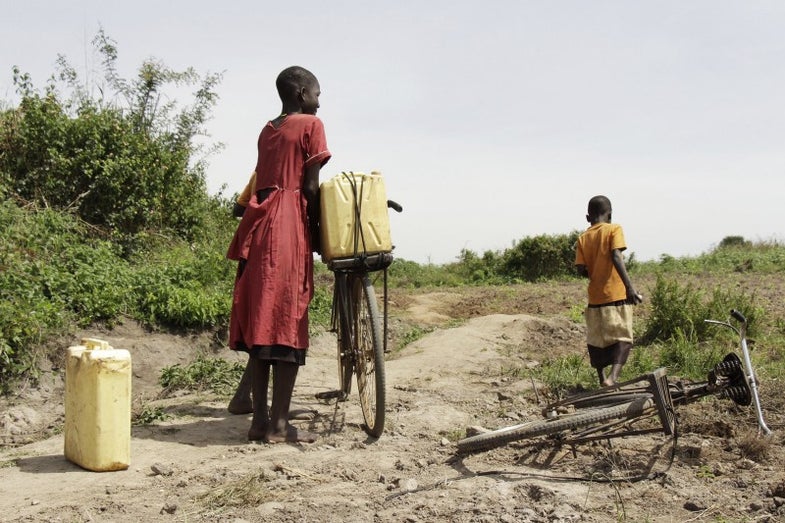 Human survival depends on access to water. It sustains living bodies and nourishes the land. Wars have been waged over water, often called “blue gold,” for centuries. So it’s not surprising that prolonged drought renders societies volatile.

When drought strikes a particular part of the world — especially in developing nations — agricultural production decreases, incomes drop, food becomes hard to come by and prices rise. All of this amplifies the potential for rioting. Climate change will exacerbate drought in already arid regions, especially in the summer — and likely lead to more violence.

“It is thus plausible that water riots will contribute to full-blown civil conflicts, which of course has implications for international security — that is, terrorism,” said Jérémy Lucchetti, a professor of economics at the University of Geneva and author of a recent study documenting the relationship between drought and riots.

“We can expect an increase in violence linked to water scarcity if no policies aimed at mitigating the effect of climate change are implemented,” he added. That could mean cultivating drought-resistant crops, investing in irrigation or developing tools to help soil retain water.

To be sure, the situation is especially fragile in places like sub-Saharan Africa, the Middle East, India, China and elsewhere, while developed nations such as the United States have been spared. But this could change, he said.

“Water scarcity is creating… tensions as well in industrialized countries, even if their more developed infrastructures and institutions allow them to buffer the link between water scarcity and extensive riots,” Lucchetti said.

The research, which appears in the Journal of Environmental Economics and Management, is believed to be the first to establish what scientists have long assumed — a valid link between drought and riots. However, while drought is a significant influence, it isn’t the only one, Lucchetti stressed. “In order of importance, it is political, economic and social causes that create tension,” he said. “Droughts are a factor that add fuel to flames that are already burning.”

The scientists, collaborators from the University of Geneva, the University of Lucerne and Heidelberg University, studied almost 1,800 riots that unfolded over two decades in sub-Saharan Africa, observing a systematic connection between the sudden loss of water and the outbreak of unrest.

“Sub-Saharan Africa is particularly vulnerable to unusually dry weather conditions: as much as 95 percent of the crops that are cultivated are rain-fed, while only 5 percent of all cultivated land is suitable for irrigation,” Lucchetti said.

Until now, most data on water scarcity and riots has been too aggregated to establish a link, even when examining the average annual amount of rainfall for each country along with the rise of violence, the researchers said. Part of the problem was that the data did not include the quantity of water actually required by the populations, nor was it easy to study the riots, which tend to be local in nature, and usually shorter and more explosive than civil conflicts. Each conflict required examination in more detail, according to the region, climate and populations, the scientists said.

The researchers analyzed conditions in 43 sub-Saharan countries with a minimum of one million inhabitants, using a drought indicator devised by hydrologists, which measures precipitation in a given month over a region and subtracts the amount of water lost through evaporation. They then cross-referenced these data with those from the Social Conflict Analysis Database, which lists the specifics of 1,800 incidents of rioting between 1990 and 2011.

In some cases, a region might see both drought and conflict, but one didn’t cause the other, Lucchetti said. “Rebel groups, for instance, that take up position outside a capital in a desert area may cause riots without there being a direct link with a drought in the region.”

Researchers found that drought increases the overall probability of rioting by 10 percent in a given month, whether that drought afflicts a desert or a grassland, and regardless of whether it is close to a city. “But if you cross-reference other geographical and social factors, this percentage rises dramatically,” Lucchetti said. “In fact, three key elements play a leading role in the likelihood of drought-related riots.”

Scientists also found that drought-related conflicts often occur in the same month as the onset of a water shortage. “We now have to use this data to examine in detail what mechanisms could be put in place by political institutions to avoid riots, such as setting up redistribution systems in areas affected by drought,” Lucchetti said.