And why the forecast involves a lot of waffling. 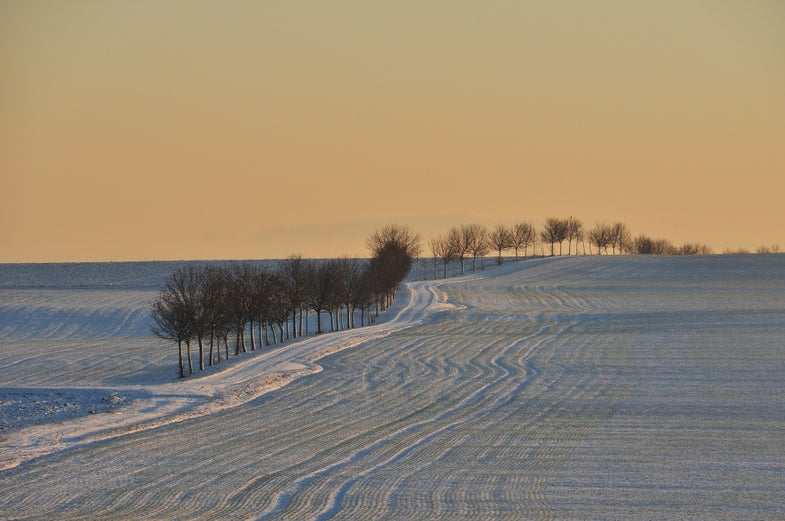 Every year—around October, if we’re not especially impatient—we get excited for the snow forecast. Summer has finally faded (kinda) and there’s a chill in the air (sorta). All we want to know is whether we’ll get a big ol’ snowstorm that forces us to snuggle up inside with endless hot chocolate and zero obligations.

So, sorry in advance. This isn’t that kind of forecast—the one you want doesn’t exist.

Meteorologists use sensors placed around the globe, both on the surface and inside satellites high above, that feed into supercomputers to create intricate weather models. They do this in an attempt to predict what the climate will look like a few months from now, but they still can’t tell us whether Boston will get a snow dump this year. The fault is not in our meteorologists, but in our atmosphere.

Weather is chaotic in the truest sense of the word. The father of chaos theory, Edward Lorenz, pioneered the world of weather prediction and coined the term “butterfly effect” to describe climate systems. He discovered that even minuscule differences in the initial conditions of a model will produce drastic changes in the outcomes (a butterfly flapping its wings turns into a hurricane, yada yada yada). Since Lorenz’s work in the 1950s and 60s, meteorologists and their computer simulations have produced better and better predictions. But they simply cannot and will not give us a definitive forecast this far out. Not yet, anyway.

What they can do is offer a general outlook. There are a lot of common weather patterns, and by using observations of current conditions scientists can estimate what each winter will look like—but there are no guarantees.

The current climate looks like it’s developing into a La Niña system, which would mean a winter much like last year’s—but perhaps less extreme. A cooling patch of the Pacific Ocean will shift the polar and Pacific jet streams to bring cold, wet weather to the north and warm, dry weather to the south. Generally speaking, anyway. We’re likely to experience a weak La Niña year, so the effects won’t be too intense, but NOAA researchers have yet to confirm whether the system has fully developed. They need a couple more months of data collection to do that.

Odds are that the La Niña watch will turn into an advisory, which means all the necessary conditions have been observed. But Mike Halpert, deputy director of NOAA’s Climate Prediction Center, doesn’t think it’s likely to develop beyond a weak system. Even if it turns into a moderately strong one, he says, the forecast isn’t going to change all that much. If anything, meteorologists would just become more confident in the prediction they’ve already made. The only significant changes will come if the La Niña system fails to develop entirely, in which case everything is kind of up in the (literal and metaphorical) air.

You might notice that this forecast totally fails to make a call for or against a particularly snowy year. That’s because NOAA doesn’t provide snow predictions for the winter. Meteorologists still can’t accurately call snowstorms a week out—let alone for an upcoming season. Whether or not an area gets snow or rain depends too much on local conditions, and it only takes a variation of less than one degree Fahrenheit for a heavy snowfall to turn into a downpour.

The only thing forecasters can really say for now is that should the La Niña persist, snowstorms tend to move to the north and west. That would mean more precipitation inland in the Northeast and less along the coast and in the mid-Atlantic. But again—that’s just an estimation. Should the right butterfly flap its wings in Beijing, we may see a blizzard.