Power Ingestible Gadgets With Batteries You Can Eat

As a non-toxic way to use swallowable medical devices 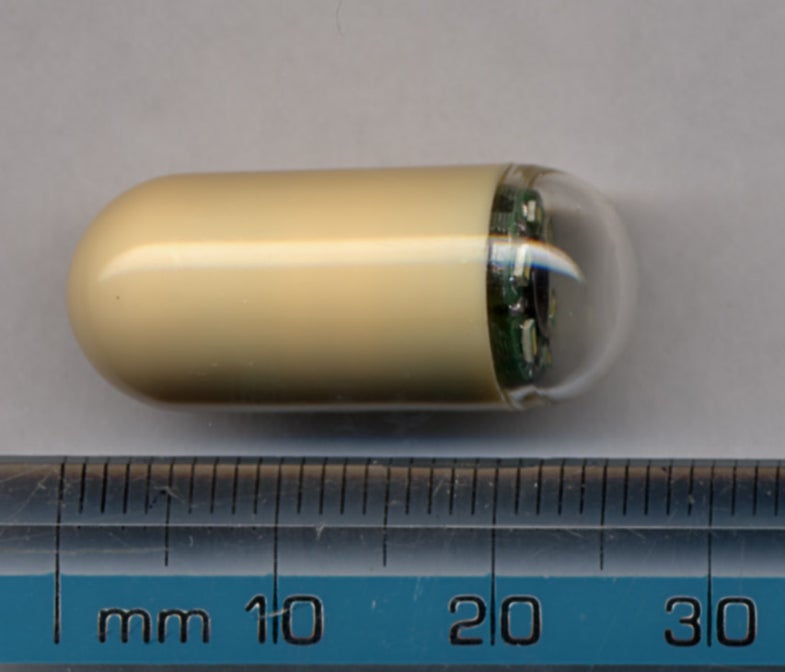 Today, implanted medical devices continuously monitor the body to give doctors and researchers more information than ever about the state of a patient’s disease and the effects of certain treatments. Engineers have also been making devices that a patient can swallow, which lets doctors and patients avoid risky surgical and other invasive procedures when able. Ideally, these devices would continuously monitor conditions inside the body or release drugs, and, once they’ve done their job, they would pass through the body without harming it. While some devices are on the market today, one of the biggest technological impediments to these devices is finding a non-toxic power source. The best solution might be to create a battery that uses the unique chemical environment inside the body to function and to construct the battery using metals that the body already needs, according to a review published today in Trends in Biotechnology by Christopher Bettinger, a researcher from Carnegie Mellon University.

Ingestible devices are often called semi-invasive–they travel inside the body and can collect much of the same data that implanted devices can, but don’t carry many of the same risks. The earliest devices from the 1970s were made of silicon and could collect information like body temperature and the pH of certain regions of the gastrointestinal tract; today, they are smaller and much more sophisticated, even following how a drug breaks down in the body.

But these gadgets carry their own risks–they could get stuck and cause an intestinal blockage, or they could break and leak toxic chemicals into the body–these risks become much more likely if the patient has intestinal issues caused by inflammation from diseases like Crohn’s Disease or Ulcerative Colitis. The main area of concern is the battery. These devices are often powered by lithium ion or silver oxide batteries, which can be toxic if a person is exposed to them in high concentrations. To make batteries less toxic, researchers are working on making a new kind of battery that uses naturally occurring compounds and non-toxic metals. Gastric acid could provide the chemical medium to power the device and the remaining components could be made of biodegradable metals that the body already needs, like magnesium, calcium, or sodium.

So far, researchers are making some progress. But getting these new power sources to work has been fairly challenging–it’s hard to find a metal that doesn’t do the body harm but at the same time doesn’t rapidly corrode or break down in the harsh chemical environments of the stomach and intestines. But if researchers can make a better battery, the semi-invasive devices could have many more applications, such as improving scientists’ understanding of the gut microbiome and employing treatments that can be released in a specific part of the body.

“There are many rapid advances in materials, inventions, and discoveries that can be brought to bear on medical problems,” Bettinger, the author of the study, says in a press release. “If we can engineer devices that get the most mileage out of existing drugs, then that is a very attractive value proposition. I believe these devices can be tested in patients within the next 5-10 years.”