Aaron From ‘The Walking Dead’ Talks About Surviving A Zombie Apocalypse

Actor Ross Marquand on walkers, nerd-dom, and big-box stores, in our Q&A 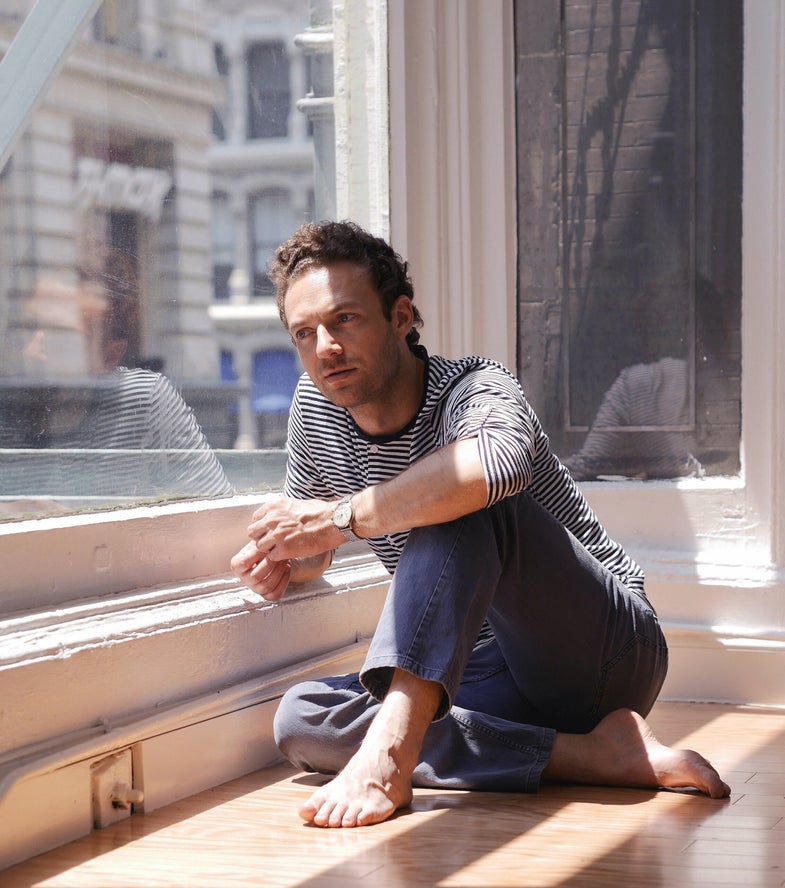 Let’s assume you know what The Walking Dead is. AMC’s zombie drama is the No. 1 show on cable television, and the most watched cable series of all time. Season six starts next week, and we, the nerds of Popular Science, are too ready.

Ross Marquand joined the cast of TWD in the second half of season five as Aaron, the altruistic former relief worker who mysteriously appeared in order to recruit Rick and his group for the Alexandria Safe Zone outside Washington, D.C. Initially mistrusted by Rick & Co. (“stranger danger!”), after several episodes, Aaron has become a friend and ally, and—spoiler alert!—was last seen returning to Alexandria with Daryl and Morgan just in time to witness Rick’s execution of Pete.

We spoke to Marquand about how some of the cooler stuff on the show gets done, his nerdy pastimes, and his thoughts on how best to survive an undead apocalypse.

Popular Science: This is an action-packed show; how much of what you shoot is stunts versus special effects? Is it easy for everyone to stay safe? Not to mention, you’re in Georgia—it’s hot!

Ross Marquand: Our crew tries to use as many practical effects as possible, but if you’re, say, decapitating a walker with a license plate—that could get tricky without the use of CGI. And yes, even though we tackle so many wild stunts, safety is always our primary concern. If we’re chopping off heads or stabbing walkers, we usually just hold a soft-hilt replica of our weapon, and the SFX team adds in the rest later. Unfortunately, they still haven’t figured out a way to CGI-out the Atlanta heat—it’s pretty brutal.

PS: How long does it take the average walker to get into makeup? What can you tell us about that process?

RM: The stunt people and extras who play more-featured walkers—we call them “hero walkers”—are in hair and makeup for three to four hours. A walker in the back might take only an hour or two. Greg Nicotero’s team of incredibly talented SFX makeup artists are the best in the business, and the sheer amount of work they do on a daily basis is jaw-dangling. They sometimes prepare hundreds of actors for each episode—and one does not simply stroll onto set looking like the undead, no matter how rough their night was. It requires multiple layers of prosthetics, liquid latex, wigs, contact lenses, and dentures—all masterfully applied by a surprisingly small group of badass professionals.

PS: There’s an astonishingly creative level of mayhem on this show. Are the awesomely disgusting ways you can kill a walker dreamed up entirely by the writers or do the actors have any input?

RM: Yes! Such lovely, gory mayhem. There are some times when we as actors offer ideas, but most of the crazier walker deaths—flaring one up like a jack-o’-lantern, or impaling one on a goat’s horn—are concocted by our wonderful writers.

PS: That said, has the portrayal of extreme violence had any kind of effect on you? Does spending every day in dystopia ever become disorienting? I mean, how do you unwind after you’ve spent the day crushing a zombie’s head in the car door?

RM: Ironically, I’ve found that the subject matter actually makes all of our cast and crew a bit lighter; you need to have a sense of humor being on such a heavy show or you could easily go down an undead rabbit hole of despair. I usually decompress—doubly ironically—by killing zombies on my Xbox. I love playing zombie mode on Call of Duty: Advanced Warfare. We are creatures of habit, it would seem.

PS: Have you become desensitized to gore?

RM: Not at all. There are still times where I see an emaciated, decaying walker and think, “My goodness, what a terrible mess.” And I dislocated my pinky toe recently—it was hanging at a disturbingly acute angle, and it totally freaked me out. But then I started laughing at the cartoonish sight of it, so yeah, maybe I am a little desensitized.

PS: Let’s talk about Alexandria, which your character is a big part of; those episodes reminded me of an episode of The Twilight Zone: a walled-off community living in total denial of the horrors (in this case, literal horrors) just outside their door. It’s an interesting experiment in social psychology. Or are they just another group of survivors gone mad?

RM: Definitely interesting! I think the folks in Alexandria certainly lucked out in many regards—most of them happened to know about the township before the apocalypse, or were just fortunate enough to be near the well-stocked subdivision once society came tumbling down. I think it seems totally plausible, I’m just not sure how most folks would cope.

PS: What preparation did you do to play a survivor in a post-apocalyptic world?

RM: I’m from Colorado, and camping has always been a part of my life. Having grown up in Scouts, we learned how to survive attacks by wild beasts, starvation, exposure…so I just pretended Aaron was an Eagle Scout himself, and that has helped me shape the character a great deal.

RM: Oh, most definitely. Ever since I was a wee lad I’ve been fascinated with all things nerd. Astrophysics, Star Wars, 2001, Vonnegut, They Might Be Giants, Ender’s Game, Battlestar…that’s my jam right there. Hell, I even wrote and produced a musical version of Tron in college. I haz serious nerd cred.

PS: Million-dollar question: What would you do in a zombie apocalypse?

RM: I’d find the nearest Costco, secure it, and become king of my domain. Seriously, if you had just one Costco, you’d be set for life!

PS: Earlier this year, a team from Cornell University did a study indicating that the safest place in the U.S. to be during a zombie outbreak would be the high northern Rockies—areas of sparser population mean fewer humans to bite, slowing the spread. What do you think?

RM: I’ve been saying this for years! If the excrement hits the air conditioning, I’m definitely going to head to my aunt’s cabin in the mountains outside Denver. I think there’s even a Costco nearby.