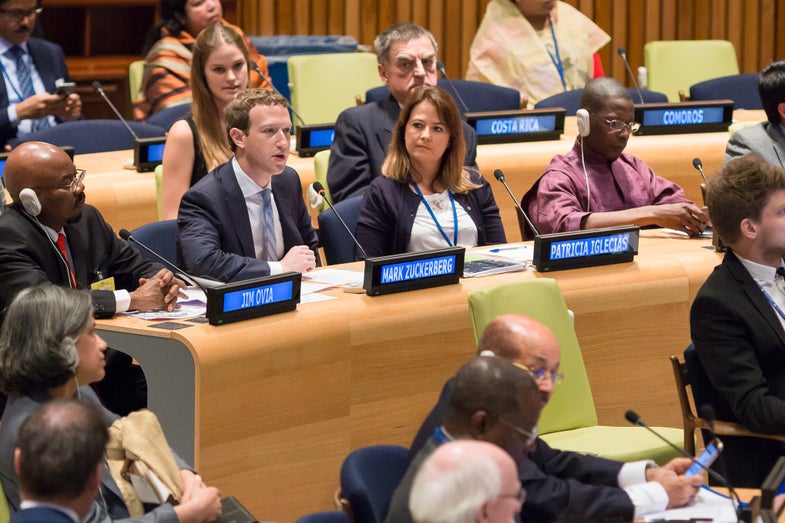 Saturday’s assembly of the United Nations brought speakers from all walks of life, among them Nobel Prize Laureate Malala Yousefzai, Pope Francis, and even Facebook founder and internet advocate Mark Zuckerberg.

Zuckerberg actually spoke before the UN twice on Saturday, once before the Private Sector Forum, and then again to the UN Sustainable Development Summit, to state that internet access has become a universal right of world citizens, continuing his history of lobbying for worldwide connectivity.

“When communities are connected, we can lift them out of poverty,” Zuckerberg said. “We can and must do more.”

In partnership with ONE, a global nonprofit that aims to eliminate poverty, and supported by the Bill and Melinda Gates Foundation, U2’s Bono, Sir Richard Branson, TED, and many more, Zuckerberg said that the first priority in connecting the world is to start with refugee camps, which have recently put extreme poverty in the public eye.

An op-ed in the New York Times, written by Zuck and Bono, addressed the same issue. They cite the image of the child who had died and washed up on a Turkish beach, that not only changed popular opinion, but policy on harboring refugees. The image was wide-shared across social media, and spurred online petitions that brought commitments from politicians like Britain’s David Cameron. Technology has played a key role connecting families across “checkpoints and razor wires,” they say, but for this to happen, infrastructure needs to be in place.

However, the Facebook founder highlights a multi-prong approach to reach the 4 billion people who lack Internet access, with initiatives from himself, governments, and the UN.

Zuckerberg’s most direct line of involvement is through Internet.org, the group he founded in August 2013 to combat this issue. They have been most publicly recognized for plans to launch drones that beam Internet from the sky. In May, Internet.org launched a platform for free web development, with guidelines to make the sites easy to view even for those with weak internet connections. Then last week, that platform was updated and named Free Basics, giving more than one billion people expanded access to free internet services.

President Obama’s Power Africa plan, which aims to bring 60 million new electric connections to the continent, was praised in the op-ed as an example of how governments could support this goal. The UN has more directly fallen in line with Zuckerberg’s idea of the future, adding a specific target to connect every world citizen by 2020.

But Zuck’s campaign this week hasn’t been just speeches. He also met with President Xi Jinping of China at a State Department dinner, and India Prime Minister Narendra Modi at home in Menlo Park to discuss internet connectivity. Facebook is still banned in China, but Internet.org is active in India, and partnered with local businesses to provide free web services.

Although not many substantive issues were discussed in the public conversation, Zuckerberg did reminisce on advice from his mentor Steve Jobs, who told him to travel to India and visit a specific temple.

Zuckerberg has obvious interest in a more connected world—the more internet users, the more Facebook users. That means more avenues for revenue. But throughout all these public appearances, he maintains that this mission not personal, but to help the world’s poor.

“There are more than 4 billion people who need to be connected,” he said in a video announcing the Internet.org platform. “And if we can connect them, then we’ll raise hundreds of millions of people out of poverty.”