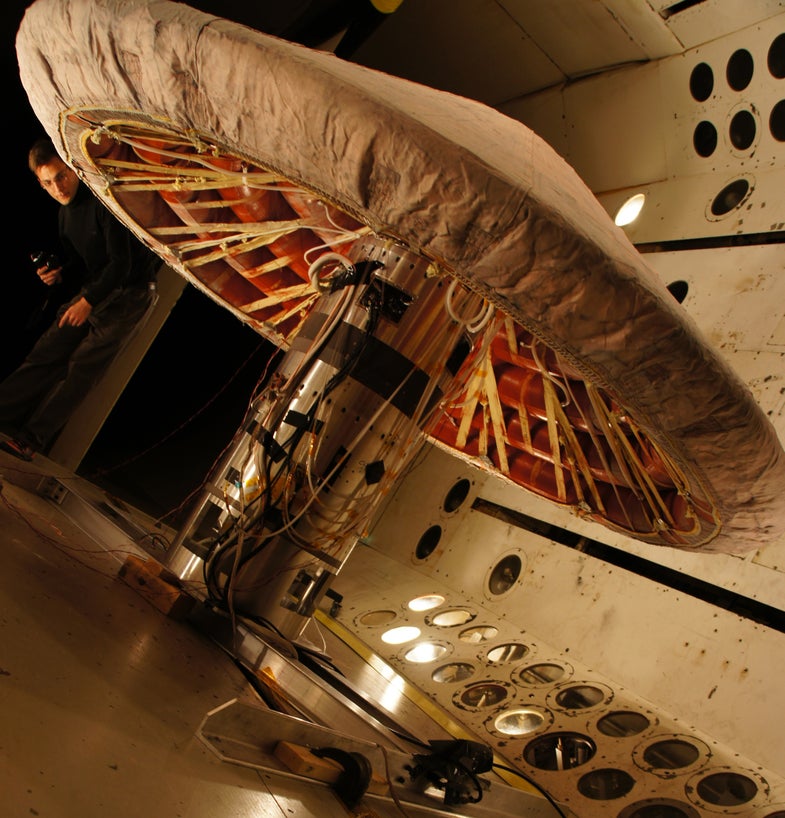 NASA’s inflatable heat shield took another big step forward early this morning when its Inflatable Reentry Vehicle Experiment (IRVE-3) came screaming through the atmosphere and splashed down in the Atlantic after spending 15 minutes undergoing the intense heat and pressure of atmospheric reentry. Launched from Wallops Flight Facility in Virginia, the IRVE-3 mission further demonstrated that an inflatable heat shield can protect a space capsule as it enters the atmosphere at hypersonic speeds.

IRVE-3 consists of a series of un-inflated rings packed into a cone and wrapped in layers of heat resistant materials, creating a kind of thermal blanket around an incoming spacecraft. At 7:01 a.m. local time this morning, this package was hurled skyward aboard a Black Brant rocket to suborbital altitudes at speeds reaching 7,600 miles per hour. About six minutes in, the 680-pound aeroshell separated from the rocket at about 280 miles up.

At this point, IRVE-3 rapidly pumped nitrogen into its aeroshell, expanding it from a conical package that fit inside the Black Brant’s 22-inch-diameter nose cone into a 10-foot-diameter mushroom-like heat shield. Onboard cameras and sensors captured the entire 20-minute mission in realtime–a mission that NASA is calling an unqualified success.

IRVE-3 is part of NASA’s Hypersonic Inflatable Aerodynamic Decelerator (HIAD) Project, which aims to provide the agency with a less-expensive and modular means to return space capsules–those carrying cargo from the International Space Station, for instance–to Earth safely despite the high forces and temperatures that act on them during reentry. Doing so could make travel to and from earth orbit far more economical while also providing a tested and certified platform that could be readily adapted to various spacecraft to ensure safe reentry.