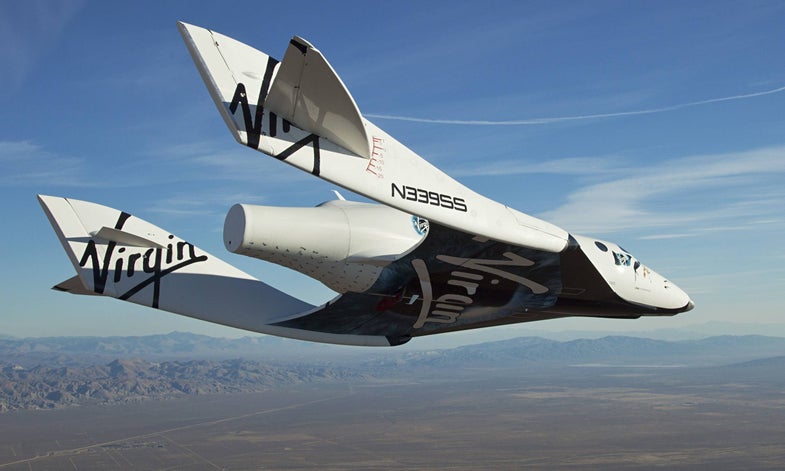 There’s a growing, looming shadow over the private spaceflight industry this year. Virgin Galactic’s SpaceShipTwo, a suborbital rocket designed for tourists, crashed on Friday, Oct. 31 due to an “in-flight anomaly” during a powered test flight over the Mojave Desert.

Although the company hasn’t specified what anomaly caused the fatal failure, multiple on-the-ground reports indicate it happened shortly after SpaceShipTwo detached from its WhiteKnightTwo carrier craft and ignited a newer, plastic-based rocket fuel.

The incident marks this week’s second high-profile disaster for the private spaceflight industry, following the explosion of Orbital’s Antares rocket shortly after liftoff on Tuesday.

See below for the latest updates to this story.

Kern County sheriff identified the surviving pilot as Peter Siebold. It is not yet known how Siebold escaped the vehicle, but he parachuted to safety and is receiving medical care for a shoulder injury.

Sir Richard Branson, founder of Virgin Galactic, gave the following statement during a press conference in the Mojave Desert:

Virgin Galactic and Scaled Composites just held a press conference regarding the SpaceShipTwo crash. Representatives for the companies did not release the names of the pilots, the number of flights SpaceShipTwo has flown before, or what they think caused the malfunction. However, they did say that they would be cooperating fully with the National Transportation Safety Board to determine what went wrong.

The conference did end on a hopeful note regarding the importance of pursuing commercial spaceflight: “Stay the course; this business is a worthy business. This business is not easy. If it was easy, it wouldn’t be interesting,” “I equate it to the Magellan mission,” said Stuart Witt, the chief executive of the Mojave Air and Space Port.

Joel Glenn Brenner, a former Washington Post reporter, did a telephone interview with CNN, talking about her experiences with Virgin Galactic. Brenner has been covering the company and is currently writing a book about SpaceShipOne. She had a few harsh words to say about the readiness of the SpaceShipTwo spacecraft. “This engine that exploded today, even if they had had a successful flight and even if they had not stolen my friend’s life, they would not have ever gotten anywhere near space with this engine,” said Brenner.

She also went on to say that the crash of SpaceShipTwo marks a huge setback for Virgin Galactic . “They do not have any vehicle anywhere near completion. This really marks the end for what they can do.”

According to Spaceflight Now, first responders to the scene indicated that there was wreckage from a crashed aircraft. Eye witnesses also report seeing the explosion and subsequent debris.

It’s assumed that two pilots were aboard SpaceShipTwo, as most test flights of the spacecraft include two pilots. ABC7 reports that one person was taken away from the scene on a stretcher.

Designed for space tourism, SpaceShipTwo is the followup to Virgin Galactic’s SpaceShipOne, which was the winner of the $10 million Ansari X Prize in 2004. Powered by a rocket motor, it is meant to take passengers to the edge of space and then glide back down to Earth, landing on a runway like a plane. In May 2014, Virgin Galactic announced that SpaceShipTwo would be switching fuel types for its rocket engine — utilizing a plastic-based propellant rather than a rubber-based one.

The FAA has released an official statement about the incident:

“Just after 10 a.m. PDT today, ground controllers at the Mojave Spaceport lost contact with SpaceShipTwo, an experimental space flight vehicle. The incident occurred over the Mojave Desert shortly after the space flight vehicle separated from WhiteKnightTwo, the vehicle that carried it aloft. Two crew members were on board SpaceShipTwo at the time of the incident. WhiteKnightTwo remained airborne after the incident. The FAA is investigating. Please contact Scaled Composites about the condition of the crew members.”

The FAA announced that airspace “from the surface up to and including 12000 feet” is closed to provide a safe environment for rescue. Local news from Bakersfield revealed what the crash site looks like: 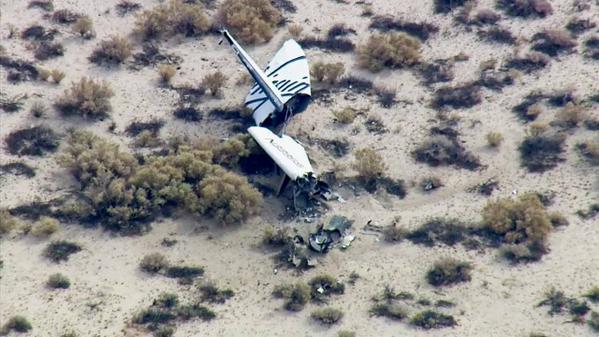 A Piece Of SpaceShipTwo Wreckage

The California Highway Patrol has an update on the pilots:

“Virgin Galactic’s partner Scaled Composites conducted a powered test flight of SpaceShipTwo earlier today. During the test, the vehicle suffered a serious anomaly resulting in the loss of the vehicle. The WhiteKnightTwo carrier aircraft landed safely. Our first concern is the status of the pilots, which is unknown at this time. We will work closely with relevant authorities to determine the cause of this accident and provide updates as soon as we are able to do so.”

The WhiteKnightTwo is a cargo aircraft used to lift the SpaceShipTwo.