Certain weather makes you more likely to get a rattlesnake bite

When it rains, it pours (snakes). 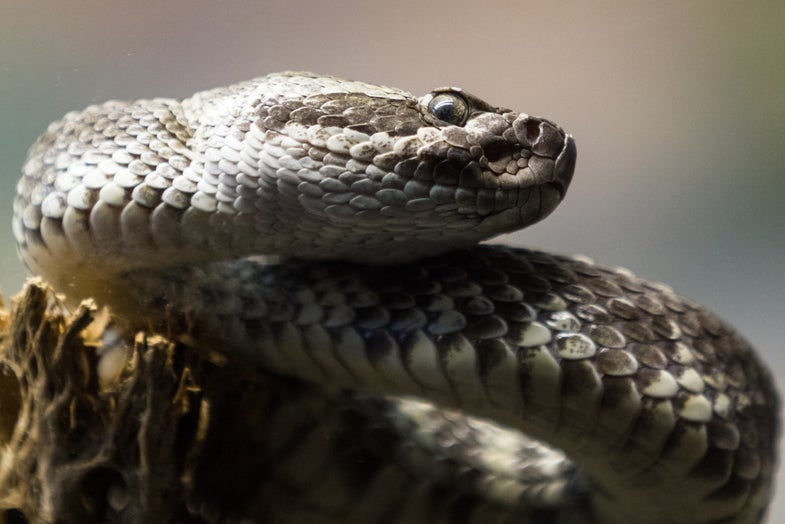 If you’ve ever gone hiking or trail running around the wilderness of the Western U.S., you’ve almost certainly been warned to be wary of venomous snakes. A new study suggests you might be better off venturing into the wild during times of drought. In findings published in the journal Clinical Toxicology on Tuesday, a team of scientists analyzed 20 years worth of snakebite data accumulated throughout California to determine that rainfall correlates with a rise in snakebite incidences in humans, directly contradicting a long-held assumption that venomous snakes were more aggressive during dry spells.

During the drought of 2015, Grant Lipman, a professor of emergency medicine at Stanford University, was running through the Santa Clara mountains in California when he noticed a warning sign for rattlesnakes, which he had never seen before. “Three miles later, I saw a large rattlesnake lying across the path,” he says. “A week later, my fellow saw the same thing, during a trail run in a different area.”

He began to consider why there might be more snakebite during a drought. “The popular press was riddled with articles and publications about snakebite increases during drought,” he says. “However, there was no science in North America showing this to be true.” Lipman and his colleagues got to work to study the impact and relationship of extreme weather events on snakebites, and what this meant for human health.

They dove into 5,365 cases of rattlesnake bites reported to the California Poison Control System between 1997 and 2017 and compared these incidents with climate data taken by NASA and the National Drought Mitigation Center, looking at temperature patterns, precipitation, and drought indicators.

Using a predictive algorithm that assessed how climate change can impact disease and injury rates, Lipman and his team found that every 10-percent increase in rainfall over an 18-month period led to a rise in snakebites by about 4 percent across California. Moreover, snakebite reports hit lows in 2015 and 2016 when the state faced a particularly nasty drought.

Study coauthor Caleb Phillips from the University of Colorado adds that while they controlled for the usual gamut of variables (like unusual population changes or weather events), the team wasn’t able to control for changes like trends in outdoor recreation. But it’s important to remember the data only accounts for reported bites, and that while 4 percent can seem small, it still means a double-digit difference in reported cases. A rattlesnake bite can be fatal if proper treatment isn’t found, and the recovery process carries its own toll of expense and hardship.

More importantly, the results upend one conventional assumption about wildlife—an assumption with no real scientific backing. The original theory went that a drought means less available food, incentivizing snakes (and other wildlife) to get more ferocious and hunt with more tenacity. Instead, we see the opposite is true: greater rainfall leads to more shrubbery and flora, which provides more food for rodents and other prey, which does indeed lead to more food for snakes. But more food for snakes means more snakes, which would encourage more snakebites. According to Lipman, this trend is similar to previous conclusions found in the study of weather patterns and rodent populations responsible for the spread of Hantavirus.

“The conclusions match exactly what I would expect,” says William Hayes, a biologist at Loma Linda University in California who was not involved with the study. “With reduced rattlesnake reproduction [caused by drought], the snake populations decline and there are fewer snakes—especially baby snakes—to inflict snakebites.” According to Hayes, who previously sought to debunk the “more drought, more snakebites” myth in a 2010 paper, 82 percent of rattlesnake bites in southern California are caused by young snakes, which are typically born in the fall when the North American monsoon is finally tapering off.

Still, Hayes, who’s extensively researched snakebite severity and treatment, emphasizes the results should not blow out of proportion the threat that rattlesnakes do or do not pose. “Rattlesnakes are shy, inquisitive, non-confrontational creatures who want nothing to do with us,” he says. “They respond to us with fear and defend themselves by biting only as a measure of last resort. The odds of surviving a venomous snakebite in the U.S. are pretty close to 99.9%—although you could suffer serious physical injury and run up a half-million-dollar hospital bill.”

More broadly, the study is another indication of how global warming is creating a direct, predictable impact on human injuries. The complexities of climate mean that the North American monsoon might extend into winter, or that we might see an uptick in storm systems hitting the West Coast. Or perhaps droughts will get worse, which is great news for preventing snakebites, but could exacerbate predatory behavior in other animals. “There are some deniers of climate change out there, but I have never heard of a snakebite denier,” says Lipman, who wants to use the same algorithm in future studies on the spread of Lyme disease and other emerging tropical illnesses. “Hopefully studies like this can act as a wake-up call to people that our actions that are fueling climate change are leading to measurable impacts on human health.”