New Technology Could Drill Deeper Into the Earth Than Ever Before 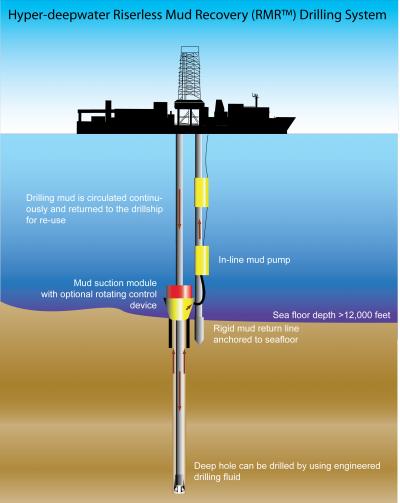 In 2005, we came the closest we ever had before to drilling into the mantle: the layer beneath the Earth’s crust. Now, with new drilling technology adapted from the oil and gas industry, scientists might finally be ready to reach that holy grail of depth.

The International Ocean Drilling Project announced today that, with the help of a company called AGR Drilling Services, they have engineered a type of technology called Riserless Mud Recovery (RMR) for extremely deep drilling. RMR allows for a closed drilling system — where the mud and drilling fluid are kept separate from surrounding seawater — without the need for risers surrounding the drill to draw mud up to the surface. Althought it was originally designed as a shallow water drilling system for oil and gas collection, the IODP says their development has made RMR a good tool for drilling in deep water as well.

Deep water can mean a thinner crust beneath, and a better chance of pushing all the way through to the mantle, and feasibility studies have shown that a current IODP research ship could use RMR drilling in water depths up to 9,000 feet with only a little modification. Drilling at 12,000 feet would be possible with the use of an underwater vehicle that could connect the drilling equipment under water, according to a report made in May 2009.

To crash into the Mohorovičić discontinuity — the boundary layer between crust and mantle, nicknamed the Moho — scientists would have to reach those depths and then proceed another 3-6 miles through the earth’s crust. Though the IODP doesn’t have any missions to the Moho planned right now, deep-water RMR holds great promise, they report.