This is a seal with an eel stuck up its nose 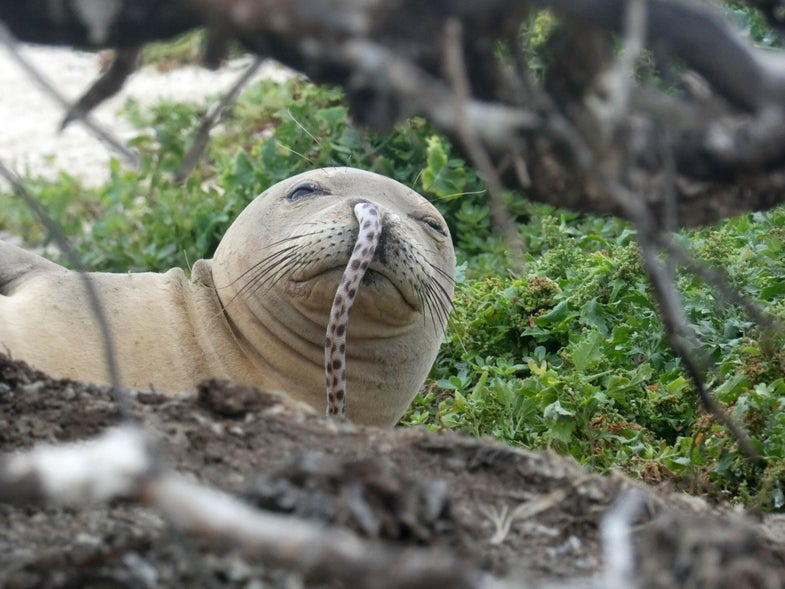 Folks with the National Oceanic and Atmospheric Administration (NOAA) spotted what looks like a lazy attempt at a narwhal disguise on a juvenile Hawaiian monk seal in the Northwestern Hawaiian Islands. A blog post explains that while NOAA only started seeing seals with morays in their muzzles a few years ago, they’ve now spotted such schnoz shenanigans on several separate occasions. This might just be because scientists are doing more efficient seal-peeping than they did in previous decades, but it’s possible they’re witnessing the signs of some strange teen trend in the seal world. It wouldn’t be the first time the juveniles of a species got turned on to a bizarre interspecies interaction. (Don’t judge them; humans have put eels in worse places.)

But because seals look for food by shoving their snooters into dark nooks and crannies, it’s not hard to imagine this sort of thing happening by mistake as a frantic spotted eel tried to escape the searching snuffles of a potential predator. Alternatively, NOAA writes, perhaps the seal consumed and then regurgitated the smaller animal a little awkwardly—the same way you might wind up with spaghetti hanging out of your nose if you happen to be eating pasta when you first read about the time doctors had to surgically remove an eel from someone’s butt.

NOAA researchers wrote on Facebook that no seals have ever suffered ill effects after the removal of these ersatz boogers. “The eels, however, did not make it.”